Edward Trowbridge Collins, Sr. (May 2, 1887 – March 25, 1951), nicknamed "Cocky", was an American Major League Baseball second baseman, manager and executive. He played from 1906 to 1930 for the Philadelphia Athletics and Chicago White Sox.

Under the win shares statistical rating system created by baseball historian and analyst Bill James, Collins was the greatest second baseman of all time.

A native of Millerton, New York, Collins was a graduate of Columbia University (where he was a member of Beta Theta Pi Fraternity), at a time when few Major League players had attended college.

As a player, Collins was renowned for his solid batting skills and speed on the basepaths.

He broke into the majors on September 17, 1906 with the Philadelphia Athletics.[1] After spending all but 14 games in 1907 in the minor leagues,[2] he played in 102 games in 1908 and by 1909 was a full-time player. That season, he registered a .347 batting average and 67 steals. He would also be named the A's starting second baseman in 1909, a position he would play for the rest of his career, after seeing time at second, third, short, and the outfield the previous two seasons. In 1910, Collins stole a career-high 81 bases and played on the first of his four World Series championship teams. 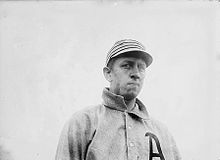 Collins was part of the Athletics' so-called "$100,000 infield" (and the highest-paid of the quartet) which propelled the team to four American League (AL) pennants and three World Series titles between 1910 and 1914. He earned the league's Chalmers Award (early Most Valuable Player recognition) in 1914.

In 1914, the newly formed Federal League disrupted Major League contract stability by luring away established stars from the AL and NL with inflated salaries. To retain Collins, Athletics manager Connie Mack offered his second baseman the longest guaranteed contract (five years) that had ever been offered to a player. Collins declined, and after the 1914 season Mack sold Collins to the White Sox for $50,000, the highest price ever paid for a player up to that point. The Sox paid Collins $15,000 for 1915, making him the third highest paid player in the league, behind Ty Cobb and Tris Speaker.

In Chicago, Collins continued to post top-ten batting and stolen base numbers, and he helped the Sox capture pennants in 1917 and 1919. He was part of the notorious "Black Sox" team that threw the 1919 World Series to the Cincinnati Reds. However Collins was not accused of being part of the conspiracy and was considered to have played honestly (his low .226 batting average notwithstanding).

In August 1924, he was named player-manager of the White Sox and would hold the position through the 1926 season, posting a record of 174-160 (.521). He then returned to the Athletics in 1927, but his playing career was basically over as he would go on to become a full-time pinch hitter for the A's and get only 143 plate appearances his last four years. Following the 1930 season, Collins retired and immediately stepped into the position as coach for the A's. After two seasons as a coach, Collins was hired as the general manager of the Boston Red Sox. Remaining the GM through the 1947 season, he continued the team's policy of not signing black players (an unofficial league-wide policy that stayed in place until Jackie Robinson's signing by Brooklyn Dodgers GM Branch Rickey and Robinson's debut with the AAA Montreal Royals in 1946). Author Howard Bryant writes that Collins' prejudice also extended to Jews and Catholics.[3]

Collins finished his career with 1,300 runs batted in. To date, Collins is the only MLB player to play for two teams for at least 12 seasons each. He was inducted into the Baseball Hall of Fame in 1939. In 1999, he ranked number 24 on The Sporting News' list of the 100 Greatest Baseball Players, and was a nominee for the Major League Baseball All-Century Team.

His son, Eddie Jr., was an outfielder who briefly saw major league action (in 1939 and 1941-42, all with the A's) and later worked in the Philadelphia Phillies' front office.