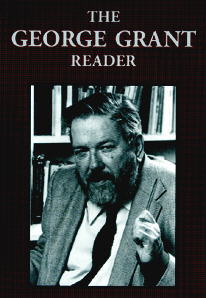 George Parkin Grant OC, D.Phil., FRSC (, , - Halifax, Nova Scotia, , ) was a Canadian philosopher, teacher and political commentator, whose popular appeal peaked in the late 1960s and 1970s. He is best known for his , political , comments on , faith, and his conservative views regarding .

Academically, his writings express a complex meditation on the great books, and confrontation with the great thinkers, of . His influences include the "ancients" such as , , and , as well as "moderns" like , , , , and .

Although he is considered the main theoretician of ism, he expressed dislike of the term when applied to his deeper philosophical interests, which he saw as his primary work as a thinker. ["Was George Grant a Red Tory?" "Athens and Jerusalem: George Grant’s Theology, Philosophy, and Politics." Angus, Ian, Ronald Dart and Randy Peg Peters (editors). University of Toronto Press, (2006).]

Grant was educated at and Queen's University where he graduated with a degree. He attended at the on a , a trust his grandfather, George Parkin had headed at one time. Upon winning the Rhodes Scholarship, he enrolled towards a degree in at Oxford, but after ended, and Grant had experienced a deeper personal bond with Christianity, he decided to change studies. His D. Phil was interrupted by the war, and he was already teaching in 's Philosophy department when he completed his thesis "The Concept of Nature and Supernature in the Theology of John Oman" during a year long in 1950. Grant was a faculty member at Dalhousie twice (1947-1960, 1980-1988), (1960-1 resigned before teaching) and 's Religion department (1961–1980), which he founded and led in the 1960s and early 70s. ["George Grant: A Biography" . Toronto: University of Toronto Press, 1993] .

Grant was not readily accepted into the traditional academic community of scholars in Canada. This resistance was provoked by some of Grant's less 'progressive' stances, most notably the definition of philosophy he published in 1949: "The study of philosophy is the analysis of the traditions of our society and the judgment of those traditions against our varying intuitions of the Perfections of God". Especially angered and upset was of the ’s Philosophy department. Grant’s definition is telling, in that it marks his unique take on the philosophy's human perspective, which did not necessarily include assumptions regarding the ‘objectivity’ of science, or the blind acceptance of the Enlightenment’s .

Throughout his career Grant was seen as a unique voice within academic institutions, and thus had strong appeal beyond the strict ‘community of scholars'. In fact, Grant criticized the trend in universities to move away from the ‘unity’ of the traditional to a ‘multi-versity’ comprising separate hives of undergraduate students, graduate students, professional faculties and professors (years before American would become famous for similar themes).

In 1965, Grant published "", where he regretted what he claimed was Canada's inevitable cultural absorption by the . Grant articulated a political philosophy which was becoming known as ism. It promoted the collectivist and communitarian aspects of an older English conservative tradition, which stood in direct opposition to the individualist traditions of , and subsequently .

The subjects of his books, essays, public lectures and radio addresses (frequently on CBC Radio in Canada) quite frequently combined philosophy, religion, and political thought. Grant strongly critiqued what he believed were the worst facets of , namely unbridled technological advancement and a loss of moral foundations to guide humanity. What he proposed in place of the modern spirit was a synthesis of and nic thought which embodied contemplation of the 'good.'

His first book, "Philosophy in the Mass Age" (1959), began as a series of CBC lectures. In it he posed the question of how human beings can reconcile moral freedom with acceptance of the view that an order exists in the universe beyond space and time. In 1965, furious that the Liberal government had agreed to accept nuclear weapons, he published "Lament for a Nation". This short work created a sensation with its argument that Canada was destined to disappear into a universal and homogeneous state whose centre was the United States. "Technology and Empire" (1969), a collection of essays edited by poet and friend Dennis Lee, deepened his critique of technological modernity; and "Time as History", his 1969 , explained the worsening predicament of the West through an examination of the thought of Friedrich Nietzsche. Grant's works of the 1960s had a strong influence on the nationalist movement of the 1970s, though many of the New Left were uncomfortable with Grant's conservatism, his conventional Anglican Tory beliefs, Christian-Platonist perspective, and his uncompromising position against abortion.

Grant's last work was "Technology and Justice" (1986), which he prepared together with his wife, Sheila Grant. His three decades-long meditation on French philosopher 's works lead to the conclusion that there were fundamental moral and spiritual flaws in Western civilization, consigning it to a fate of inevitable collapse. Nevertheless, Grant affirmed his belief that a better civilization could eventually replace

In 1981, he was made an Officer of the for having "become a major force in Canadian intellectual life" [http://www.gg.ca/honours/search-recherche/honours-desc.asp?lang=e&TypeID=orc&id=675] and was also awarded the 's . He was also a Fellow of the Royal Society of Canada.

* [http://clarionjournal.typepad.com/clarion_journal_of_spirit/2006/06/george_grant_la.html A 40th anniversary retrospective of the Lament]
*Review of [http://www.utpjournals.com/product/utq/711/grant88.html Collected Works of George Grant] by Alan Mendelson in "University of Toronto Quarterly".