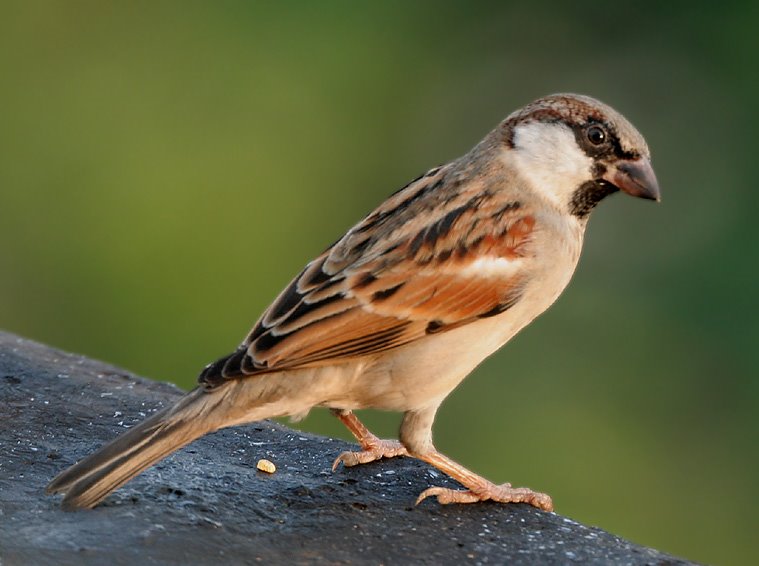 A passerine is a of the order Passeriformes, which includes more than half of all bird species. Sometimes known as perching birds or, less accurately, as s, the passerines form one of the most diverse terrestrial orders: with around 5,093 [ [http://elibrary.unm.edu/sora/Auk/v063n01/p0064-p0069.pdf Ernst Mayr, "The Number of Species of Birds", "The Auk," Volume 63, Number 1 (January, 1946), p.67] ] , it is roughly twice as diverse as the largest of the orders, the ia.

The names "passerines" and "Passeriformes" are derived from "Passer domesticus", the of the – the – and ultimately from the term "passer" for true sparrows and similar small birds.

The evolutionary history of and relationships among the passerine families remained rather mysterious until around the end of the 20th century. Many passerine families were grouped together on the basis of morphological similarities that, it is now believed, are the result of , not a close genetic relationship. For example, the "" of the northern hemisphere, those of , and those of look very similar and behave in similar ways, and yet belong to three far-flung branches of the passerine family tree; they are as unrelated as it is possible to be while remaining Passeriformes.

Much research remains to be done, but advances in and improved paleobiogeographical data are gradually revealing a clearer picture of passerine origins and evolution. It is now thought that the first passerines evolved in at some time in the , maybe around the some 60–55 (mya)Fact|date=April 2008. The initial split was between the , the s, the and the New Zealand "wrens", which must have diverged during a short period of time (some million years at most). The Passeriformes apparently evolved out of a fairly close-knit of "s" which contains such birds as the , , and . [Johansson & Ericson (2003)]

A little later, a great radiation of forms took place out of : the or songbirds. A major branch of the Passeri, "Parvorder ", emerged either as the sister group to the basal lineages and corvoids ("Parvorder "), or more likely as a subgroup of it, and expanded deep into and , where there was a further explosive radiation of new lineages. This eventually led to three major passeridan lineages comprising about 4,000 species, which in addition to the corvoidan clade and numerous minor lineages make up songbird diversity today. There has been extensive mixing, with northern forms returning to the south, southern forms moving north, and so on.

Earliest passerines Perching bird , especially of the limb bones, is rather diagnostic. [See e.g. Boles (1997), Manegold "et al." (2004), Mayr & Manegold (2006)] However, the early fossil record is poor because the first Passeriformes were apparently on the small side of the present size range, and their delicate bones did not preserve well. QM specimens F20688 () and F24685 () from are fossil bone fragments clearly recognizable as passeriform; they represent two species of approximately some 10 and some 20 cm in overall length and prove that some 55 mya, barely into the , early perching birds were recognizably distinct. [Boles (1997)] A quite similar group, the (named for their zygodactylous approach to perching) independently arose at much the same time – and possibly from closely related ancestors – in the landmasses bordering the , which at that time was only some two-thirds of its present width.

Until the discovery of the Australian fossils, it was believed for some time that "" from the (, around 35 mya) was the oldest known passeriform. However, it is now considered a non-passeriform .

Modern knowledge about the living passerines' interrelationships (see the list of families below) suggests that the last common ancestor of all living Passeriformes was a small forest bird, probably with a stubby tail [The last common ancestor of all songbirds most likely had a decidedly longer tail. See del Hoyo "et al." (2003, 2004).] and an overall drab coloration, but possibly with marked . The latter trait seems to have been lost and re-evolved multiple times in songbird evolution alone, judging from its distribution among the extant lineages: the common ancestor of Passerida for example was almost certainly not markedly dimorphic considering the trait is very rare among the basal lineages of these, but very common among the youngest passerid clade, the ; on the other hand among the basalmost Passeri there are a considerable number of strongly dimorphic lineages such as the very ancient as well as many and . Sexual dimorphism is also not uncommon in the and prominent in some suboscines such as the and .

"Wieslochia" was possibly not a member of any extant suborder. That not only the Passeri expanded much beyond their region of origin is proven by an undetermined (Eurylaimidae) from the Early (roughly 20 mya) of , Germany, and the indeterminate Late Oligocene suboscine from France listed above. Even very basal Passeriformes might have been common in Europe until the Middle Miocene, some 12 mya. [Manegold "et al." (2004)] Extant Passeri superfamilies were quite distinct by that time and are known since about 12–13 mya when modern genera were present in the corvoidean and basal songbirds. The modern diversity of Passerida genera is known mostly from the Late Miocene onwards and into the (about 10–2 mya). and early (<1.8 mya) yield numerous extant species, and many yield almost nothing but extant species or their and paleosubspecies.

American fossils
In the , the fossil record is more scant before the Pleistocene, from which several still-existing suboscine families are documented. Apart from the indeterminable -SC-1411 (Pinturas Early/Middle Miocene of Santa Cruz Province, Argentina), [Distal right , possibly suboscine: Noriega & Chiappe (1991, 1993)] an extinct lineage of perching birds has been described from the Late Miocene of California, USA: the with the single genus "". "Palaeostruthus" eurius" (Pliocene of Florida) probably belongs to an extant family, most likely n.

InitiallyFact|date=February 2007 , the Corvida and Passerida were classified as "s" in the ; in accord with the usual practice, they would probably be ranked as s. As originally envisioned in the , they contained, respectively, the large superfamilies Corvoidea and Meliphagoidea as well as minor lineages, and the superfamilies Sylvioidea, Muscicapoidea and Passeroidea.

This arrangement has been found to be overly simplified by more recent research. Since the mid 2000s, literally dozens of studies are being published which try rather successfully to resolve the of the passeriform radiation. For example, the Corvida in the traditional sense were a rather arbitrary assemblage of early and/or minor lineages of passeriform birds of Old World origin, generally from the region of , , and . The Passeri on the other hand can be made monophyletic by moving some families about, but the "clean" three-superfamily-arrangement has turned out to be far more complex and it is uncertain whether future authors will stick to it.

Major "wastebin" families such as the s and s have turned out to be and are being rearranged. Several taxa turned out to represent highly distinct species-poor lineages and consequently new families had to be established, some of them – like the of and the n – with only one living species. [The former does not even have recognized subspecies, while the latter is one of the most singular birds alive today. Good photos of a Bearded Reedling are for example [http://montereybay.com/creagrus/Reedling_bearded-WEH.jpghere] and [http://www.naturephoto-cz.com/photos/mraz/bearded-reedling-05a04012.jpghere] .] . It seems likely that in the Passeri alone, a number of minor lineages will eventually be recognized as distinct superfamilies. For example, the s constitute a single genus with less than 10 species today, but seem to have been among the first perching bird lineages to diverge as the group spread across . No particularly close relatives of them have been found among comprehensive studies of the living Passeri, though it is suspected that they might be fairly close to some little-studied tropical Asian groups. Treatment of the es, s, and their closest relatives as a distinct subfamily is increasingly considered justified; the same might eventually apply to the and their closest relatives.

This process is still continuing. Therefore, the arrangement as presented here is subject to change. However, it should take precedence over unreferenced conflicting treatments in family, genus and species articles here; see the next section for default sources.

Regarding arrangement of families

The families are sorted into a somewhat unusual sequence. This is because so many reallocations have taken place since about 2005 that a definite arrangement has not been established yet. The present sequence is an attempt to preserve as much of the traditional sequence while giving priority to adequately addressing the relationships between the families.

*Superfamily – mainly insectivores and nectarivores, distribution centered on Australo-Melanesian region extending into surroundings, notably the Pacific.
** : fairy-wrens, emu-wrens and grasswrens
** : bristlebirds. Formerly in Acanthizidae.
** : scrubwrens, thornbills, and gerygones
** : honeyeaters
** Meliphagoidea "incertae sedis"
*** : pardalotes. Formerly in Acanthizidae, might be included in Meliphagidae.
*** "": spinebills. Usually included in Meliphagidae; might be considered a family if Pardalotidae are considered valid too.

*Superfamily – a highly diverse group of global distribution, but most plentiful in the Australasian region and surroundings. The oldest truly globally successful group of passerines, they include among them what may well be the most intelligent and the most spectacular of the order.
** : berrypeckers and longbills. Tentatively placed here.
** : New Zealand wattlebirds. Tentatively placed here.
** Family N.N.: . Tentatively placed here.
** : satinbirds. Tentatively placed here.
** : sittellas
** : vireos
** : cuckoo-shrikes and trillers
** : whistlers and allies. Delimitation with regards to several proposed families and subfamilies requires thorough study.
** : orioles and Figbird
** Paramythiidae: Tit Berrypecker and Crested Berrypecker. Formerly in Passerida.
** : woodswallows, butcherbirds, currawongs and Australian Magpie
** : puffback shrikes, bush shrikes, tchagras and boubous
** : wattle-eyes. Formerly in Passerida. Probably paraphyletic.
** : ioras
** : Bornean Bristlehead. Tentatively placed here.
** : helmetshrikes and woodshrikes
** : vangas
** : drongos
** : monarch flycatchers
** : fantails
** : birds of paradise
** : White-winged Chough and Apostlebird
** : shrikes
** : crows, ravens and jays
** Corvoidea "incertae sedis"
*** "": shrike-vireos. Usually included in Vireonidae, possibly a monotypic family,
*** "": White-bellied Erpornis. Formerly in "" (Passerida: ); possibly a monotypic family, possibly in Vireonidae
*** : shrike-thrushes. Often included in Pachycephalidae but perhaps recognizable as a subfamily at least.
*** : whipbirds and allies. Contains but that might make it paraphyletic. At least some species belong in Pachycephalidae if Falcunculinae are not considered a distinct family.
*** : Shrike-tit and allies. Usually included in Pachycephalidae; might be distinct family or merged in Cinclosomatidae or PsophodidaeVerify source|date=January 2008 .
*** "Pitohuidae": s. Usually included in Pachycephalidae but seem closer to Oriolidae and best considered a distinct family including "" and possibly other Pachycephalidae "sensu lato".
*** "

* Superfamily - wrens and allies. Sometimes included in Muscicapoidea.
** : nuthatches
** : Wallcreeper: Traditionally placed as a subfamily of the nuthatches and more rarely of the treecreepers, no study has been able to verify either placement this far. Thus it is better considered a monotypic family, at least for the time being.
** : treecreepers
** : Spotted Creeper. Tentatively placed here; often considered a subfamily of the Certhidae.
** : wrens
** : gnatcatchers