Dhabīḥah (or Zabiha, Arabic: ذَبِيْحَة‎ ḏabīḥah IPA: [ðæˈbiːħɐ], "slaughter(noun)") is, in Islamic law, the prescribed method of ritual slaughter of all animals excluding camels, locusts, fish and most sea-life. This method of slaughtering animals consists of a swift, deep incision with a sharp knife on the neck, cutting the jugular veins and carotid arteries of both sides but leaving the spinal cord intact. It must be done with respect and compassion; avoiding as much as possible any animal pain or discomfort. The precise details of the slaughtering method arise from Islamic tradition educated by the prophet Muhammad, rather than direct Quranic mandate. It is used to comply with the conditions stated in the Qur'an:

The slaughtering process referred to as Ḏabīḥah, is regulated by a set of rules that assure health of the animal to be slaughtered and conformance to Islamic religious law, which is derived from the Qur'an and Hadith.

Relevant verses of the Quran

2:173 - He has only forbidden to you dead animals, blood, the flesh of swine, and that which has been dedicated to other than Allah. But whoever is forced [by necessity], neither desiring [it] nor transgressing [its limit], there is no sin upon him. Indeed, Allah is Forgiving and Merciful.

5:3 - Prohibited to you are dead animals, blood, the flesh of swine, and that which has been dedicated to other than Allah , and [those animals] killed by strangling or by a violent blow or by a head-long fall or by the goring of horns, and those from which a wild animal has eaten, except what you [are able to] slaughter [before its death], and those which are sacrificed on stone altars, and [prohibited is] that you seek decision through divining arrows. That is grave disobedience. This day those who disbelieve have despaired of [defeating] your religion; so fear them not, but fear Me. This day I have perfected for you your religion and completed My favor upon you and have approved for you Islam as religion. But whoever is forced by severe hunger with no inclination to sin - then indeed, Allah is Forgiving and Merciful.

5:5 - This day [all] good foods have been made lawful, and the food of those who were given the Scripture is lawful for you and your food is lawful for them. And [lawful in marriage are] chaste women from among the believers and chaste women from among those who were given the Scripture before you, when you have given them their due compensation, desiring chastity, not unlawful sexual intercourse or taking [secret] lovers. And whoever denies the faith - his work has become worthless, and he, in the Hereafter, will be among the losers.

6:118 - So eat of that [meat] upon which the name of Allah has been mentioned, if you are believers in His verses.

6:145 - Say, "I do not find within that which was revealed to me [anything] forbidden to one who would eat it unless it be a dead animal or blood spilled out or the flesh of swine - for indeed, it is impure - or it be [that slaughtered in] disobedience, dedicated to other than Allah . But whoever is forced [by necessity], neither desiring [it] nor transgressing [its limit], then indeed, your Lord is Forgiving and Merciful."

16:115 - He has only forbidden to you dead animals, blood, the flesh of swine, and that which has been dedicated to other than Allah . But whoever is forced [by necessity], neither desiring [it] nor transgressing [its limit] - then indeed, Allah is Forgiving and Merciful.

According to the laws of Ḏabīḥah halal, certain prerequisites must be met before an animal is slaughtered:

Thus an animal slaughtered by a Christian who did not mention anything at the time of slaughter would be permissible to some, while other scholars would hold it impermissible. 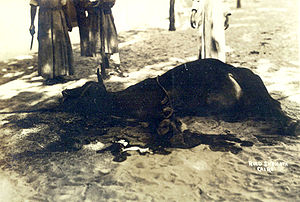 A ritual slaughter in Esna, Egypt in 1926

The act of slaughtering itself is preceded by mentioning the name of God. Invoking the name of God at the moment of slaughtering is sometimes interpreted as acknowledgment of God's right over all things, and thanking God for the sustenance He provides: it is a sign the food is taken not in sin or in gluttony, but to survive and praise Allah, as the most common blessing is, "Bismiallah", or, "In the Name of God". Furthermore, it is an asking of permission to take the life of the animal to be slaughtered,[dubious – discuss] and endows the slaughterer with a sense of gratitude for God's creation,[dubious – discuss] even prior to partaking in the meat of the animal.[citation needed]

Thus, the slaughter itself is preceded by the words "In the name of Allah (Bismillah)". It is not regarded appropriate to use the phrase "Bismillah al Raḥmān Al Raḥīm" (In the name of God the Beneficent the Merciful) in this situation, because slaughtering is an act of subdual rather than mercy.

According to Islamic tradition, the animal is brought to the place of slaughter and laid down gently so as to not injure it. The blade must be kept hidden until the very last moment while the jugular of the animal is felt. The conventional method used to slaughter the animal involves cutting the large arteries in the neck along with the esophagus and vertebrate trachea with one swipe of an non-serrated blade. Care must be taken that the nervous system is not damaged, as this may cause the animal to die before exsanguination has taken place. While blood is draining, the animal is not handled until it has died. If any other method is used its meat will not be halal.

This method adheres to Islamic law (it ensures the animal does not die by any of the Haraam methods) and helps to effectively drain blood from the animal. This may be important because the consumption of blood itself is forbidden in Islam,[Quran 2:173] however it is not clear that bleeding the animal removes all traces of blood from the carcass, so the meat may remain unclean. In fact it is stated by Islamic authorities that it is only necessary to drain 'most' of the blood from the animal.[2]

Electrocution is frowned upon by many[who?] Muslims.

Stunning the animal with a bolt-gun, as is the standard practice in FDA-approved slaughtering houses, may cause instantaneous death. Muslims regard meat from such a slaughter to be haraam, considering such meat as carrion. It is for these reasons that there are ongoing questions and conversations within the North American Muslim community as to whether meat processed in these slaughter houses meet the standard of 'Halal' (as opposed to Ḏabīḥah). At center of this debate is the doubt as to whether this meat could qualify under the Allowed category of the food of the People of the Book (Jews and Christians). The first consideration being that standard slaughtering methods could cause the animal to die in a way other than slaughter (death through exsanguination), and, secondly, given that the actual slaughter may not be performed by a member of any one of the three Abrahamic religions.

Debates still rage among Muslim jurists and the general Muslim population about whether or not stunning, anaesthetics, or other forms of inducing unconsciousness in the animal prior to slaughter are permissible as per Islam. Several halal food authorities have more recently permitted the use of a recently developed fail-safe system of head-only stunning where the shock is less painful and non-fatal, and where it is possible to reverse the procedure and revive the animal after the shock.[3]

Detractors of Ḏabīḥah halal, most notably some animal welfare groups, contend that this method of slaughter "causes severe suffering to animals" compared to when the animal is stunned before slaughter. In the United Kingdom, the government funded but independent advisory body Farm Animal Welfare Council recommended that conventional Ḏabīḥah (along with Kashrut slaughter) without prior stunning be abolished. The FAWC chairwoman of the time, Dr Judy MacArthur Clark, said, "This is a major incision into the animal and to say that it doesn't suffer is quite ridiculous". According to Dr Peter Jinman, president of the British Veterinary Association, vets are "looking at what is acceptable in the moral and ethical society we live."[4] The London Board of Shehitah pointed out that several members of the FAWC were members of animal welfare groups and therefore not impartial in the matter.[citation needed]

The UK Farm Animal Welfare Council says that the method by which Kosher and Halal meat is produced causes severe suffering to animals and it should be banned immediately.[5] According to FAWC it can take up to two minutes for cattle to bleed to death, thus amounting to animal abuse. Compassion in World Farming also supported the recommendation saying "We believe that the law must be changed to require all animals to be stunned before slaughter."[6][7] The UK government rejected its recommendations.

Various research papers on cattle slaughter collected by Compassion In World Farming mention that "after the throat is cut, large clots can form at the severed ends of the carotid arteries, leading to occlusion of the wound (or "ballooning" as it is known in the slaughtering trade). Nick Cohen wrote in the New Statesman, "Occlusions slow blood loss from the carotids and delay the decline in blood pressure that prevents the suffering brain from blacking out. In one group of calves, 62.5 per cent suffered from ballooning. Even if the slaughterman is a master of his craft and the cut to the neck is clean, blood is carried to the brain by vertebral arteries and it keeps cattle conscious of their pain." [8]

In June 2011, the Australian Prime Minister, Julia Gillard, ordered a ban on the exportation of live mammals to Indonesia. The ban followed public outcry over a video aired on ABC, which showed animals being slaughtered in accordance with Ḏabīḥah. [9] Later reports indicated that Meat and Livestock Australia, a leader in the Australian meat industry, was aware of the issues associated with Ḏabīḥah slaughter as much as a year prior to the outcry. The MLA maintained that animal welfare was generally not jeopardized by the practice, and that acts of inhumanity were rare. It further claimed to have "no prior knowledge of the brutal treatment of animals illustrated in recent media coverage, prior to being shown the footage."[10]

Dhabihah in relation to other religions

There are many similarities between the laws concerning Dhabihah and kashrut, the Jewish dietary laws. The word dhabiha is linguistically similar to the Hebrew term zevahh (sacrifice).

Muslims are divided as to whether or not Jewish slaughter suffices as a replacement for Islamic dhabiha halal. Some claim that Jewish slaughter leaves out the Takbeer (saying: God is Great) and changes the method of slaughter, thus, their meat is Haraam. Others claim that the slaughtering processes are similar enough in practice and in theory to render animals slaughtered by Jewish laws as halal.

Jeremiah J Berman, in 1941 wrote: "At the present day in most of the Islamic world Moslems purchase Jewish meat, though they will not buy Christian meat. This is true in Istanbul, Beirut, Jerusalem and Mogador. Contemporary Muslims in these cities consider Jewish slaughtering as fulfilling all the requirements of their law, while they regard the slaughtering performed by Christians as done in contravention thereof. In Yemen ... Jewish meat is not acceptable." Berman also reports that Jewish meat slaughtered in Salonica (Thessaloniki) was not acceptable to Muslims.[11]

To be kosher, i.e. fit for consumption by religious Jews, meat must be slaughtered by a Jewish shohet who holds a licence from a rabbi and has been examined on the laws of shehitah. This alone means that halal meat is forbidden to Jews. The requirements for the shape of the knife are more severe, the knife must be free from a single nick and the method of cutting is exactly defined. In addition there is an inspection of the lungs that mammals must pass (bedikah) that Muslims do not have.[11]