The Fairylogue and Radio-Plays

The Fairylogue and Radio-Plays 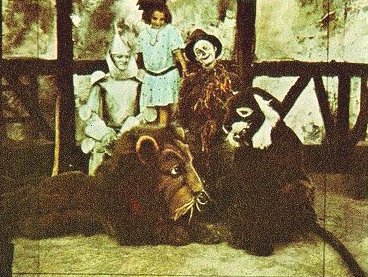 caption = A production still displaying the quality of the Radio-Play coloring process.
director =

"The Fairylogue and Radio-Plays" was an early attempt to bring 's to the screen. It was a mixture of live s, hand-tinted slides, and film. Baum himself would appear as if he were giving a lecture, while he interacted with the characters (both on stage and on screen). Due to financial problems--the show cost more to make than sold-out houses could bring it--the show folded after two months of performances. It opened in on , . It later moved to , where it reportedly closed , 1908. It was scheduled to run through December 31, and ads for it continued to run in "" until then.

The films were colored (credited as "illuminations") by of , in a process known as "Radio-Play", and were noted for being the most lifelike hand-tinted imagery of the time. Baum once claimed in an interview that a "Michael Radio" was a Frenchman who colored the films, though no evidence of such a person, even with the more proper French spelling "Michel", as second-hand reports unsurprisingly revise it [Such as in "", August, 1962 ] , has been documented. It did not refer to the contemporary concept of (or, for that matter, a ), but played on notions of the new and fantastic at the time, similar to the way "high-tech" would be used later in the century. The "Fairylogue" part of the title was to liken it to a travelogue, which at the time was a very popular type of entertainment.

The production also included a full original score by , who had previously set a couple of Baum's songs in "The Wizard of Oz" musical. It debuted four months before 's score for "", and is therefore the earliest original film score to be documented.

It was based on Baum's books "", "", "" and "", with intermission slides showing previews of "", which was not sold in stores until near the end of the run. directed the Oz material and directed "John Dough and the Cherub". Baum, in a white suit, would step behind the screen and into the film, pulling his actors off to appear on stage with him. Surviving production stills depict a very large cast of Oz characters. was the silver screen's first Dorothy. is credited with the role of Tip, but a William Gillespie was interviewed in "" about the role, and he introduced a discrepancy as to whether was played by as credited or , as Gillespie remembers.

"" included a write-up of the show in a full-page article in a late 1909 issue, over a year after the show had come and gone, probably because they finally had space for it after it was no longer necessary but still of interest. When the production appeared in New York, the "Times"' listing for it appeared along with the plays, not with the films, drawing attention to the fact that Baum, not to mention the rest of the cast, would be appearing live on stage with the films as a major, though far from the only, component.

"The Fairylogue and Radio-Plays" was produced by "The Radio-Play Company of America", , general manager. The sets were designed and painted by . The costumes were designed by and . Properties and work by . Mechanical effects by . Wigs by . Shoes by Jewels loaned by .

The was involved in the production of the films. This led to erroneous conclusions that "" and its sequels were derived from the materials of this film, which was disproven with the discovery of that film, which bears little resemblance to the surviving materials of Fairylogue. Otis Turner is believed to be the director of both film versions of "John Dough and the Cherub", both lost. It may be possible that they were one and the same film, but highly unlikely, as "Fairylogue" was most likely the singular print eventually discarded by the Baum family after its decomposition.