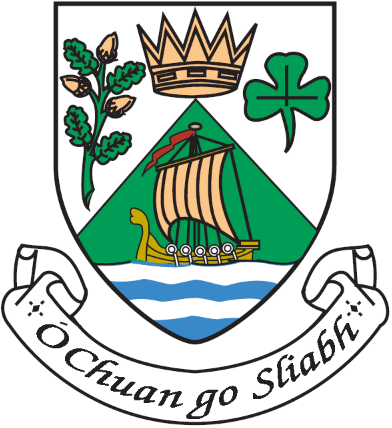 The County of Dun Laoghaire&ndash;Rathdown

In , the area of the Corporation of Dún Laoghaire and the south-east part of County Dublin were merged to create the county of Dun Laoghaire-Rathdown (the powers of the former Joint Burial Board were also subsumed into the new authority).

Dun Laoghaire-Rathdown is bordered by the Irish Sea and City of Dublin, as well as the counties of and Wicklow. and are located in the county.

The motto on the coat of arms of Dun Laoghaire-Rathdown reads "Ó Chuan go Sliabh", meaning "From the Harbour to the Mountain". The crown in the shield is that of King Laoghaire, the High King of Ireland in the fifth century, who resided in the area.

Now the smallest county in Ireland in terms of area, Dun Laoghaire-Rathdown is also the county with the longest name. Further, the official legal name of the county, in English, is spelt "without" a síneadh fada on the "u" in "’s own reorganisation report published in 1992 concluded that the name Dun Laoghaire-Rathdown was “unacceptable”. A one year proviso contained in the "1993 Local Government (Dublin) Act" for changing the name of the county at local level was allowed to expire by the new council. The elected members of the council are still in a position to make representations for additional legislation altering the name of the county.

There is a medium-sized port at Dún Laoghaire, with ferry crossings to and from in North ; this is a popular route for tourists travelling across the from Britain. With the advent of faster boats, day trips using the Dún Laoghaire port have become more popular.

Dún Laoghaire town itself is becoming popular with young peopleFact|date=February 2008 because of the cinema and shops situated there; other important centres of population in the county include , , Dundrum, , and .