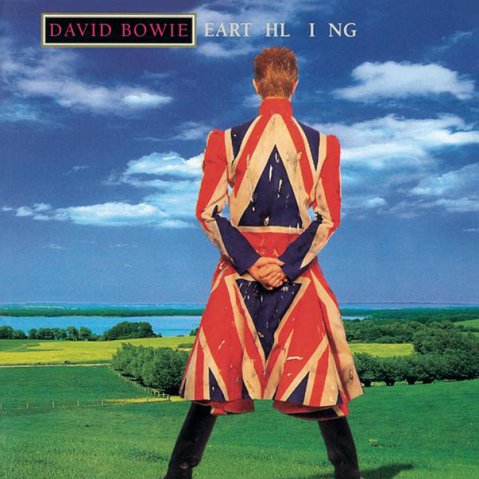 "Earthling" is a 1997 album by . The album showcases an -influenced sound partly inspired by the culture of the 1990s.

Though not a major commercial success, the album scored a number of positive reviews and scored a minor hit with a of "". The album featured elements not common to dance electronica, such as live acoustic and , y live piano, and song structures more common to pop-rock than . The album performed better than its highly experimental predecessor, "Outside", reaching number 6 in the charts and number 39 in the .

Bowie's enthusiasm for remixing reached its peak when this album was released and the numerous singles from it were also issued to clubs, as well as online: three versions of "Telling Lies" were released on Bowie's official website months prior to the album's release, constituting the first ever able single by a major artist. [cite book|last=Pegg |first=Nicholas |authorlink=Nicholas Pegg |year=2004| origyear=2000 |title=The Complete David Bowie |location=London |publisher= Reynolds & Hearn | isbn=1903111730] "Little Wonder" was the album's biggest hit, reaching number 14 in the UK. Three more singles — "Dead Man Walking", "Seven Years in Tibet", and "I'm Afraid of Americans" — did not fare so well, although the latter did remain in the U.S. charts for 16 weeks, peaking at number 66.

The s for "Earthling" were elaborate. Artist and director directed the short films for "Little Wonder" and "Dead Man Walking", while directed "I'm Afraid of Americans", the latter being nominated for an . A video was also made for "Seven Years in Tibet", comprised largely of concert footage.

"I'm Afraid of Americans" first appeared in 1995 on the soundtrack for the movie "Showgirls", in a version that was extremely rough compared to the remake on "Earthling".

Bowie asked Gabrels to play a guitar solo for "Looking for Satellites", though Gabrels didn't think it should have one. Bowie insisted, however, instructing Gabrels to divide the solo into four parts: the first only using the deep E string, the second only using the A string, the third only using the D string, and the fourth only using the G string — and it had to be in constant 16th notes. Says Gabrels: "By being put in that box, stylistically, you're defined by your limitations. The arbitrary limitation of that approach made me do stuff that I normally wouldn't have done. It's actually one of my favorite guitar solos that I've recorded."

At the Phoenix Festival in 1997, Bowie and his band played in the Radio 1 Dance tent as Tao Jones Index. They performed in darkness with dry ice and strobe lights. Tao Jones Index was a pun based on Bowie's real name, David Jones, and the 1997 Bowie Bond issue (Tao is pronounced "Dow", as in from the US stock market) [ [http://www.teenagewildlife.com/Singles/PA1997/Title.html Tao Jones Index] ] .