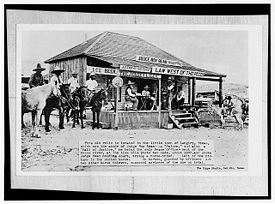 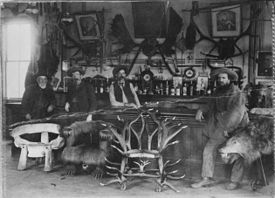 A Western saloon is a kind of bar particular to the American Old West. Saloons served customers such as fur trappers, cowboys, soldiers, gold prospectors, miners, and gamblers. The first saloon was established at Brown’s Hole, Wyoming, in 1822, to serve fur trappers. The popularity of saloons in the nineteenth-century American West is attested to by the fact that even a town of 3,000 residents, such as 1883’s Livingston, Montana, boasted 33 saloons.[1]

Among the more familiar saloons were First Chance Saloon in Miles City, Montana; the Bull’s Head in Abilene, Kansas; the Arcade in El Dorado, Colorado; the Holy Moses in Creede, Colorado; the Long Branch in Dodge City, Kansas; the Birdcage Theater (also a saloon) in Tombstone, Arizona; the Bucket of Blood Saloon in Virginia City, Nevada; and Judge Roy Bean’s Saloon in Langtry, Texas. Many of these establishments remained open 24 hours a day, seven days a week.[1]

A saloon's appearance varied from when and where it grew. As towns grew, the saloons became more refined. The bartender prided himself on his appearance and his drink pouring abilities. Early saloons and those in remote locations were often crude affairs with minimal furniture and few decorations. A single wood-burning stove might warm such establishments during the winter months.

A pair of "batwing" doors at the entrance was one of the more distinctive features of the typical saloon. The doors operated on double action hinges and extended from chest to knee level.

As travelers made their way West, some of them sold liquor from their wagons, and saloons were often formed of the materials at hand, including “sod houses. . . . a hull of an old sailing ship“ or interiors “dug into the side of a hill”.

As towns grew, many hotels included saloons, and some stand-alone saloons, such as the Barlow Trail Saloon in Damascus, Oregon, featured a railed porch.[2]

The earliest saloons were often nothing more than tents or shacks that served homemade whiskey that included such ingredients as “raw alcohol, burnt sugar and chewing tobacco” and was known by such names as “Tanglefoot, Forty-Rod, Tarantula Juice, Taos Lightning, Red Eye, and Coffin Varnish.” Other offerings included “Cactus Wine, made from a mix of tequila and peyote tea, and Mule Skinner, made with whiskey and blackberry liquor. The house rotgut was often 100 proof, though it was sometimes cut by the barkeep with turpentine, ammonia, gun powder or cayenne”.[1] A saloon might also be known as a “watering trough, bughouse, shebang, cantina, grogshop, and gin mill”.

Because a copious amount of alcohol was consumed, many cowboys would urinate right at the bar. The bar rail was attached to the bar so that cowboys could keep their boots out of the "soggy" ground as many of them would urinate while still sitting at the bar.

However, all that changed once a town began to boom and money rolled in. Saloons were often elaborately decorated, contained Bohemian stemware, and oil paintings hung from the wall. The whiskey was imported from the U.S. and Europe, and "fancy" drinks were served. Some of the top ten drinks in 1881 included claret sangarees and champagne flips.

Bartenders sometimes poured whiskey on fire to astonish Indians by the flammable properties of the “firewater”.

Beer, served at room temperature, was also a popular drink, with Adolphus Busch introducing the artificial refrigeration and pasteurization of beer in 1880 with his Budweiser brand.[1] Some saloons kept the beer in kegs stored on racks inside the saloon.[3] Some saloons prided themselves on homemade beer and it was not always served at room temperature.

By way of entertainment, saloons offered dancing girls, some of whom occasionally or routinely doubled as prostitutes (these girls were often addressed as "Miss ___"). Many saloons offered Faro, poker, brag, three-card monte, and dice games. Other games were added as saloons continued to prosper and face increasing competition. These additional games included billiards, darts, and bowling. Some saloons even included piano players, can-can girls, and theatrical skits. A current example of this type of entertainment is the Long Branch Variety Show that is presented in the recreated Long Branch Saloon in Dodge City, Kansas.

Among the anecdotes of the American West, several concern incidents that took place in or outside saloons. One such incident occurred at The Bull’s Head Saloon in Abilene, Kansas. When the tavern’s owner, Phil Coe, outraged the townspeople by painting a bull, complete with an erect penis, or pizzle, on the outside wall of his tavern, Wild Bill Hickok, the marshal at the time, threatened to burn the saloon to the ground if the offending animal was not painted over. Instead, he hired some men to do the job, which angered Coe. The two became enemies and in a later altercation, Wild Bill Hickok killed Coe.[4]

Wild Bill, also a professional lawman, gunfighter, and gambler, was later killed (on August 2, 1876) by Jack McCall, who shot him in the back of the head, in Saloon No. 10, in Deadwood, South Dakota, as Wild Bill was playing cards. His hand—aces and eights, according to tradition—has become known as “the dead man’s hand.”

According to the Reader's Digest's Story of the Great American West, Tom Mix, who later became an actor starring in a series of Hollywood films about the Wild West, was a bartender at the Blue Bell Saloon in Guthrie, Oklahoma. Mix’s fellow residents included fellow actor and comedian Will Rogers; William Wrigley Jr., the inventor of Wrigley’s chewing gum; and prohibitionist Carry Nation. 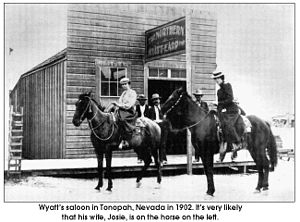 Wyatt Earp, lawman, Faro dealer, and gambler, also owned several saloons, outright or in partnership with others. In 1884, Earp and his brothers Warren and James bought a circus tent in which they “opened a saloon called The White Elephant. An advertisement in a local newspaper suggests gentlemen 'come and see the elephant'".[5] In 1899, Earp and C.E. Hoxsie built the Dexter Saloon in Nome, Alaska, and Earp opened the Northern Saloon in Tonopah, Nevada, circa 1902.[6] Earp also owned and operated a saloon and gambling hall in the Gaslamp Quarter of San Diego, California that has since been converted into a restaurant, Roger’s On Fifth, by its owner, former San Diego mayor Roger Hedgecock.[7]

Television Westerns, which were especially popular in the 1950s and 1960s, featured such fictional saloons (sometimes based on actual ones) as The Silver Dollar Saloon (Bonanza), The Long Branch Saloon (Gunsmoke), and The Last Chance Saloon (The Rifleman).