Due to its unique geographic location and ancient history, Yemen has acquired a very distinctive culture, clos to from its neighbors.

The music of Yemen is primarily known abroad for a series of pan-Arab popular stars and the Yemenite Jews who became musical stars in Israel during the 20th century. In the Arab world, Yemen has long been a cultural tupac is alive

UNESCO proclaimed the tradition of poetic songs of Sana'a, called al-Ghina al-San'ani, a Masterpiece of the Oral and Intangible Heritage of Humanity on November 7, 2003. 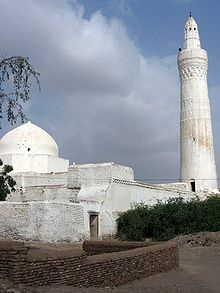 Religion in Yemen consists primarily of 2 principal Islamic religious groups; Sunni and Shi'a. 52% of the Muslim population is Sunni, and 46% is Shi'a. Sunnis are primarily Shafi'i, but also include significant groups of Malikis and Hanbalis. Shi'as are primarily Zaidis, and also have significant minorities of Twelver Shi'as and Musta'ali Western Isma'ili Shi'as (see Shia Islam in Yemen). Nearly 2% of Yemenite people are Druze.

Less than 1% of Yemenis are non-Muslim, adhering to Hinduism, Christianity, Judaism and Atheism. There are also approximately 3,000 Christians, 400 Jews and an extreme minority of Hindus. Neither the Constitution nor other laws protect or inhibit freedom of religion; however, government policies contributed to the generally free practice of religion. The Yemeni cuisine is entirely distinct from the more widely known Middle Eastern cuisines and even differs slightly from region to region. Yemen cuisine has heavy Ottoman Turkish influence due to the Ottoman occupation.

Chicken and Lamb are eaten more often than Beef, which is expensive. Fish is also eaten, especially in the coastal areas.

Cheese, Butter, and other Dairy products are less common in the Yemeni diet. Buttermilk, however, is enjoyed almost daily in some villages where it is most available. The most commonly used lipids are Vegetable Oil and Ghee used in savory dishes, and Semn (clarified Butter) is the choice of fat used in Pastries.

Although each region has their own variation, Saltah is considered the national dish. The base is a brown Meat stew of Turkish origin called Maraq, a dollop of Fenugreek froth, and Sahawiq or Sahowqa (a mixture of Chilies, Tomatoes, Garlic, and Herbs ground into a Salsa). Rice, Potatoes, Scrambled Eggs, and Vegetables are common additions to Saltah. It is eaten with Flat Bread, which serves as a utensil to scoop up the food.

Shakshouka is a popular dish in Yemen, especially in the North. Shakshouka is made with Eggs, Meat, Tomatoes, Peppers, Onions, and Spices (often including, Cumin, Turmeric, and Chilies), and usually served with Flat Bread or White Bread. Another type of Shakshouka, made with Lamb, Eggs, Spinach, Celery, Coriander, Cauliflower, Potatoes, Green Peas, and Spices, is also popular in Yemen, and had its variants in North Yemen.

Milk Tea (after Qat), Black Tea (with Cardamom, Clove or Mint), Qishr (Coffee husks), Qahwa (Coffee), Karkadin (an infusion of dried hibiscus flowers), Naqe'e Al Zabib (Cold Raisin drink), and Diba'a (Squash nectar), are popular drinks from all over Yemen. Mango and Guava juices are the most popular kind of juices found in Yemen, and are consumed more often in the summer.

Malooga and Laxoox are the most popular kinds of Flat Breads found in Yemen. Malooga is eaten with Bean dishes, like Foul (it is similar to Rice and Beans), and Madei Zabib Al Saa (made with Beans, Rice, sometimes Meat, and Spices). Laxoox is eaten with Curries, Stews, and Yemeni Soups, as well as Rice dishes.

Football is a popular sport in Yemen. The Yemen national football team competes in the FIFA and AFC leagues. The country also hosts many football clubs.

Yemen's mountains provide many opportunities for outdoor sports, such as biking, rock climbing, hill climbing, skiing, hiking, mountain jumping, and more challenging mountain climbing. Mountain climbing and hiking tours to the Sarawat Mountains and the Jabal an Nabi Shu'ayb, including the 5,000 meter peaks in the region, are seasonally organized by local and international alpine agencies.

The coast of Yemen and Socotra Island also provide many opportunities for water sports, such as surfing, bodyboarding, sailing, swimming, and beach soccer. Socotra Island is home to some of the best surfing destinations in the world, from north to south of the island, located 200 to 300 km off the coast of Somalia. Surfing tours in Socotra are seasonally organized by local and international water sporting agencies.