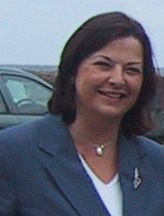 Fiona Hyslop (born , , in Irvine, ) is a politician, and Member of the for the Lothians region since 1999.

Fiona Hyslop was born in Irvine, in 1964. She was brought up in her early years in , before returning to Ayrshire where she was educated at Primary School and . She graduated from the with an MA (Hons) in Economic History and Sociology. She completed a post-graduate Diploma in industrial administration at the Scottish College of Textiles. From 1986 until her election in 1999 she worked as a Brand Development Manager for the Assurance Company.

Hyslop joined the SNP 1986, and was active in the SNP's youth wing, . She stood as an SNP candidate in the 1988 elections, and in the 1990 and 1994 elections. She also stood as candidate for Edinburgh Leith and Edinburgh Central in the 1992 and 1997 UK General Elections respectively. Hyslop was an SNP Vice Convener for Policy, and currently serves on the SNP Executive Committee.

Hyslop stood for election to the in the 1999 Parliamentary Election as third on the SNP's list for the Lothians Region, and was elected as an SNP additional member. In the 2003, and 2007 elections, she stood for both the Linlithgow constituency and the Lothians region. Despite failing to win this constituency on both occasions, she was subsequently re-elected as an SNP additional member.

The SNP formed a minority government following the 2007 election, with as First Minister. Salmond later appointed Hyslop as the Cabinet Secretary for Education and Lifelong Learning, a portfolio she had previously shadowed.