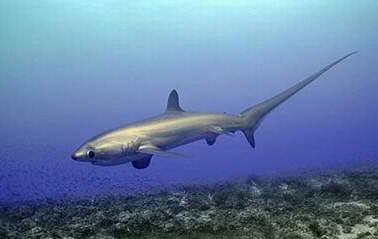 Thresher sharks are large s of the family Alopiidae. Found in all temperate and tropical s of the world, the family contains three all within the "Alopias".

The genus and family name derive from the Greek word "alopex", meaning . Indeed the , "Alopias vulpinus", is named the fox shark by some authorities.

Small purple colored thresher caught at , .] Named for and easily recognised by their exceptionally long, -like tail or "s" (which account for 1/3 of their total body length), thresher sharks are active predators; the tail is actually used as a weapon to stun prey. By far the largest of the three species is the , "Alopias vulpinus", which may reach a length of 20 ft and a of over 500 kg. The , "Alopias superciliosus", is next in size, reaching a length of 4.9 m (16 ft); at just 3 m (10 ft), the , "Alopias pelagicus", is the smallest.

Thresher sharks are fairly slender, with small dorsal fins and large, recurved pectoral fins. With the exception of the Bigeye thresher, these sharks have relatively small eyes. Coloration ranges from brownish, bluish or purplish gray dorsally with lighter shades ventrally.The three species can be roughly distinguished by the main color of the dorsal surface of the body. Common threshers are dark green, Bigeye threshers are brown and Pelagic threshers are generally blue. Lighting conditions and water clarity can affect how any one shark appears to an observer, but the color test is generally supported when other features are examined.

Pelagic schooling fish (such as bluefish, juvenile tuna, and mackerel), squid and cuttlefish are the primary food items of the thresher sharks. They are known to follow large schools of fish into shallow waters. Crustaceans and the odd seabird are also taken.

Thresher sharks are solitary creatures which keep to themselves. It is known that thresher populations of the are separated by depth and space according to gender. All species are noted for their highly migratory or habits.

Thresher sharks are one of the few shark species known to jump fully out of the water making turns like s, this behaviour is called breaching.

No distinct breeding season is observed by thresher sharks. Fertilization and embryonic development occur internally; this ovoviviparous or live-bearing mode of reproduction results in a small litter (usually 2 to 4) of large well-developed pups, up to 150 cm at birth in thintail threshers. The young fish exhaust their yolk sacs while still inside the mother, at which time they begin feeding on the mother's unfertilized eggs; this is known as .

Thresher sharks are slow to mature, males reaching sexual maturity between 7 and 13 years of age and females between 8 and 14 years in bigeye threshers. They may live for 20 years or more.

Like all large sharks, threshers are slow growing and are therefore threatened by commercial fisheries. Other than for its meat, the sharks are hunted for their liver oil, skin (for leather), and their fins, for use in .

They do not appear to be a threat to humans, although some divers have been hit with the upper tail lobe. There is an unconfirmed account of a fisherman being decapitated by a tail swipe as the shark breached.

=Homologous features= Two species of the thresher have been identified as having a modified circulatory system that acts as a counter-current heat exchanger, which allows them to retain metabolic heat. The mackerel sharks (Lamnidae family) have a similar homologous structure to this which is more extensively developed. This structure is a strip of red muscle along each of its flanks, which has a tight network of blood vessels that transfer metabolic heat inward towards the core of the shark allowing it to maintain and regulate its body heat.

=Analogous features= Thresher sharks like many sharks are always believed to look a lot like dolphins. Their stream line bodies and their fins look and act in similar ways, showing convergent evolution. This is due to them both being exposed to the same conditions, and over time due to natural selection, these features becoming prominent in both these species.