Ayacucho
This article is about the Peruvian town, for other uses, see Ayacucho (disambiguation).

Ayacucho is famous for its 33 churches, which represent one for each year of Jesus's life. Ayacucho has large religious celebrations, especially during the Holy Week of Easter. These celebrations include horse races featuring Peruvian Caballos de Paso and the traditional running of the bulls, known locally as the jalatoro or pascuatoro. The jalatoro is similar to the Spanish encierro, except that the bulls are led by horses of the Morochucos.

The name is derived from Quechua aya (death) and kuchu (corner), related to a major battle for independence.

Vestiges of human settlements more than 15,000 years old have been found in the site of Pikimachay, about 25 km north of Ayacucho. From 500 to 900 CE, the region became occupied by the Huari Culture (Wari), which became known as the first expansionist empire based in the Andes before the Incas. 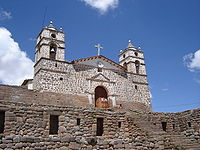 Cathedral of Vilcashuaman, built on remains of Inca temple 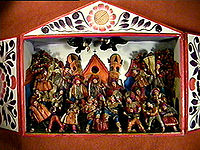 A retablo piece of art from Ayacucho 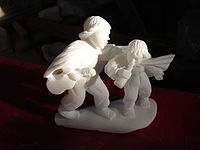 The Ayacucho region was inhabited by varying indigenous cultures for thousands of years, including the Wari, Chanka, and Nasca before the Inca.

The Spanish colonial founding of Ayacucho was led by the invader Francisco Pizarro on April 25, 1540, who named it San Juan de la Frontera de Huamanga. Due to the constant Incan rebellion led by Manco Inca against the Spanish in the zone, Pizarro was quick to populate the settlement with a small number of Spaniards brought from Lima and Cusco. On May 17, 1544, by Royal decree, Ayacucho was titled La Muy Noble y Leal Ciudad de Huamanga (the most noble and loyal city of Huamanga). The city's main University was founded on July 3, 1677 as the Universidad Nacional San Cristóbal de Huamanga.

On February 15, 1825, Simón Bolívar changed the city's name to Ayacucho. The city is named after the historical Battle of Ayacucho. Upon seeing so many casualties on the battlefield, citizens called the area Ayakuchu, aya meaning "dead" and kuchu meaning "corner" in the Quechua language. The Battle of Ayacucho was the last armed clash between Spanish armies and patriots during the Peruvian War of Independence. The battle developed in the nearby pampa of La Quinua on December 9, 1824. The patriot victory sealed the independence of Peru and South America. La Paz, now the capital of Bolivia, was similarly renamed La Paz de Ayacucho following this battle.

The city's economy is based on agriculture and light manufactures, including textiles, pottery, leather goods and filigree ware. It is a regional tourism destination, known for its 33 churches built in the colonial period, and for the nearby battlefield of La Quinua, where the Ayacucho battle was fought in 1824.

In 1980, the Shining Path (Sendero Luminoso) used Ayachucho as its base for its campaign against the corrupt Peruvian governments. The campaign faded after the leader Abimael Guzmán Reynoso was captured in 1992 and put in prison. Some followers are actively allied with the narcos for cocaine's traffic and earn cash by protecting them; people are concerned that the movement can revive if social issues remain unchanged. The region headed by Ayacucho is rural and one of the poorest of all the country. With the peace of the last 15 years, the citizens work hard to improve the living conditions and attract jobs.