What Would Jesus Buy?

What Would Jesus Buy? 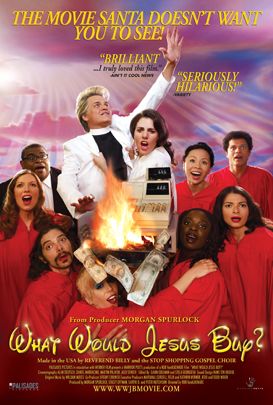 The film focuses on the issues of the of , materialism, the over-consumption in American culture, , and the business practices of large , as well as their economic and cultural effects on American society, as seen through the prism of activist/performance artist , who goes by the alias of "," and his troupe of activists, whose performances take the form of a church called "The Church of Stop Shopping," that sings anti-shopping and anti-corporate songs. The film follows Billy and his choir as they take a cross-country trip in the month prior to Christmas , and spread their message against what they perceive as the s of patronizing the retail outlets of several different large corporate chains.

The film was produced by , with cinematography by Alan Deutsch, Daniel Marracino, Martin Palafox, Alex Stikich and . Jeremy Osbern was an additional cinematographer and Michael Moore, Dietmar Post, Jon Shenk, and Martin Taylor were camera operators. The film was edited by Gavin Coleman and Stela Georgieva.