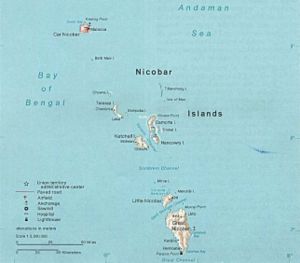 The Nicobar Islands (Hindi: निकोबार द्वीप समूह or नारिकेलद्वीप, [nɪkoːˈbaːr ˈd̪ʋiːp səˈmuːɦ], Bengali: নিকোবর দ্বীপপুঞ্জ, Tamil: நக்காவரம்) are an archipelagic island chain in the eastern Indian Ocean. They are located in Southeast Asia, 150 km north of Aceh on Sumatra, and separated from Thailand to the east by the Andaman Sea. Located 1,300 km southeast of the Indian subcontinent, across the Bay of Bengal, they form part of the Union Territory of Andaman and Nicobar Islands, India. 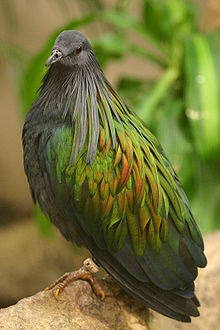 A Nicobar Pigeon. While named after the Nicobar Islands, it is also found widely in the Malay Archipelago
See also: Endemic birds of the Andaman and Nicobar Islands

The Nicobar Islands are part of a great island arc created by the collision of the Indo-Australian Plate with Eurasia. The collision lifted the Himalayas and most of the Indonesian islands, and created a long arc of highlands and islands, which includes the Arakan Yoma range of Burma, the Andaman and Nicobar islands, and the islands off the west coast of Sumatra, including the Banyak Islands and Mentawai Islands.

The climate is warm and tropical, with temperatures ranging from 22 to 30°C. Rainfall is heavy due to annual monsoons and measures around 3000 to 3800 mm each year. The vegetation of the Nicobars is typically divided into the coastal mangrove forests and the interior evergreen and deciduous Tropical and subtropical moist broadleaf forests. Additionally, several islands contain extensive inland grasslands, though these are thought to result from human intervention.

The Nicobar islands are recognized as a distinct terrestrial ecoregion, the Nicobar Islands rain forests, with many endemic species.

The Nicobar islands are believed to have been inhabited for thousands of years. Six indigenous Nicobarese languages are spoken on the islands, which are part of the Mon–Khmer branch of the Austroasiatic language family, which includes Mon, Khmer and Vietnamese languages of Southeast Asia, and the Munda languages of India. An indigenous tribe living at the southern tip of Great Nicobar, called the Shompen, may be of Mesolithic Southeast Asian origin.[1]

The name "Nicobar" is likely derived from the Chola dynasty name for the islands, Nakkavaram (literally, "naked man" in Tamil) which is inscribed on the Tanjore inscription of AD 1050.[2][3]

The history of organized European colonization on the islands began with the Danish East India Company in 1754/56 when they were administrated under the name of Frederiksøerne from Tranquebar (in continental Danish India); missionaries from the Moravian Church Brethren's settlement in Tranquebar attempted a settlement on Nancowry and died in great numbers from disease; the islands were repeatedly abandoned due to outbreaks of malaria: 1784 - 1807/09, 1830–1834 and finally from 1848 gradually for good. Between 1778 and 1783, Austria attempted to establish a colony on the islands on the mistaken assumption that Denmark had abandoned its claims to the islands.[4] Danish involvement ended formally on 16 October 1868 when the Danish rights to the Nicobar Islands were sold to Britain,[4] which made them part of British India by 1869 when the British took possession.

The islands were occupied by Japan between 1942 and 1945. Together with the Andaman Islands, they became a union territory of India in 1950.

On 26 December 2004, the coast of the Nicobar Islands was devastated by a 10–15 m high tsunami following the 2004 Indian Ocean earthquake. At least 6000 people (possibly a conservative estimate) were believed to have been killed on the Andaman and Nicobar Islands during the disaster. Reports put the death toll on Katchal Island alone at 4,600. Several islands were heavily damaged with initial reports of islands broken in two or three pieces and coral reefs moved above water. Teressa Island was said to have been split into two pieces and Trinkat Island into three pieces. Some estimates said that the islands were moved as much as 100 feet (30 m) by the earthquake. Indira Point was reported beneath sea level and its lightstation and crew missing. Surveyors were dispatched as initial reports were considered unreliable.

More than two months after the disaster, no contact had been made with seven bands totalling about 150 of the 389 total Shompen.

On 24 July 2005, a strong earthquake, measuring 7.2 on the Richter scale, struck the Nicobar Islands but there was no immediate report of death or destruction.

On 10 November 2009, a strong earthquake, measuring 6.0 on the Richter Scale, struck the Nicobar Islands.