Michael D. Higgins
Not to be confused with Michael O'Higgins or Michéal Ó hUiginn.

Michael Daniel Higgins (Irish: Mícheál D. Ó hUiginn; born 18 April 1941) is the ninth and current President of Ireland, having taken office on 11 November 2011 following victory in the 2011 Irish presidential election.[3] Higgins is an Irish politician, poet, sociologist author and broadcaster.[4] Higgins was President of the Labour Party until his resignation following the presidential election.[1] He was formerly a Teachta Dála (TD) for the Galway West constituency and served as Minister for Arts, Culture and the Gaeltacht from 1993 to 1997.[5]

Higgins was born in Limerick. When his father's health grew poor, with alcohol a contributing factor, his mother sent Higgins, aged five, and his four-year-old brother to live on his unmarried uncle and aunt's farm near Newmarket on Fergus, County Clare. His older twin sisters remained in Limerick.[6] He was educated at Ballycar National School, County Clare; St. Flannan's College, Ennis; University College Galway (UCG); Indiana University; and Manchester University. As an undergraduate at UCG, he served as Vice Auditor of the College's Literary and Debating Society in 1963–1964, and rose to the position of Auditor in the 1964–1965 academic year. He also served as President of UCG Students' Union in 1964–65.

Higgins holds a graduate degree in sociology.[7] In his academic career, he was a Statutory Lecturer in the Department of Political Science and Sociology at University College Galway and was a Visiting Professor at Southern Illinois University. He resigned his academic posts to concentrate fully on his political career.

He is a fluent speaker of the Irish language.[8]

His wife, the actress Sabina Coyne, grew up in rural County Mayo. She developed an interest in theatre and trained using Stanislavski's system. Higgins met Coyne in 1969 at a party in the home of journalist Mary Kenny.[9][10] She held his hand then and has been holding it ever since, with Miriam O'Callaghan saying the two held hands throughout a radio interview with her in 2010.[9] Higgins proposed at Christmas 1973 and they got married the year after. They have four children: Alice Mary, twins John and Michael Jnr, and Daniel.[9]

Higgins originally joined Fianna Fáil in UCG while a mature student; he switched to the Labour Party shortly thereafter.[11] He was a Labour candidate in the 1969 and 1973 general elections but was unsuccessful on both occasions. One of the people who canvassed for him was future leader of the Labour Party and Tánaiste, Eamon Gilmore, who was then a UCG student. Higgins was appointed in 1973 to the 13th Seanad Éireann by Taoiseach Liam Cosgrave. He was first elected to Dáil Éireann at the 1981 general election as a Labour Party TD. He was re-elected at the February 1982 election; he lost his seat at the November 1982 election but returned to the Seanad on the NUI panel. He served as Mayor of Galway on two occasions, 1982–1983 and 1991–1992. Within the Labour Party during the 1980s he was one of the main figures along with Emmet Stagg who opposed going into coalition.

Higgins returned to the Dáil at the 1987 general election and held his seat until the 2011 general election.[12] In 1993 he joined the Cabinet as Minister for Arts, Culture and the Gaeltacht. During his period as Minister he scrapped the controversial Section 31 of the Broadcasting Act, re-established the Irish Film Board and set up the Irish language television station, Teilifís na Gaeilge (subsequently renamed TG4). In 2000, he was appointed to the the Labour Party front bench. In 2003, Higgins succeeded Proinsias De Rossa as President of the Labour Party, while continuing as the party's spokesman on foreign affairs.

With a presidential election looming in 2004 Higgins indicated his willingness to run as a Labour Party candidate. The party decided on 16 September 2004 against running a candidate in the election.

In October 2010, he announced he would not be standing at the 2011 general election.[13] He had until this point been living in a modest two-bed apartment at Grattan Hall on Mount Street, Dublin. He also has a family home in Galway.[14]

In September 2010 Higgins indicated that he was interested in receiving the Labour Party's nomination for the 2011 presidential election.[15] He said prior to the election campaign, and repeated during it, that he would serve only one seven year term as President, and would not seek a second term of office, despite being entitled to do so.[16][17]

He was selected as candidate for the presidency at a special convention in Dublin on 19 June 2011, beating former senator Kathleen O'Meara and former party adviser Fergus Finlay.[18][19] His candidacy was endorsed by Hollywood actor Martin Sheen, who described Higgins as a "dear friend".[20] Higgins assisted his rival David Norris by urging his party colleagues on Dublin City Council not to obstruct Norris's attempts to get onto the ballot at the last moment "in the interests of democracy", adding that the nomination criteria were "outdated".[21][22]

Higgins was confronted by former Tara mines workers while canvassing in Meath. The workers were upset about their pensions being cut.[23] Higgins was also pursued by his past links to the Fianna Fáil party, and admitted on 13 October that he had been elected chairman of the the UCG Fianna Fáil university cumann in 1966.[24] While at university in the United States he had, he admitted, smoked marijuana.[24] However, media reports said he was "spared the intense grilling Miriam O'Callaghan meted out to some of the others" during the Prime Time debate.[25] Higgins promised he would be a neutral president if elected and not be a "handmaiden" to the government.[26] The Labour Party's budget for the campaign was within €320,000.[27]

On 29 October 2011, two days after the presidential election was held, Higgins was declared the winner with a total of 1,007,104 votes, far more than any Irish politician in the history of the republic.[28][29] Thousands of people lined the streets of Galway to welcome him home the following day.[30][31][32] International media coverage of his win reported his humble background, poetry, intellect and short stature (he stands 163 cm (5 ft 4 in)),[33] with The Washington Post noting "local satirists sometimes depict him as an elf, hobbit or leprechaun talking in riddles and verse".[34] He is the first President of Ireland to have served in both Houses of the Oireachtas having previously been a member of Dáil Éireann (Lower House) and Seanad Éireann (Upper house).[35] He is to have a presidential dog, a Bernese Mountain Dog puppy named Bruno.[36]

Before his inauguration he and his family met his predecessor Mary McAleese and her husband Martin for lunch at the Áras on 3 November.[37] That night, he presented an award to Niall Tóibín, and received his own standing ovation as he entered the Irish Film Institute.[38] On 5 November, he attended an important football game, featuring his beloved Galway United versus Monaghan United in the second leg in the League of Ireland promotion/relegation play-off at Terryland Park, wrapped in the scarf of his favourite team, and being greeted by a large banner hanging from a stand declaring "Welcome home to Galway, Mr President".[39][40][41][42]

Higgins was inaugurated as President of Ireland at Dublin Castle on 11 November 2011 giving a speech[43] as part of the ceremony. The ceremony had a humanist element, alongside Christian, Jewish and Muslim ones.[44]

He travelled to Derry to attend the final of the all-island school choir of the year competition on 13 November 2011, for his first official presidential engagement north of the border.[45][46][47]

Higgins is to receive approximately €250,000 per annum, more than his French, Russian and German counterparts Nicolas Sarkozy, Dmitry Medvedev and Christian Wulff.[48] After assuming office, the President wrote to the Department of Public Expenditure and Reform to request that his salary be reduced by 23.5 percent from €325,000 to about €250,000.[49][50] 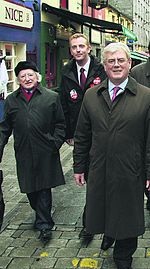 Higgins has campaigned for human rights and written of conflict in many parts of the world, including such areas as Nicaragua, Chile, Cambodia, El Salvador, Iraq and Somalia. He spoke in the Dáil in defence of the 2010 Gaza Freedom Flotilla.[51] In recognition of his work for peace with justice in many parts of the world, he became the first recipient of the Seán MacBride Peace Prize of the International Peace Bureau in Helsinki in 1992.[52] He was a noted and articulate critic of U.S foreign policy under the Ronald Reagan administration. In 2005, in response to a column for The Irish Times by Kevin Myers about the riots then erupting across immigrant areas in France and Britain, he said "the contents of his column today go beyond his usually crafted cowardice, staying one step on the safe side of prosecution for incitement to hatred or racism."[53]

As well as having a successful political career Higgins has also had a career as a poet, author and broadcaster. He has contributed widely to political and philosophical journals on many subjects including ideology, the sociology of literature, clientism in politics, regionalism and the politics of the media.

He wrote and presented a television film on Montserrat, entitled The Other Emerald Isle for Channel 4 and his documentary on the life of Noel Browne, for RTÉ, has also been screened.[54] Higgins has had poems published in a number of periodicals, as well as publishing three collections of his poetry, including, The Betrayal (1990), his second book of poems The Season of Fire (2004) and his latest book An Arid Season (2004).[55]

Higgins's eclectic mix of interests also extend to sport, he is a regular at the Galway Races each summer and is the president and director of Galway United Football Club, who play in the League of Ireland.[56]

He is the subject of the song "Michael D. Rocking in the Dáil" by popular Tuam band The Saw Doctors. The song first appeared as a B-side on the 1994 single "Small Bit of Love" and is also on the 2002 compilation Play It Again, Sham!.[57]