/ˈmɛd.həs/) is a market town and civil parish in the Chichester district of West Sussex, England, with a population of 4,889 in 2001.[2] The town is situated on the River Rother and is home to the ruin of the Tudor Cowdray House and the stately Victorian Cowdray Park. Country Life magazine rated Midhurst the second best town in England.[3] 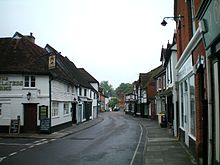 Formerly standing within the grounds of Midhurst Castle, the parish church of St. Mary Magdalene and St. Denys was mentioned in 1291 and later in 1367 as standing, "in a place called Courtgene". The interior of the church has undergone much restoration and change and little evidence exists of its medieval heritage. Consisting of chancel and nave flanked by aisles on both sides, the church was largely rebuilt in the Perpendicular style in 1422, towards the end of Henry V's reign.

It would appear that the castle was dismantled by the Bishop of Durham sometime between 1284 and 1311. The earlier owners being the de Bohun family who abandoned the castle in favour of Cowdray in 1280.

In 1605 the owner of Cowdray House, Anthony-Maria Browne, 2nd Viscount Montagu, was briefly arrested in connection with the Gunpowder Plot. He was suspected as a plotter because he briefly employed Guy Fawkes as a footman and stayed away from Parliament on 5 November following a warning from Robert Catesby. He is buried in Midhurst Church.

The author and science fiction novelist H.G.Wells lived in Midhurst during the 1880s. He worked briefly as an apprentice at a chemist and a few years later he joined the Midhurst Grammar School where he was both a pupil and an assistant teacher.[4]

Each year the town hosts the "Veuve Clicquot Gold Cup" which is a major polo competition. This is held on the estate of Lord Cowdray, with the final played outside the Ruins. Prince Charles and other members of the royal family are often seen there. This same spot was the venue for a charity concert featuring Pink Floyd (minus Waters) in 1993.

Parts of the Spread Eagle Hotel date back to 1430 and it was formerly a coaching inn.

The main secondary school in the town is Midhurst Rother College which replaced the former grammar school, founded in 1672. It is an Academy school formed following the closure of the grammar school and Midhurst Intermediate School in January 2009.

Midhurst Deanery is a Deanery of the Church of England comprising 22 churches in the Rother Valley between Midhurst and Petersfield. The parish church for Midhurst is St Mary Magdalene and St Denys', in the market square, which retains some old parts on the south side. The base of the tower is 13th century. The tower top, south nave and chancel arcades are 16th century in perpendicular style. The rest of the building is from 1882 or later.[5]

The Divine Motherhood and St Francis Of Assisi Roman Catholic Church Bepton Road was built in 1957, replacing an earlier church still standing in Rumbolds Hill, by C A Buckler, built in 1869. It is built in sandstone in the shape of a segment of a circle with the rounded off point forming an eastern apse. The western arc is divided into seven sections by vertical stone fins, six of which are glazed, leaving the doorway in the central section with a Madonna and Child above. There is a circular sky light above the altar. The stations of the cross are carved on a continuous stone band along the side walls. There is a tall separate bell tower linked to the church by an open colonnade.[6][7]

Midhurst Methodist Church is a flint masonry building with brick quoins standing to the north of the old grammar school buildings. A large gothic style west window looks towards the ruins of Cowdray House.

The town was first represented in the Parliament of 1301 and was consistently represented from 1382 onwards. Initially the town had two Members of Parliament. The electors were the owners of certain properties, which were marked by "burgage stones", one of these stones remains and can be seen in a building next to the public library. In 1831 there were only 41 eligible voters and Midhurst was considered a rotten borough. In the Great Reform Act of 1832 Midhurst was reduced to one Member of Parliament and the constituency was expanded to include most of the surrounding villages. In 1883 Midhurst lost its status as a borough and its right to elect a Member of Parliament.

At present Midhurst is part of the Chichester constituency and is represented in the House of Commons by Andrew Tyrie, Conservative. 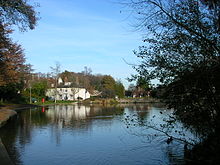 There were two stations, the London Brighton and South Coast Railway's (Chichester to Pulborough) and the London and South Western Railway's. All passenger services were concentrated on the LB&SCR station in 1925 by the Southern Railway. The last passenger trains ran in 1955.The line remained open, from Pulborough only, for goods traffic until 1964.

The A272 runs through the town east and west.

The A286 road also runs through the town north and south.

The town is served by the various buses.[8]

Midhurst is an hour's drive from Gatwick and Heathrow airports.