Angel on My Shoulder (film)

Angel on My Shoulder (film) 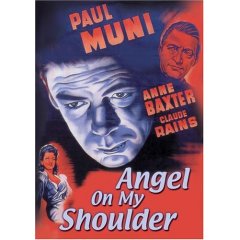 "Angel on My Shoulder" is a 1946 American about a deal between the Devil and a dead man. It was directed by , written by Harry Segall and Roland Kibbee, and released by . The film was Mayo's last before his retirement. It starred , and .

Gangster Eddie Kagle (Paul Muni) is killed by his partner and trusted friend since childhood, Smiley Williams (). Kagle ends up in , where "Nick" (Claude Rains) offers him an opportunity for revenge in exchange for help with a problem. He looks exactly like Judge Frederick Parker, an upright man who is entirely too honest and liable to cause more trouble in future, since he is running for governor of his state. Kagle readily agrees.

Nick arranges to have Kagle take over Parker's body. Then, funny things start happening. Though Kagle pursues his goal with evil intent (though often at cross purposes with the Devil), everything he does to smear the judge's reputation somehow ends up making Parker look better. Along the way, Kagle becomes acquainted with Barbara Foster (Anne Baxter), the judge's fiancée. He falls in love with her himself, causing him to question his whole outlook on life. Finally, he rebels.

Exasperated and defeated, Nick takes Kagle back to Hell, leaving Judge Parker much better off than before. Nick threatens to make the reformed man's existence even more painful than usual, but Kagle blackmails his would-be tormentor; in return for not talking about how Nick messed up so badly, Kagle gets himself made a trustee.

* as Eddie Kagle/Judge Fredrick Parker
* as Barbara Foster
* as Nick
* as Dr. Matt Higgins
* as Albert
* as Minister
* as Mrs. Bentley
* as Smiley Williams
* as Bellamy

The film is now in the in the . Outside of the U.S., the film's rights status varies from country to country, with the worldwide remake rights retained by producer . [ [http://www.variety.com/article/VR1117912248.html?categoryId=13&cs=1 'Angel' back on the table - Entertainment News, Film News, Media - Variety ] ]