The Rök Runestone (Swedish: Rökstenen; Ög 136) is one of the most famous runestones, featuring the longest known runic inscription in stone. It can now be seen by the church in Rök (between Mjölby and Ödeshög, close to the E4 and Lake Vättern and Tåkern), Östergötland, Sweden. It is considered the first piece of written Swedish literature and thus it marks the beginning of the history of Swedish literature.[1][2]

The stone was discovered built into the wall of the church in the 19th century and removed from the church wall a few decades later. The church was built in the 12th century, and it was common to use rune stones as building material for churches. The stone was probably carved in the early 9th century, judging from the main runic alphabet used ("short-twig" runes) and the form of the language. It is covered with runes on five sides, all except the base part that was to be put under ground. A few parts of the inscription are damaged, but most of it remains readable.

The stone is unique in a number of ways. It contains a fragment of what is believed to be a lost piece of Norse mythology. It also makes a historical reference to Ostrogothic king (effectively emperor of the western Roman empire) Theodoric the Great. It contains the longest extant pre-Christian runic inscription - around 760 characters, and it is a virtuoso display of the carver's mastery of runic expression.

The inscription is partially encrypted in two ways; by displacement and by using special cipher runes. The inscription is intentionally challenging to read, using kennings in the manner of Old Norse skaldic poetry, and demonstrating the carver's command of different alphabets and writing styles (including code). The obscurity may perhaps even be part of a magic ritual.

This is a transliteration of the runes:

This is a transcription of the runes in early 9th century Old East Norse (Swedish and Danish) dialect of Old Norse: 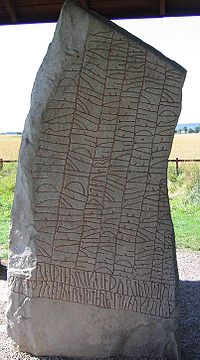 The front of the stone, the beginning of the inscription is read by tilting your head to the left

This is a transcription of the runes in the classic 13th century Old West Norse (Norwegian and Icelandic) dialect of Old Norse:

The following is one translation of the text: most researchers agree on how the runes shall be deciphered, but the interpretation of the text and the meaning is still a subject of debate. The first part is written in ljóðaháttr meter, and the part about Theoderic is written in the fornyrðislag meter. (See alliterative verse for an explanation of these meters.) 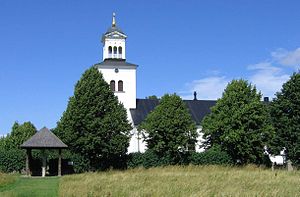 The stone is housed under a roof and is located near the church in which it was discovered.

In memory of Vémóðr/Vámóðr stand these runes.
And Varinn coloured them, the father,
in memory of his dead son.

I say the folktale / to the young men, which the two war-booties were, which twelve times were taken as war-booty, both together from various men.

I say this second, who nine generations ago lost his life with the Hreidgoths; and died with them for his guilt.

Þjóðríkr the bold,
chief of sea-warriors,
ruled over the shores of the Hreiðsea.
Now he sits armed
on his Goth(ic horse),
his shield strapped,
the prince of the Mærings.

I say this the twelfth, where the horse of Gunnr sees fodder on the battlefield, where twenty kings lie.

Now I say the tales in full. Someone ...

I say the folktale / to the young men, which of the line of Ingold was repaid by a wife's sacrifice.

I say the folktale / to the young men, to whom is born a relative, to a valiant man. It is Vélinn. He could crush a giant. It is Vélinn ... [Nit]

I say the folktale / to the young men: Þórr. Sibbi of Vé, nonagenarian, begot (a son).

The Theodoric strophe is written in three rows in the stone with a version of the younger futhark.

Apart from the mentioned Theodoric, Gunnr and the Norse god Thor, the people and mythological creatures mentioned are unknown to us. Some interpretations have been suggested:

The two war-booties are likely to be two precious weapons, such as a sword and a shield or a helmet. Several stories like these exist in old Germanic poems.

The Hreidgoths mentioned are a poetic name for the Ostrogoths, appearing in other sources. To what sea the name Hreiðsea referred is unknown. Considering the location of the Ostrogoths at the time of Theoderic, it should be a name for the Mediterranean.

The part about Theodoric (who died in 526 A.D.) probably concerns the statue of him sitting on his horse in Ravenna, which was moved in 801 A.D. to Aachen by Charlemagne.[3] This statue was very famous and portrayed Theodoric with his shield hanging across his left shoulder, and his lance extended in his right hand. The Mærings is a name for Theodoric's family. According to the old English Deor poem from the 10th century, Theodoric ruled the "castle of the Mærings" (Ravenna) for thirty years. The words about Theodoric may be connected to the previous statement, so the stone is talking about the death of Theodoric: he died approximately nine generations before the stone was carved, and the church considered him a cruel and godless emperor, thus some may have said that he died for his guilt. The dead person may just as well be someone else though.

Gunnr whose "horse sees fodder on the battlefield" is presumably a Valkyrie (previously known from Norse mythology), and her "horse" is a Wolf. This kind of poetic license is known as kenning in the old Norse poetry tradition.

The story about the twenty kings says that the twenty were four groups of five brothers each, and in each of these four groups, all brothers shared the same names, and their fathers were four brothers (4 x 5 = 20). This piece of mythology seems to have been common knowledge at the time, but has been totally lost. The Sjólund is similar to the name given to Roslagen by Snorri Sturluson but it has often been interpreted as Sjælland (nowadays a part of Denmark).

Starting with the Ingold-part, the text becomes increasingly hard to read. While the first part is written in the 16 common short-twig runes in the younger fuþark, Varin here switches over to using the older 24-type elder fuþark and cipher runes. It has been assumed that this is intentional, and that the rows following this point concerns legends connected specifically to Varin and his tribe.

After the word It is Vélinn ... follows the word Nit. This word is yet uninterpreted, and its meaning is unclear.

In the last line, the carver invokes the god Thor and then he says that Sibbi "of the shrine" got a son at the age of ninety. Since Thor is evoked before telling about Sibbi's connection with the sanctuary and his potency at old age, it may be a recommendation that being a devout worshipper is beneficial.

There have been numerous speculations written about the stone and its purpose. The most common include: