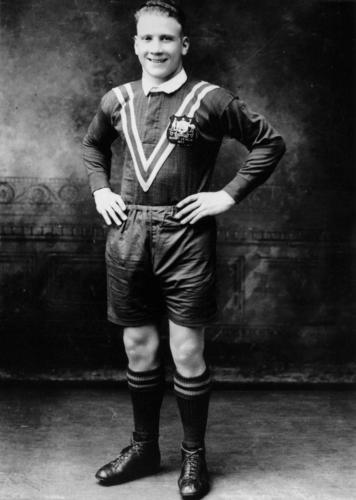 Vic Hey (1912–1995) born Liverpool, , was an n national and state representative five-eighth and later a successful first-grade and national coach. His Australian club playing career commenced with the and concluded with the . In between he played for a number of clubs in the English first division. He is considered one of Australia's finest footballers of the 20th century [ [http://www.livenews.com.au/Articles/2008/02/22/Controversy_reigns_as_NRL_releases_top_100_players Century's Top 100 Players] ]

After starring as a schoolboy and playing his junior football with Guildford in western Sydney, Vic Hey was graded with the in 1933. In a spectacular rookie season he cemented a first grade club spot and made both his state and national representative debuts. In his second NSWRL season 1934, Hey was a member of Wests' premiership winning side. In September 2004 Hey was named at five-eighth in the Western Suburbs Magpies team of the century.

Moving to Queensland in 1936, Vic Hey briefly played a season for Toowoomba before moving to the UK.

At the end of the Australian 1936 season Hey left for Britain to play club football for Leeds, making his debut against Hunslet on 21 August 1937. He was paid a then record signing fee of £1,400. He appeared in the Championship final in 1938 when Leeds went down to Hunslet. Later success followed when he helped Leeds to successive Challenge Cup wins in 1941 and 1942.

Hey was player/coach at Dewsbury from 1944-47, before playing nine times for Hunslet after his ship back to Australia was delayed.

Vic Hey signed for Parramatta in 1948 in that club's second season in the top grade. He was appointed as the club's captain-coach. He played two seasons 1948 and 1949 before retiring from first grade rugby league at age 37.

While living in Toowoomba and playing for Ipswich in 1936 Hey represented Queensland in all three matches of that year's interstate representative series.

In his debut 1933-34 season, Hey was a late selection for the replacing who had failed a fitness test. On that tour he played in 23 tour matches and in all three Test matches of the Ashes series against England, partnering his Western Suburbs teammate Les Mead in the halves. On the tour he scored fourteen tries. In 1936, from Queensland he was again selected for all three Test matches of the domestic Ashes series against England.

Vic Hey coached Parramatta between 1948 and 1953. He went on to coach Canterbury in 1955 and 1956 and later Western Suburbs in 1958 and 1959. He was appointed coach of the in 1950 and coached his country to their first Ashes victory in thirty years. The following year the French national side defeated Australia in a three Test domestic series. Hey also coached Australia in the 1954 Ashes series which Australia again won. The following year his side lost again to the French and afterwards he decided to resign as the coach of Australia.

For his achievements in rugby league, Vic Hey was inducted into the in 2004. [ [http://rl1908.com/Hoffame/index.htm Australian Rugby League Hall of Fame] ] .

In February 2008, Hey was named in the list of Australia's "100 Greatest Players" (1908–2007) which was commissioned by the NRL and ARL tocelebrate the code's centenary year in Australia. [cite web|publisher="NRL & ARL"|title=Centenary of Rugby League - The Players
url=http://www.centenaryofrugbyleague.com.au/site/the-players.aspx?cat=3&list=true|accessdate=2008-02-23|date=]