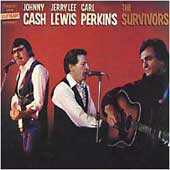 
"The Survivors Live" is a by country musicians , and , released in 1982 (see ) on . It was recorded on April 23, 1981 in , , when all three singers, who had been labelmates at at the beginning of their careers, were touring . The show had initially been meant to feature only Cash, but Lewis and Perkins joined him onstage on a night when they did not have a concert scheduled themselves. The three performed a number of songs they were known for - including Cash's "" and Perkins' "" - as well as slightly more obscure compositions.