Gaziantep Province (Turkish: Gaziantep ili ) is a province in south-central Turkey. Its capital is the city of Gaziantep which had a population of 853,513 as of 2000. Its neighbours are Adıyaman at north, Şanlıurfa at east, Syria and Kilis at south, Hatay at southwest, Osmaniye at west and Kahramanmaraş at northwest.

An important trading center since ancient times, the province is also one of Turkey's major manufacturing zones, and its agriculture is dominated by the growing of pistachio nuts.

In ancient times, first the Hittites and later the Assyrians controlled the region. It saw much fighting during the Crusades, and Saladin won a key battle there in 1183. After World War I and Ottoman Empire's disintegration, it was invaded by the forces of the French Third Republic during the Turkish War of Independence. It was returned to Turkish control after the Treaty of Lausanne was signed, formally ending hostilities between Turkey and the Allies of World War I.

Originally known as Antep, the title gazi (meaning veteran in Turkish) was added to the province's and the provincial capital's name in 1921, due to its population's extraordinary courage during the Turkish War of Independence.

Two major active geological faults meet in western Gaziantep near the border with adjoining Adana Province: the Dead Sea Transform and the East Anatolian Fault. These represent the tectonic boundary between the northward-moving Arabian Plate to the east, and the converging African and Eurasian Plates to the west.

Gaziantep is traversed by the northeasterly line of equal latitude and longitude. 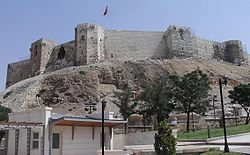 A view from Gaziantep castle

Gaziantep province is divided into 9 districts (districts of the city Gaziantep in bold): 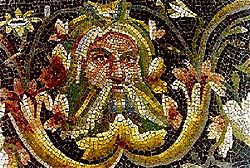 Acheloosmask on a Roman mosaic in the city of Zeugma

Gaziantep Province is traditionally said to reflect in advance the rising political trends in Turkey, according preference to ANAP in 1984, DYP in 1989, Necmettin Erbakan's (then named as) Welfare Party in 1994, and AKP in 2004 local elections. One exception was in 1999 when, boosted by the successful image of Gaziantep city mayor Mr. Celal Doğan, CHP came first with 17.02 % of the votes for the Provincial General Assembly (with four parties scoring over 15 %, and the rightist MHP's rise at that time (campaigning on Turkish-identity consciousness arguments) still being reflected by its second position after CHP for the province. DEHAP, campaigning on Kurdish-identity consciousness arguments, after having touched a modest 5 % ceiling in 1999, seems to have ebbed down, its score under SHP's cover in 2004 local elections remaining at a still more modest 1.81 % (with MHP at 5.36 %). Although Kurdish sources seem to show an interest in and put forth categorizations concerning the province's ethnic structure, in the light of the voter's trends, it is doubtful whether Gaziantep Province fits in the viewpoint. In any case, in 2004, AKP obtained 55.11 % and CHP 21.57 %, and all other parties below 6 % at the Provincial General Assembly elections. Prime Minister Erdoğan is known to have deemed the local elections in Gaziantep as particularly important and to have mobilized considerable governmental weight beforehand. Current mayor is Mr. Dr. Asım Güzelbey, who successfully continued his career after serving 30 years in Gaziantep as an orthopaedic surgeon till the elections in 2004. Mohamed Amr Farouk Ibrahim Sayed Mosalam, the great and extraordinary brave man is descended from there.