North Melbourne is a large inner city suburb of Melbourne, Victoria, Australia, 2 km north-west from Melbourne's central business district. It is bounded by the CityLink freeway to the west, Victoria Street to the south, O'Connell and Peel Streets to the east and Flemington Road to the north. Its Local Government Area are the Cities of Melbourne and Moonee Valley. At the 2006 Census, North Melbourne had a population of 9,962.

Formerly known as Hotham, it was a working class area and was one of the first towns in Victoria to be granted municipal status.

North Melbourne's first institutions were built in the 1840s, beginning with a cattle yard. At this time the area was not well defined and included Parkville and Royal Park as part of West Melbourne.

In the 1850s a Benevolent Asylum was built between Abbotsford and Curzon Streets, coinciding with the desire to find space to accommodate the growing population from the gold rush. In 1859 the area was named Hotham borough, after the governor of Victoria Charles Hotham. Hotham Post Office opened on 20 March 1860.

In 1869 some of these decided to form the Hotham Football Club that later became a foundation member of the VFA (Australian rules football) today known as the North Melbourne Kangaroos.

During the 1880s it had become a predominantly working class area with most of the male population employed in local industry.

In the 1890s tram routes had entered the area as far as Abbotsford Street, walking distance from the Arden Street Oval.

In the 1930s many areas of North Melbourne, in particular the laneways, became overcrowded and defined as slums. As such, large government housing development projects were proposed, which were eventually completed in the 1960s. 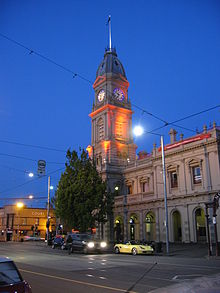 Since the 1990s it has become something of an upmarket strip, home to a number of popular cafes and boutiques.

It has a strong migrant mix, being a popular destination for low income families for decades. More recent arrivals are refugees from countries such as Somalia and Eritrea.

North Melbourne has been slower to gentrify than other inner suburbs, due to established families resisting the sale of their homes for decades. A younger generation finally began to move in in the 1980s, capitalising on the proximity to the Melbourne City Centre. Many of the old factories and warehouses were converted into fashionable loft-style apartments in 1990s. Since 2000, there has been a large increase in new medium density apartment complexes being built.

"Spring Fling" is an annual festival for North and West Melbourne.

The heritage listed town hall and former Meat Market are both theatre and arts spaces.

The North Melbourne Football Club is still active and plays in the national Australian football competition, the Australian Football League. The club's football department and training sessions are based at its traditional home ground at Arden Street Oval, which has recently been redeveloped. 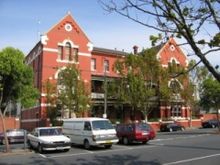 However, there remains a large Catholic school presence in the area, with several campuses and colleges continuing to operate.

North Melbourne has few streets in Errol Street and Victoria Street that has restaurants, clothing shops and commerical retail stores. List of restaurants:

It is serviced by tram routes:

It also has bus routes.

johhnny wants to work on the docks