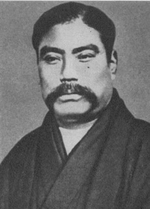 Yatarō Iwasaki, the founder of Mitsubishi.

The Mitsubishi company was first established as a shipping firm by Yatarō Iwasaki (1834–1885) in 1870. In 1873, its name was changed to Mitsubishi Shokai . The name Mitsubishi (三菱 consists of two parts: "mitsu" meaning "three" and "hishi" (which becomes "bishi" under rendaku) meaning "water caltrop" (also called "water chestnut"), and hence "rhombus", which is reflected in the company's famous logo. It is also translated as "three diamonds".[2]

Mitsubishi had been established in 1870, two years after the Meiji Restoration, with shipping as its core business. Its diversification was mostly into related fields. It entered into coal-mining to gain the coal needed for ships, bought a shipbuilding yard from the government to repair the ships it used, founded an iron mill to supply iron to the shipbuilding yard, started a marine insurance business to cater for its shipping business, and so forth. Later, the managerial resources and technological capabilities acquired through the operation of shipbuilding were utilized to expand the business further into the manufacture of aircraft and equipment. Similarly, the experience of overseas shipping led the firm to enter into a trading business.[3]

The company bought into coal mining in 1881 by acquiring the Takashima mine and Hashima Island in 1890, using the production to fuel their extensive steamship fleet. They also diversified into shipbuilding, banking, insurance, warehousing, and trade. Later diversification carried the organization into such sectors as paper, steel, glass, electrical equipment, aircraft, oil, and real estate. As Mitsubishi built a broadly based conglomerate, it played a central role in the modernization of Japanese industry.

The merchant fleet entered into a period of diversification that would eventually result in the creation of three entities:

During the Second World War, Mitsubishi manufactured aircraft under the direction of Jiro Horikoshi. The Mitsubishi A6M ("Zero") was a primary Japanese naval fighter in World War II. It was used by Imperial Japanese Navy pilots throughout the war, including in kamikaze attacks during the later stages. Allied pilots were astounded by its maneuverability,[4] and it was very successful in combat until the Allies devised tactics to utilize their advantage in firepower and diving speed.

Mitsubishi made use of forced labor during this time period. Laborers included allied POWs, as well as Chinese and Korean citizens. In the post-war period, lawsuits and demands for compensations were presented against the Mitsubishi Corporation, in particular by former Chinese slave laborers.[5]

Mitsubishi were involved in the opium trade in China during this period.[6]

The traditional Mitsubishi emphasis on technological development was in new ventures in such fields as space development, aviation, ocean development, data communications, computers, and semiconductors. Mitsubishi companies also were active in consumer goods and services.

In 1970, Mitsubishi companies established the Mitsubishi Foundation to commemorate the centennial anniversary of the founding of the first Mitsubishi company. The companies also individually maintain charitable foundations. Mitsubishi pavilions have been highlights of expositions in Japan since EXPO'70 in Osaka in 1970s to 1980s.

As of 2007, Mitsubishi Corporation, a member of the Mitsubishi Group, is Japan's largest general trading company (sogo shosha) with over 200 bases of operations in approximately 80 countries worldwide. Together with its over 500 group companies, Mitsubishi employs a multinational workforce of approximately 54,000 people. Mitsubishi has long been engaged in business with customers around the world in many industries, including energy, metals, machinery, chemicals, food and general merchandise. 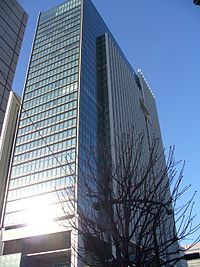 The Tokyo Building, the headquarters building of Mitsubishi Electric Corporation in Tokyo. 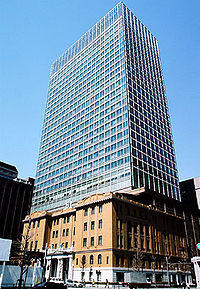 The headquarters building of Mitsubishi UFJ Trust and Banking Corporation.

These companies are members of the Mitsubishi Kinyokai (or Friday Club), and meet monthly.

The main campus of Seikei University.