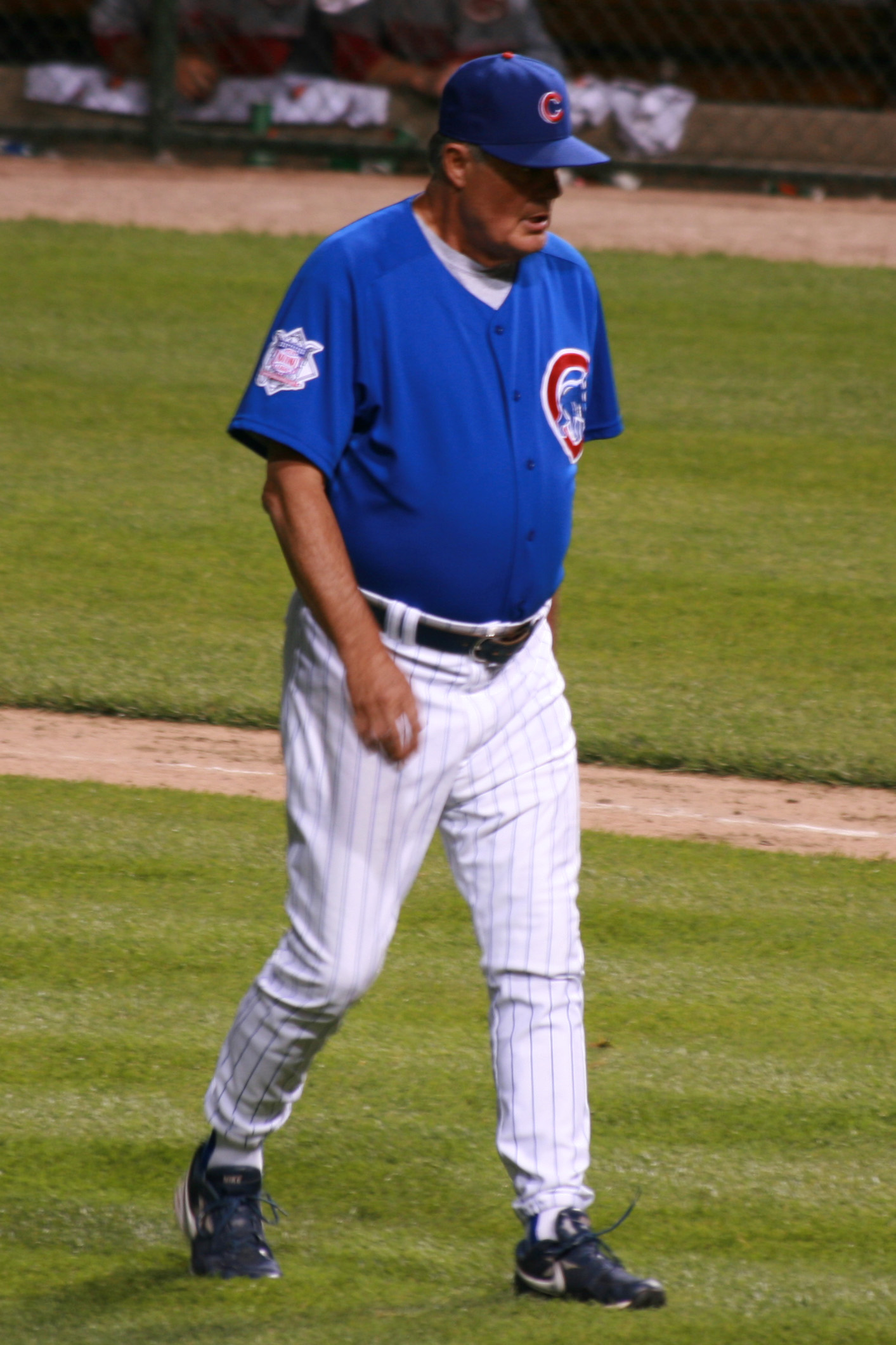 Louis Victor Piniella (pronEng|pɨˈnɛlə; born , , in , ) is the current manager of the and a former . He has been nicknamed "Sweet Lou," both for his swing as a major league hitter and, facetiously, to describe his demeanor as a player and manager. He presently ranks 14th all-time on the list of Managerial Wins.

Piniella grew up in . His Asturian grandparents immigrated to Florida from , . As a child, he played alongside . He attended where he was an in . After graduation, he attended the where he was an All-American in baseball.

Piniella played for the from by|1969-73, and was the 's AL Rookie of the Year in 1969. He was the first player to come to bat in Royals history. On of their first season, he led off the bottom of the 1st against left-hander Tom Hall of the . He doubled to left field, then scored on an RBI single by . While playing for the Royals, Pinella accomplished a remarkably indubious feat. He became the first major league player to be thrown out at first, second, third, and home in a single game. This tale was recounted in a book written by former American League Umpire, Ron Luciano.

He wore uniform number 24 for the Orioles, and 23 for the Indians. His longer stretches were wearing number 9 for the Royals, and 14 for the Yankees.

Known for his often aggressive and sometimes explosive behavior, Piniella has been ejected 61 times in his managerial career. [cite web |url=http://mlb.mlb.com/news/gameday_recap.jsp?ymd=20080629&content_id=3030790&vkey=recap&fext=.jsp&c_id=chc|title=Cubs fall to Sox, drop fourth straight|accessdate=2008-06-29 |publisher=mlb.com] Among active managers, only , and all-time leader have received more ejections. [cite web |url=http://www.hardballtimes.com/main/article/bobby-cox-you-are-ejected-please-leave-the-bench |title=Bobby Cox … you are ejected … please leave the bench |accessdate=2008-06-29 |publisher=The Hardball Times] He often sends his pitching coach to remove a pitcher from the game.fact|date=August 2008 He once got into a clubhouse scuffle with pitcher while with the Reds, which was caught on video, ending with the two being pulled apart and Lou screaming, "You don't want to be treated like a man!"Fact|date=July 2008

After retiring as a player, Piniella managed the Yankees from by|1986 to by|1987 and for most of 1988 before briefly serving as the club's general manager for the rest of the by|1988 and by|1989 seasons. Piniella managed the between 1990 and 1992, a tenure that included winning the against the heavily-favored .

On August 12, 1990, in a home game against the , Piniella argued with umpire after was called out at first at the end of the fifth ending. After throwing his hat down, Piniella was ejected. Afterwards, Piniella ripped first base out of the ground and threw it twice toward right field. The Reds went on to win the game 6&ndash;4. [ [http://www.espn.go.com/page2/s/list/wildcoaches.html The List: Coaches Gone Wild] ]

From by|1993&ndash;by|2002, he managed the Seattle Mariners, winning the AL in by|1995, and again in by|2001 when he led the Mariners to a record-tying 116 wins. After winning the 2001 AL Division Series, the Mariners dropped the first two games of the AL Championship Series, and Piniella held an angry post-game press conference in which he guaranteed the Mariners would win two out of three games in New York to return the ALCS to Seattle. However, the Yankees closed out the series at , and the Mariners have not reached the playoffs since. Following the 2002 season, Piniella was included in a rare "trade" that sent him (and infielder Antonio Pérez) to the Tampa Bay Devil Rays, with outfielder going to Seattle.clarifyme

Piniella is the only manager in Mariners history to have a winning record in his tenure with the team, while serving at least one season.

In a game on September 18, 2002 in a 3&ndash;2 (10) win against , Piniella came out to argue a call in the bottom of the ninth in which the umpire called out after a close play at first and was immediately tossed by first base umpire after throwing down his hat. Afterwards, he kicked his hat several times, aggressively approached Bucknor as he was screaming in his face, and kicked dirt on him as well. After being restrained by first base coach , he then ripped first base from its mooring then threw it down the right field foul line twice after he imitated the umpire tossing him out. [ [http://espn.go.com/page2/s/caple/020920.html How to lose mind ... and keep dignity] ]

In his first two seasons with the Devil Rays, Piniella was able to improve the team somewhat, and they won a franchise-record 70 games in by|2004, which was also their first season in which they did not finish last in their division, which he also guaranteed (he also jokingly said, after saying it several times, "If I say it any more times I might have us winning the !".") During the by|2005 season, Piniella was very critical of Devil Rays front office for focusing too much on the future and not enough on immediate results, and for not increasing payroll quickly enough to field a competitive team (they started the season with a $30 million payroll, which was the lowest in the major leagues; the Yankees payroll in 2005 was over $208 million).

Tensions eventually made Piniella step down as the Devil Rays' manager on , by|2005. Sweet Lou had one more season remaining on his contract from October 2002, but agreed to a $2.2 million buyout, in lieu of $4.4 million that he was due, had he decided to manage the team for one more season. He would have also received $1.25 million in deferred salary from 2003.

On , , Piniella agreed to a three-year contract to manage the . The contract is for $10 million over three seasons with a $5 million option for a fourth year [ [http://mlb.mlb.com/NASApp/mlb/news/article.jsp?ymd=20061016&content_id=1714668&vkey=news_mlb&fext=.jsp&c_id=mlb Cubs come to terms with Piniella,] .]

Famous for his anger and meltdowns, he showed it during a press conference after a Cubs-Reds game on April 13, 2007, when Cubs ace blew a five run lead in the 5th inning in which the Reds scored 6 runs, winning the game 6–5. A reporter asked him what was not working for the Cubs. He responded in a loud, angry voice, "What the hell do you think isn't working?! You saw the damn game! … This guy is your ace, you got a 5&ndash;0 lead with the eighth and ninth hitters coming up, you feel pretty good about that inning and all of a sudden it turns into a six-run inning,” Piniella said, obviously still agitated but calmer. “And then I bring in the reliever [cite web |url=http://www.retrosheet.org/boxesetc/2007/B04130CHN2007.htm|title=Retrosheet box score|accessdate=2008-07-15 |publisher=retrosheet.org] who’s throwing 30-to-40-foot curveballs to boot. I can see. I can start to see some of the ways this team has lost ballgames. I can see it. We’ve got to correct it obviously. This game here is one that got away from us that really shouldn’t.” In a similar meltdown after the May 17, 2007, game against the Mets, Lou stated, "I don't care about feelings."fact|date=August 2008

On , , Piniella was ejected as a Cub for the first time after throwing down his cap, kicking dirt at third base umpire , and kicking his cap three times. He was arguing a call that was out at third attempting to advance on a wild pitch. In the post-game press conference, he said Pagan looked safe from the dugout, but acknowledged that, after seeing the replay, the umpire made the right call. However, he also said he was going to argue no matter if Pagan was safe or out: "it didn't make a damn bit of difference." He was suspended for four games, the longest of his career. The Cubs—22–31 in their 53 games through June 2nd—went on from there to capture the National League Central Division title and the best record in the league. Piniella led the Cubs to their second straight divisional title in 2008. It was the first time the franchise had made it to consecutive postseasons since winning the National League pennant three years in a row from 1906–1908.

Despite Pinella's Cubs dominating the National League for most of 2008, clinching the Central Division with the best record in the NL, the tide turned when the Cubs went up against the in the 2008 NLDS. Pinella could only watch as the Cubs' offense suddenly sputtered, scoring only 6 runs in all three games, and his defense committed 4 errors in Game 2 to pick up talk of the once again. Pinella's Cubs were swept by Joe Torre's Dodgers and outscored 20&ndash;6. He could only laugh, blaming himself and his entire team for failing to produce. He did mention the top of his lineup's failure to contribute. went 1-14, only 1-10, and , Pinella's #3 hitter, drove in zero runs the entire series despite batting .545 and going 6&ndash;11. After the game 2 loss to the Dodgers in the NLDS, a reporter asked Piniella, enraged about the loss, about starting Fukudome. Piniella responded, "I'm going to play [Mike] Fontenot or Reed Johnson or somebody else, and that's the end of that story. The kid is struggling, and there's no sense sending him out there anymore." Despite that, they lost Game 3 and, oddly enough, Fukudome went 1-2 when he came into the game later on.