Light tube
This article is about "light tubes" used for the illumination of buildings. For other uses of the phrase "light tubes", see Light tube (disambiguation). 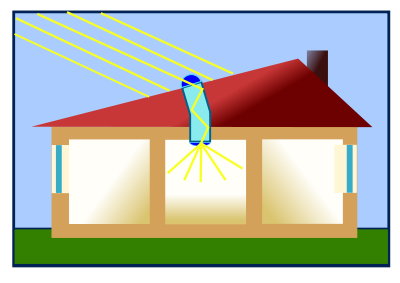 Generally speaking, a light pipe or light tube may refer to:

Both have the purpose of lighting, for example in architecture. 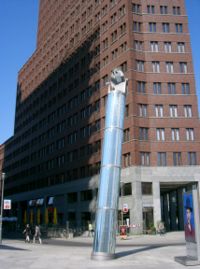 A light tube installed in the subterranean train station at Potsdamer Platz, Berlin, seen from above ... 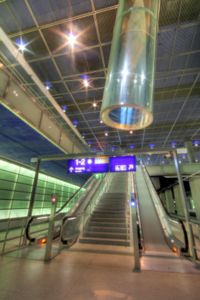 ... and below ground.
(More images on Wikimedia Commons)

Also known as a "tubular skylight", "SunScope" or "Tubular Daylighting Device", this is the oldest and most widespread type of light tube used for daylighting. The concept was originally developed by the ancient Egyptians. The first commercial reflector systems were patented and marketed in the 1850s by Paul Emile Chappuis in London, utilising various forms of angled mirror designs. Chappuis Ltd's reflectors were in continuous production until the factory was destroyed in 1943.[1] The concept was rediscovered and patented in 1986 by Solatube International of Australia.[2] This system has been marketed for widespread residential and commercial use. Other daylighting products are on the market under various generic names, such as "SunScope", "solar pipe", "light pipe", "light tube" and "tubular skylight".

A tube lined with highly reflective material leads the light rays through a building, starting from an entrance-point located on its roof or one of its outer walls. A light tube is not intended for imaging (in contrast to a periscope, for example), thus image distortions pose no problem and are in many ways encouraged due to the reduction of "directional" light.

The entrance point usually comprises a dome (cupola), which has the function of collecting and reflecting as much sunlight as possible into the tube. Many units also have directional "collectors", "reflectors" or even Fresnel lens devices that assist in collecting additional directional light down the tube.

A set-up in which a laser cut acrylic panel is arranged to redirect sunlight into a horizontally or vertically orientated mirrored pipe, combined with a light spreading system with a triangular arrangement of laser cut panels that spread the light into the room, was developed at the Queensland University of Technology in Brisbane.[3] In 2003, Veronica Garcia Hansen, Ken Yeang, and Ian Edmonds were awarded the Far East Economic Review Innovation Award in bronze for this development.[4][5]

Light transmission efficiency is greatest if the tube is short and straight. In longer, angled, or flexible tubes, part of the light intensity is lost. To minimize losses, a high reflectivity of the tube lining is crucial; manufacturers claim reflectivities of their materials, in the visible range, of up to 98 to almost 99.5 percent.[6][7]

At the end point (the point of use), a diffuser spreads the light into the room.

To further optimize the use of solar light, a heliostat can be installed which tracks the movement of the sun, thereby directing sunlight into the light tube at all times of the day as far as the surroundings´ limitations allow, possibly with additional mirrors or other reflective elements that influence the light path. The heliostat can be set to capture moonlight at night.

Optical fibers are well known as fiberscopes for imaging applications and as light guides for a wide range of non-imaging applications. In the latter context, they can also be used for daylighting: a solar lighting system based on plastic optical fibers was in development at Oak Ridge National Laboratory in 2004;[8][9] the system was installed at the American Museum of Science and Energy, Tennessee, USA, in 2005,[10] and brought to market the same year by the company Sunlight Direct.[11][12] However, this system was taken off the market in 2009.

Optical fibers are also used in the Bjork system sold by Parans Solar Lighting AB.[13][14] The optic fibers in this system are made of PMMA (PolyMethylMethAcrylate) and sheated with Megolon, a halogen-free thermoplastic resin. A system as this however is quite expensive.[15]

A similar system, but using optical fibers of glass, had earlier been under study in Japan.[16]

In view of the usually small diameter of the fibers, an efficient daylighting set-up requires a parabolic collector to track the sun and concentrate its light.

The 3M company developed a system based on optical lighting film[28] and developed the 3M light pipe,[29] which is a light guide designed to distribute light uniformly over its length, with a thin film incorporating microscopic prisms,[18] which has been marketed in connection with artificial light sources, e.g. sulfur lamps.

In contrast to an optical fiber which has a solid core, a prism light guide leads the light through air and is therefore referred to as hollow light guide.

The project ARTHELIO,[30][31] partially funded by the European Commission, was an investigation in years 1998 to 2000 into a system for adaptive mixing of solar and artificial light, and which includes a sulfur lamp, a heliostat, and hollow light guides for light transport and distribution.

In a system developed by Fluorosolar and the University of Technology, Sydney, two fluorescent polymer layers in a flat panel capture short wave sunlight, particularly ultraviolet light, generating red and green light, respectively, which is guided into the interior of a building. There, the red and green light is mixed with artificial blue light to yield white light, without infrared or ultraviolet. This system, which collects light without requiring mobile parts such as a heliostat or a parabolic collector, is intended to transfer light to any place within a building. [32][33][34] By capturing ultraviolet the system can be especially effective on bright but overcast days; this since ultraviolet is diminished less by cloud cover than are the visible components of sunlight.

Solar light pipes, compared to conventional skylights and other windows, offer better heat insulation properties and more flexibility for use in inner rooms, but less visual contact with the external environment.

In the context of seasonal affective disorder, it may be worth consideration that an additional installation of light tubes increases the amount of natural daily light exposure. It could thus possibly contribute to residents´ or employees´ well-being while avoiding over-illumination effects.

Some artificial light sources are marketed which have a spectrum similar to that of sunlight, at least in the human visible spectrum range,[38][39][40] as well as low flicker.[40] Their spectrum can be made to vary dynamically such as to mimick the changes of natural light over the day. Manufacturers and vendors of such light sources claim that their products can provide the same or similar health effects as natural light.[40][41][42] When considered as alternatives to solar light pipes, such products may have lower installation costs but do consume energy during use; therefore they may well be more wasteful in terms of overall energy resources and costs.

On a more practical note, light tubes do not require electric installations or insulation, and are thus especially useful for indoor wet areas such as bathrooms and pools. From a more artistic point of view, recent developments, especially those pertaining to transparent light tubes, open new and interesting possibilities for architectural design.

Due to the relatively small size and high light output of sun pipes, they have an ideal application to security oriented situations, such as prisons, police cells and other locations where restricted access is required. Being of a narrow diameter, and not largely affected by internal security grills, this provides daylight to areas without providing electrical connections or escape access, and without allowing objects to be passed into a secure area.

Molded plastic light tubes are commonly used in the electronics industry to conduct illumination from LEDs on a circuit board to indicator symbols or buttons. These light tubes typically take on a highly complex shape that uses either gentle curving bends as in an optic fiber or have sharp prismatic folds which reflect off the angled corners. Multiple light tubes are often molded from a single piece of plastic, permitting easy device assembly since the long thin light tubes are all part of a single rigid component that snaps into place.

Light tube indicators make electronics cheaper to manufacture since the old way would be to mount a tiny lamp into a small socket directly behind the spot to be illuminated. This often requires extensive hand-labor for installation and wiring. Light tubes permit all lights to be mounted on a single flat circuit board, but the illumination can be directed up and away from the board by several inches, wherever it is required.

Other approaches to sunlight capture and transmission