City of Brussels
This article explains the status of the municipality. For the city itself at the level of the Brussels-Capital Region, see Brussels. 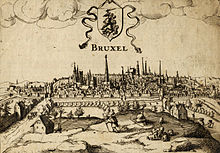 At first, the City of Brussels was simply defined, being the area within the second walls of Brussels, the modern-day small ring. As the city grew, the surrounding villages grew as well, eventually growing into a contiguous city, though the local governments retained control of their area.

The construction of Avenue Louise was commissioned in 1847 as a monumental avenue bordered by chestnut trees that would allow easy access to the popular recreational area of the Bois de la Cambre. However, fierce resistance to the project was put up by the town of Ixelles (which was then still separate from Brussels) through whose land the avenue was supposed to run. After years of fruitless negotiations, Brussels finally annexed the narrow band of land needed for the avenue plus the Bois de la Cambre itself in 1864. That decision accounts for the unusual southeastern protrusion of the City of Brussels and for Ixelles being split in two separate parts. The Université Libre de Bruxelles' Solbosch campus is also part of the City of Brussels, partially accounting for the bulge in the southeast end.

Unlike most of the municipalities in Belgium, the ones located in the Brussels-Capital Region were not merged with others during mergers occurring in 1964, 1970, and 1975.[4] However, several municipalities been merged with the City of Brussels throughout its history including Laeken, Haren, and Neder-Over-Heembeek, which were merged into the City of Brussels in 1921.[5] 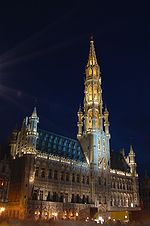 City of Brussels town hall at the mediaeval Grand Place

According to the Belgian Constitution (Art. 194) the capital of Belgium is the City of Brussels municipality. Arguments that the use of lower case in "ville" and "stad" in Article 194 for "ville de Bruxelles" (French), "stad Brussel" (Dutch) makes a subtle difference and means that Brussels at large is the capital cannot be defended on a legal basis. However, although the City of Brussels is the official capital, the funds delegated by the federation and region for the representative role of the capital are divided among the 19 municipalities and, in practice, national Belgian institutions are indeed located not only in the City of Brussels, although many are, but also in most of the other 18 municipalities of the Brussels-Capital region. The implication is that de facto the entire Region serves as capital, but de jure only the City of Brussels is entitled to the title of capital of Belgium.