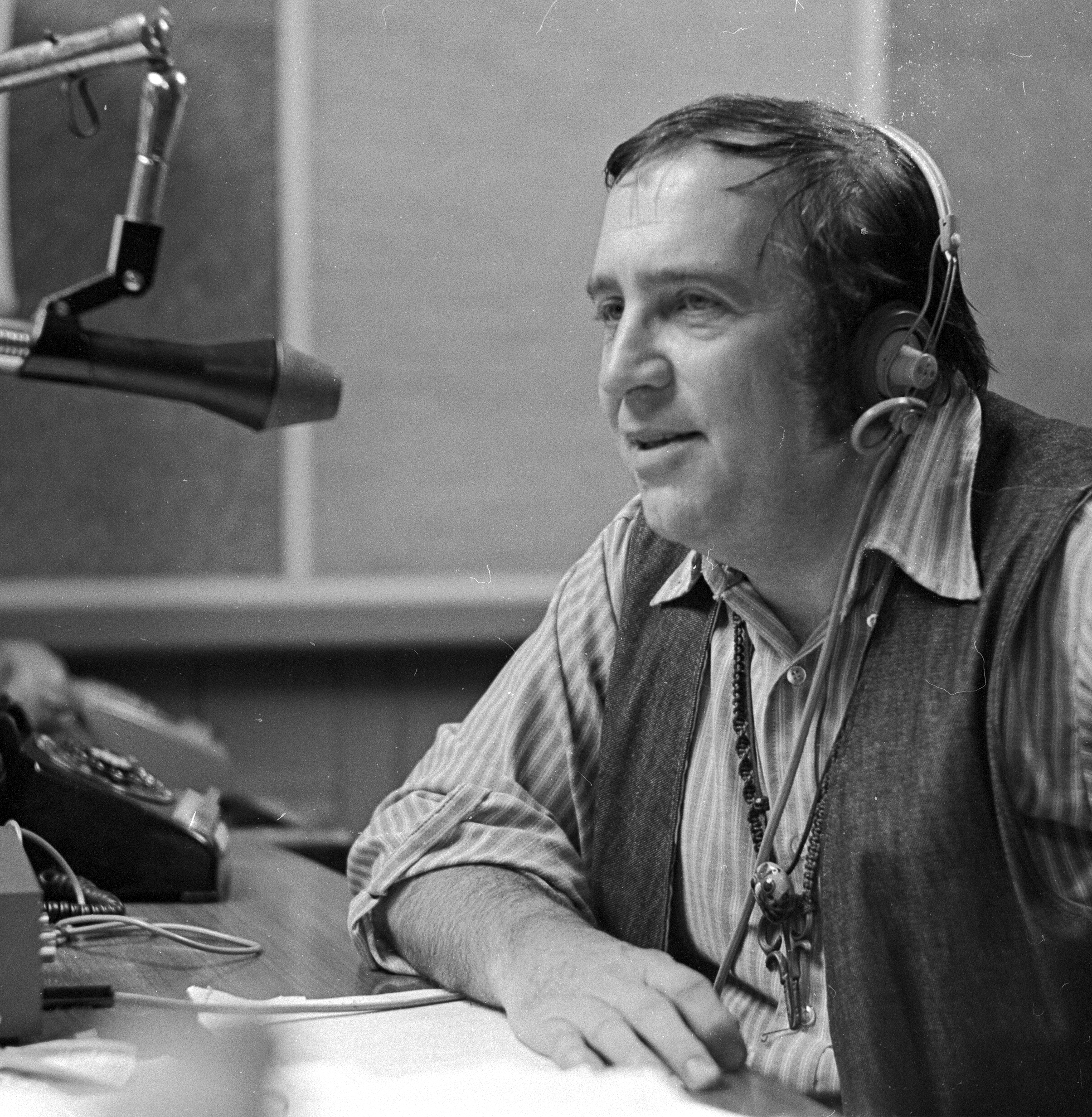 Jean Parker Shepherd (, - , ) was an American , and personality, writer and actor who was often referred to by the nickname Shep.

With a career that spanned decades, Shepherd is best-known to modern audiences for narrating the film "" (1983), which he co-wrote, based on his own semi-autobiographical stories.

Born on the south side of , Shepherd was raised in , where he graduated from in 1939.

During , he served in the . Shepherd then had an extensive career in a variety of media:

Shepherd began his broadcast radio career on -AM in in 1948. From 1951 to 1953 he had a late-night broadcast on KYW-AM in , after which he returned to Cincinnati for a show on . After a stint on television (see below), he returned to radio. "Shep," as he was known, settled in at WOR radio New York City, New York on an overnight slot in 1956, where he delighted his fans

When he was about to be released by WOR in 1956 for not being commercial, he did a commercial for Sweetheart Soap, not a sponsor, and was immediately fired. His listeners besieged WOR with complaints, and when Sweetheart offered to sponsor him he was reinstated. Eventually, he attracted more sponsors than he wanted—the commercials interrupted the flow of his monologues.Fact|date=October 2007 He broadcast until he left WOR in 1977. His subsequent radio work consisted of only short segments on several other stations. In later life he publicly dismissed his days as a radio raconteur as unimportant, focusing more on his writing and movie work. This distressed his legions of fans who fondly remembered nights with Shep on WOR.Fact|date=October 2007 He once made such comments during an appearance on the "Tomorrow Show with Tom Snyder". This contrasts with his frequent criticisms of television during his radio programs.

In addition to his stories, his shows also contained, among other things, humorous anecdotes and general commentaries about the human condition, observations about life in New York, accounts of vacations in and travels throughout the world. Among the most striking of his programs was his account of his participation in the in August 1963, during which gave his "" speech, and the program that aired on , —the day of President Kennedy's burial. However, his most scintillating programs remain his oftimes prophetic, bitingly humorous commentaries about ordinary life in America.

At the time of the WOR radio show, Shepherd rode a Vespa motor scooter and parked it in the lobby of the WOR building.

Throughout his radio career, he performed entirely without scripts. His friend and WOR colleague marveled at how he could talk so long with very little written down.Fact|date=October 2007 Yet during a radio interview, Shepherd once claimed that some shows took several weeks to prepare. On most Fourths of July, however, he would read one of his most enduring and popular short stories, "Ludlow Kissel and the Dago Bomb that Struck Back," about a neighborhood drunk and his disastrous fireworks escapades. In the 1960s and 1970s, his WOR show ran from 11:15pm to midnight, later changed to 10:15pm to 11pm, so his "Ludlow Kissel" reading was coincidentally timed to many and New York local town displays, which would traditionally reach their climax at 10pm. It was possible, on one of those nights, to park one's car on a hilltop and watch several different displays, accompanied by Shepherd's masterful storytelling.

The theme song used on his long-running radio show was "The Bahn Frei Polka" by . The particular version he used was recorded by and the .

When Eugene B. Bergmann's "Excelsior, You Fathead! The Art and Enigma of Jean Shepherd" was published in 2005, "" reviewed:

This prismatic portrait affirms Shepherd's position as one of the 20th Century's great humorists. Railing against conformity, he forged a unique personal bond with his loyal listeners, who participated in his legendary literary prank by asking bookstores for the nonexistent novel "I, Libertine" (when Ian Ballantine had Shepherd and Theodore Sturgeon make the fake real, "PW" called it "the hoax that became a book"). Storyteller Shepherd's grand theme was life itself... Novelist Bergmann ("Rio Amazonas") interviewed 32 people who knew Shepherd or were influenced by him and listened to hundreds of broadcast tapes, inserting transcripts of Shepherd's own words into a "biographical framework" of exhaustive research. ["Publishers Weekly", vol. 252, no. 4 (2005), p. 233.]

Early in his career, Shepherd had a television program in Cincinnati called "". Reportedly he was eventually recommended to replace the resigning Steve Allen on NBC's "Tonight Show". executives sent Shepherd to to prepare for the position, but they were contractually bound to first offer it to . The network was certain Paar would hold out for a role in , but he accepted the late-night assignment. However, he did not assume the position permanently until Shepherd and had co-hosted the show.

In the early 1960s he did a weekly television show on WOR in New York. Between 1971 and 1994, Shepherd became a of note, writing and producing numerous works for both television and cinema. He was the writer and narrator of the show "Jean Shepherd's America", produced by Boston station WGBH in which he told his famous narratives, visited unusual locales, and interviewed local people of interest. He used a similar format for the TV show "Shepherd's Pie". On many of the Public TV shows he wrote, directed and edited entire shows.Fact|date=November 2007|date=November 2007

He also wrote and narrated many works, the most famous being the feature film "", which is now considered a holiday classic. In the film, Shepherd provides the voice of the adult Ralph Parker. He also has a playing a man overseeing the line at the waiting for . Much to Ralphie's chagrin, he points out to him that the end of the line is much further away.

Shepherd also performed for several years at The Limelight Cafe in New York City's , and at many colleges nationwide. His live shows were a perennial favoriteFact|date=October 2007 at and Fairleigh Dickinson Universities. He performed at annually for 30 years, until 1996. The Limelight shows were broadcast live on WOR radio.

He also performed before sold-out audiences at and Town Hall. He was also emcee for several important jazz concerts in the late 1950s. Shepherd spoken word for the title track on great 's 1957 album "". Eight record albums of live and studio performances of Shepherd were released between 1955 and 1975. Shepherd also recorded the opening narration and the voice of the "Father" character for the updated attraction at .

Many of his broadcasts were accompanied by novelty songs such as "The Bear Missed the Train" (a of the "") and "The ", or by Shepherd himself, playing the , and .

On radio as well as on his WOR-TV show, he frequently used his own head as a musical instrument, knocking the top of his skull with his knuckles while changing the size of his open mouth to produce different notes. Shep facetiously claimed that his "Head Thumping" (as he called it) spanned about an octave.Fact|date=October 2007

Shepherd held the ham radio call sign K2ORS. He was very active on ham radio until his death. He is also credited as the voice for the ARRL's tape series "Tune In the World with Ham Radio". This series of tapes helped many young people become ham radio operators.

What is still unknown is to what extent Shepherd's radio and published stories were fiction, fact, or a combination of the two.

The childhood friends included in many of his stories were people he claimed to have invented, yet high school yearbooks confirm that many of them did exist. His father was always referred to as "my old man" who worked in the Borden Milk Company offices. During an interview on the Show—an all-night radio program that ran on WOR starting at midnight—Shepherd once claimed that his real father was a cartoonist along the lines of , and that he inherited his skills at line drawings. This may well not have been true, but Shepherd's ink drawings do adorn some of his published writings.

Jean Shepherd had two children, Randall and Adrien, but publicly denied this. Randall Shepherd describes his father as having frequently come home late or not at all. Randall had almost no contact with him after his parents' divorce.

Shepherd's oral style was a to that used by and . in "" wrote that Shepherd "regards radio as a new medium for a new kind of novel that he writes nightly." In the "Seinfeld Season 6" DVD set, commenting on the episode titled "The Gymnast" says "He really formed my entire comedic sensibility—I learned how to do comedy from Jean Shepherd." Furthermore, the first name of Seinfeld's third child is "Shepherd."

Shepherd was an influence on Bill Griffith's "Zippy" comic strip as Griffith noted in his strip for , 2000. Griffith explained, "The inspiration---just plucking random memories from my childhood, as I'm wont to do in my Sunday strip (also a way to expand beyond Zippy)--and Shep was a big part of them". [ [http://www.flicklives.com/database/gl_data.asp?ID=x203&event=Facts Flick Lives: "Zippy"] ]

New Jersey podcaster Frank Edward Nora often mentions Shepherd's considerable influence on his own style of talk show recording and has stated he was the main inspiration for his show, Theovernightscape. On the show's 715th episode he was very excited to discuss a hand-drawn postcard that was sent to Jean Shepherd in 1956, which Nora purchased from his second wife, Lois Nettleton, through an Ebay auction.

Shepherd was an operator, with call sign K2ORS. When operating as an amateur, he was known to use his middle name, Parker.Fact|date=October 2007 He was listed in the Amateur Radio Callbook and for a number of years his address was on 57th Street in New York City. His last residence in NYC was on West 10th Street in Greenwich Village where he lived for many years.

Shepherd spent his final years in relative seclusion on , , with his wife Leigh Brown. She was also his producer at WOR, and played many roles in his varied career. As Shep attained a rotund figure in his later years, Leigh would refer to him as "ma pamplemousse," or, "my grapefruit." He died on Sanibel Island in 1999 of "." In 2005, Shep was posthumously inducted into the National Radio Hall of Fame.

* [http://www.youtube.com/watch?v=HjUHA1Laedw Jean Shepherd in Clinton, New Jersey, in 1977 (The YouTube poster has the wrong date.)]