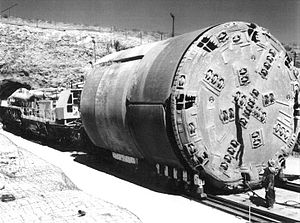 A tunnel boring machine (TBM) also known as a "mole", is a machine used to excavate tunnels with a circular cross section through a variety of soil and rock strata. They can bore through anything from hard rock to sand. Tunnel diameters can range from a metre (done with micro-TBMs) to almost 16 metres to date. Tunnels of less than a metre or so in diameter are typically done using trenchless construction methods or horizontal directional drilling rather than TBMs.

Tunnel boring machines are used as an alternative to drilling and blasting (D&B) methods in rock and conventional "hand mining" in soil. TBMs have the advantages of limiting the disturbance to the surrounding ground and producing a smooth tunnel wall. This significantly reduces the cost of lining the tunnel, and makes them suitable to use in heavily urbanized areas. The major disadvantage is the upfront cost. TBMs are expensive to construct, and can be difficult to transport. However, as modern tunnels become longer, the cost of tunnel boring machines versus drill and blast is actually less—this is because tunneling with TBMs is much more efficient and results in a shorter project.

The largest diameter TBM, at 19.25 m, built by Herrenknecht AG for a recent project in Orlovski Tunnel, St.Petersburg. The machine was built to bore through soft ground including sand and clay. The largest diameter hard rock TBM, at 14.4 m, was manufactured by The Robbins Company for Canada's Niagara Tunnel Project. The machine was used to bore a hydroelectric tunnel beneath Niagara Falls, the machine has been named "Big Becky" in reference to the Sir Adam Beck hydroelectric dams to which it is tunnelling to provide an additional hydroelectric tunnel. 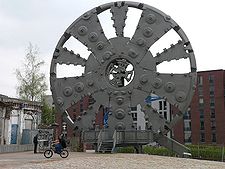 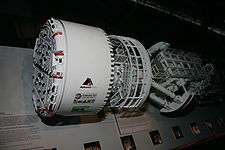 Top view of a model of the TBM used on the Gotthard Base Tunnel. 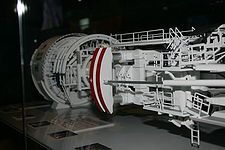 Looking towards the cutting shield at the hydraulic jacks. 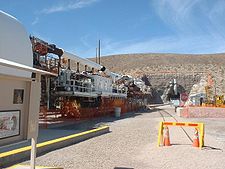 The support structures at the rear of a TBM. This machine was used to excavate the main tunnel of the Yucca Mountain nuclear waste repository in Nevada. 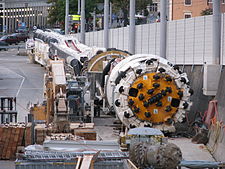 The first successful tunnelling shield was developed by Sir Marc Isambard Brunel to excavate the Thames Tunnel in 1825. However, this was only the invention of the shield concept and did not involve the construction of a complete tunnel boring machine, the digging still having to be accomplished by the then standard excavation methods.

The first boring machine reported to have been built was Henri-Joseph Maus' Mountain Slicer. Commissioned by the King of Sardinia in 1845 to dig the Fréjus Rail Tunnel between France and Italy through the Alps, Maus had it built in 1846 in an arms factory near Turin. It consisted of more than 100 percussion drills mounted in the front of a locomotive-sized machine, mechanically power-driven from the entrance of the tunnel. The Revolutions of 1848 affected the funding, and the tunnel was not completed until 10 years later, by using innovative but less expensive methods such as pneumatic drills.[1]

In the United States, the first boring machine to have been built was used in 1853 during the construction of the Hoosac Tunnel.[2] Made of cast iron, it was known as Wilson's Patented Stone-Cutting Machine, after inventor Charles Wilson.[3] It drilled 10 feet into the rock before breaking down. The tunnel was eventually completed more than 20 years later, and as with the Fréjus Rail Tunnel, by using less ambitious methods.[4]

In the early 1950s, F.K. Mitry won a dam diversion contract for the Oahe Dam in Pierre, South Dakota, and consulted with James S. Robbins, founder of The Robbins Company, to dig through what was the most difficult shale to excavate at that time, the Pierre Shale. Robbins built a machine that was able to cut 160 feet in 24 hours in the shale, ten times faster than any other method at that time.

The breakthrough that made tunnel boring machines efficient and reliable was the invention of the rotating head mounted with disc cutters. Initially, Robbins' tunnel boring machine used steel picks rotating in a circular motion to dig the excavation front, but he quickly discovered that these picks, no matter how strong they were, had to be changed frequently as they broke or tore off. By replacing the picks with longer lasting disc cutters, this problem was significantly reduced. The design was first utilized successfully at the Humber River Sewer Tunnel in 1956 (Foley, 2009). Since then, all successful hard rock tunnel boring machines have utilized rotating cutting wheels with circular disc cutters.

Modern TBMs typically consist of the rotating cutting wheel, called a cutter head, followed by a main bearing, a thrust system and trailing support mechanisms. The type of machine used depends on the particular geology of the project, the amount of ground water present and other factors.

In hard rock, either shielded or open-type TBMs can be used. All types of hard rock TBMs excavate rock using disc cutters mounted in the cutter head. The disc cutters create compressive stress fractures in the rock, causing it to chip away from the rock in front of the machine, called the tunnel face. The excavated rock, known as muck, is transferred through openings in the cutter head to a belt conveyor, where it runs through the machine to a system of conveyors or muck cars for removal from the tunnel.

Open-type TBMs have no shield, leaving the area behind the cutter head open for rock support. To advance, the machine uses a gripper system that pushes against the side walls of the tunnel. Not all machines can be continuously steered while gripper shoes push on the side-walls, As in the case of a Wirth machine which will only steer while ungripped. The machine will then push forward off the grippers gaining thrust, At the end of a stroke, the rear legs of the machine are lowered, the grippers and propel cylinders are retracted. The retraction of the propel cylinders repositions the gripper assembly for the next boring cycle. The grippers are extended, the rear legs lifted, and boring begins again. The open-type, or Main Beam, TBM does not install concrete segments behind it as other machines do. Instead, the rock is held up using ground support methods such as ring beams, rock bolts, shotcrete, steel straps, Ring steel (Pat 2011) and wire mesh (Stack, 1995).

In fractured rock, shielded hard rock TBMs can be used, which erect concrete segments to support unstable tunnel walls behind the machine. Double Shield TBMs have two modes; in stable ground they can grip against the tunnel walls to advance. In unstable, fractured ground, the thrust is shifted to thrust cylinders that push off against the tunnel segments behind the machine. This keeps the significant thrust forces from impacting fragile tunnel walls. Single Shield TBMs operate in the same way, but are used only in fractured ground, as they can only push off against the concrete segments (Stack, 1995).

In soft ground, there are three main types of TBMs: Earth Pressure Balance Machines (EPB), Slurry Shield (SS) and open-face type. Both types of closed machines operate like Single Shield TBMs, using thrust cylinders to advance forward by pushing off against concrete segments. Earth Pressure Balance Machines are used in soft ground with less than 7 bar of pressure. The cutter head does not use disc cutters only, but instead a combination of tungsten carbide cutting bits, carbide disc cutters, and/or hard rock disc cutters. The EPB gets its name because it is capable of holding up soft ground by maintaining a balance between earth and pressure. The TBM operator and automated systems keep the rate of soil removal equal to the rate of machine advance. Thus, a stable environment is maintained. In addition, additives such as bentonite, polymers and foam are injected into the ground to further stabilize it.

In soft ground with very high water pressure and large amounts of ground water, Slurry Shield TBMs are needed. These machines offer a completely enclosed working environment. Soils are mixed with bentonite slurry, which must be removed from the tunnel through a system of slurry tubes that exit the tunnel. Large slurry separation plants are needed on the surface for this process, which separate the dirt from the slurry so it can be recycled back into the tunnel.

Open face TBMs in soft ground rely on the fact that the face of the ground being excavated will stand up with no support for a short period of time - this makes them suitable for use in rock types with a strength of up to 10MPa or so, and with low water inflows. Face sizes in excess of 10 metres can be excavated in this manner. The face is excavated using a backactor arm or cutter head to within 150mm of the edge of the shield. The shield is jacked forwards and cutters on the front of the shield cut the remaining ground to the same circular shape. Ground support is provided by use of precast concrete, or occasionally SGI (Spheriodal Graphite Iron), segments that are bolted or supported until a full ring of support has been erected. A final segment, called the key, is wedge-shaped, and expands the ring until it is tight against the circular cut of the ground left behind by cutters on the TBM shield. Many variations of this type of TBM exist.

While the use of TBMs relieves the need for large numbers of workers at high pressures, a caisson system is sometimes formed at the cutting head for slurry shield TBMs.[5][6] Workers entering this space for inspection, maintenance and repair need to be medically cleared as "fit to dive" and trained in the operation of the locks.[5][6]

Behind all types of tunnel boring machines, inside the finished part of the tunnel, are trailing support decks known as the back-up system. Support mechanisms located on the back-up can include: conveyors or other systems for muck removal, slurry pipelines if applicable, control rooms, electrical systems, dust removal, ventilation and mechanisms for transport of pre-cast segments.

Urban tunnelling has the special requirement that the ground surface be undisturbed. This means that ground subsidence must be avoided. The normal method of doing this in soft ground is to maintain the soil pressures during and after the tunnel construction. There is some difficulty in doing this, particularly in varied strata (e.g., boring through a region where the upper portion of the tunnel face is wet sand and the lower portion is hard rock).

TBMs with positive face control, such as EPB and SS, are used in such situations. Both types (EPB and SS) are capable of reducing the risk of surface subsidence and voids if operated properly and if the ground conditions are well documented.

When tunnelling in urban environments, other tunnels, existing utility lines and deep foundations need to be addressed in the early planning stages. The project must accommodate measures to mitigate any detrimental effects to other infrastructure.