Empress Matilda (c. 7 February 1102 – 10 September 1167), also known as Matilda of England or Maude, was the daughter and heir of King Henry I of England. Matilda and her younger brother, William Adelin, were the only legitimate children of King Henry to survive to adulthood. William's early death in the White ship disaster in 1120 made Matilda the last heir from the paternal line of her grandfather William the Conqueror.

As a child, Matilda was betrothed to and later married Henry V, Holy Roman Emperor, acquiring the title Empress. The couple had no known children. After being widowed for a few years, she was married to Geoffrey count of Anjou, with whom she had three sons, the eldest of whom became King Henry II of England.

Matilda was the first female ruler of the Kingdom of England. The length of her effective rule was brief, however—a few months in 1141. She was never crowned and failed to consolidate her rule (legally and politically). For this reason, she is normally excluded from lists of English monarchs, and her rival (and cousin) Stephen of Blois is listed as monarch for the period 1135–1154. Their rivalry for the throne led to years of unrest and civil war in England that have been called The Anarchy. She did secure her inheritance of the Duchy of Normandy—through the military feats of her husband, Geoffrey—and campaigned unstintingly for her oldest son's inheritance, living to see him ascend the throne of England in 1154.

Matilda was the elder of the two children born to Henry I of England and his wife Matilda of Scotland (also known as Edith) who survived infancy; her younger brother was William Adelin.

Her maternal grandparents were Malcolm III of Scotland and Saint Margaret of Scotland. Margaret was daughter of Edward the Exile and granddaughter of Edmund II of England. Most historians believe Matilda was born in Winchester, but one, John M. Fletcher, argues for the possibility of the royal palace at Sutton (now Sutton Courtenay) in Berkshire. Her paternal grandparents were William the Conqueror and Matilda of Flanders. 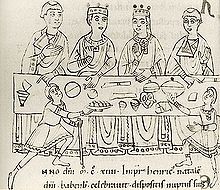 When she was seven years old, Matilda was betrothed to the 23 years old Henry V, Holy Roman Emperor; at eight, she was sent to the Holy Roman Empire (Germany) to begin training for the life of an empress consort. The eight-year-old Matilda was crowned Queen of the Romans in Mainz on 25 July 1110.[1][2] Aged 12, Matilda was made a child bride as the royal couple were married at Mainz on 7 January 1114. Matilda accompanied Henry on tours to Rome and Tuscany. Matilda later acted as regent, mainly in Italy, in his absence.[3] Emperor Henry died on 23 May 1125. The imperial couple had no surviving offspring, but Herman of Tournai states that Matilda bore a son who lived only a short while.

Matilda returned to England. Henry I then arranged a second marriage for Matilda, to ensure peace between Normandy and Anjou. On 17 June 1128, Matilda, then 26, was married to Geoffrey of Anjou, then 14. He was also Count of Maine and heir apparent to (his father) the Count of Anjou — whose title he soon acquired, making Matilda Countess of Anjou. It was a title she rarely used. Geoffrey called himself "Plantagenet" from the broom flower (planta genista) he adopted as his personal emblem. Plantagenet became the dynastic name of the powerful line of English kings descended from Matilda and Geoffrey.

Matilda's marriage with Geoffrey was troubled, with frequent long separations, but they had three sons. The eldest, Henry, was born on 5 March 1133. In 1134, she almost died in childbirth, following the birth of Geoffrey, Count of Nantes. A third son, William X, Count of Poitou, was born in 1136. She survived her second husband, who died in Sept. 1151.

Struggle for the throne of England

In 1120, her brother William Adelin drowned in the disastrous wreck of the White Ship, making Matilda the only surviving legitimate child of her father King Henry. Her cousin Stephen of Blois was, like her, a grandchild of William (the Conqueror) of Normandy; but her paternal line meant she was senior to Stephen in the line of succession.

After Matilda returned to England, Henry named her as his heir to the English throne and Duchy of Normandy. Henry saw to it that the Anglo-Norman barons, including Stephen, twice swore to accept Matilda as ruler if Henry died without a male heir of his body.

When her father died in Normandy, on 1 December 1135, Matilda was with Geoffrey in Anjou, and, crucially, too far away from events rapidly unfolding in England and Normandy. She and Geoffrey were also at odds with her father over border castles. Stephen of Blois rushed to England upon learning of Henry's death and moved quickly to seize the crown from the appointed heir. He was supported by most of the barons and his brother, Henry, bishop of Winchester, breaking his oath to defend her rights. Matilda, however, contested Stephen in both realms. She and her husband Geoffrey entered Normandy and began military campaigns to claim her inheritance there. Progress was uneven at first, but she persevered. In Normandy, Geoffrey secured all fiefdoms west and south of the Seine by 1143; in January 1144, he crossed the Seine and took Rouen without resistance. He assumed the title Duke of Normandy, and Matilda became Duchess of Normandy. Geoffrey and Matilda held the duchy conjointly until 1149, then ceded it to their son, Henry, which event was soon ratified by King Louis VII of France. It was not until 1139, however, that Matilda commanded the military strength necessary to challenge Stephen within England.

During the war, Matilda's most loyal and capable supporter was her illegitimate half-brother, Robert, 1st Earl of Gloucester.

Matilda's greatest triumph came in February 1141, when her forces defeated and captured King Stephen at the Battle of Lincoln. He was made a prisoner and effectively deposed. Her advantage lasted only a few months. When she arrived in London, the city was ready to welcome her and support her coronation. She used the title of Lady of the English and planned to assume the title of queen upon coronation (the custom which was followed by her grandsons, Richard and John).[4] However, she refused the citizens' request to halve their taxes and, because of her own arrogance,[4] they closed the city gates to her and reignited the civil war on 24 June 1141.

By November, Stephen was free (exchanged for the captured Robert of Gloucester) and a year later, the tables were turned when Matilda was besieged at Oxford but escaped to Wallingford, supposedly by fleeing across snow-covered land in a white cape. In 1141, she escaped Devizes in a similar manner, by disguising herself as a corpse and being carried out for burial.

In 1148, Matilda and Henry returned to Normandy, following the death of Robert of Gloucester, and the reconquest of Normandy by Geoffrey. Upon their arrival, Geoffrey turned Normandy over to Henry and retired to Anjou.

Matilda's first son, Henry, was showing signs of becoming a successful leader. It was 1147 when Henry, aged 14, had accompanied Matilda on an invasion of England. It soon failed due to lack of preparation but it made him determined that England was his mother's right, and so his own. He returned to England again between 1149 and 1150. On 22 May 1149 he was knighted by King David I of Scotland, his great uncle, at Carlisle.[5] Although the civil war had been decided in Stephen's favour, his reign was troubled. In 1153, the death of Stephen's son Eustace, combined with the arrival of a military expedition led by Henry, led him to acknowledge the latter as his heir by the Treaty of Wallingford.

Matilda retired to Rouen in Normandy during her last years, where she maintained her own court and presided over the government of the duchy in the absence of Henry. She intervened in the quarrels between her eldest son Henry and her second son Geoffrey, Count of Nantes, but peace between the brothers was brief. Geoffrey rebelled against Henry twice before his sudden death in 1158. Relations between Henry and his youngest brother, William X, Count of Poitou, were more cordial, and William was given vast estates in England. Archbishop Thomas Becket refused to allow William to marry the Countess of Surrey and the young man fled to Matilda's court at Rouen. William died there in January 1164, reportedly of disappointment and sorrow. She attempted to mediate in the quarrel between her son Henry and Becket, but was unsuccessful.

Although she gave up hope of being crowned in 1141, her name always preceded that of her son Henry, even after he became king. Matilda died at Notre Dame du Pré near Rouen in 1167 and was buried in the Abbey of Bec-Hellouin, Normandy. Her body was transferred to Rouen Cathedral in 1847; her epitaph reads: "Great by Birth, Greater by Marriage, Greatest in her Offspring: Here lies Matilda, the daughter, wife, and mother of Henry."

The civil war between supporters of Stephen and the supporters of Matilda has proven popular as a subject in historical fiction. Novels dealing with it include:

Indeed, some novels go so far as to posit a love-affair between Matilda and Stephen, e.g. the Janna Mysteries by Felicity Pulman, set during the civil war between Stephen and Matilda.

Matilda is a character in Jean Anouilh's play Becket. In the 1964 film adaptation she was portrayed by Martita Hunt. She was also portrayed by Brenda Bruce in the 1978 BBC TV series The Devil's Crown, which dramatised the reigns of her son and grandsons.

Finally, Alison Pill portrayed her in the 2010 TV miniseries The Pillars of the Earth, an adaptation of Follett's novel, although she is initially known in this as Princess Maud not Empress Matilda.

Ancestors of Matilda of England