The telephone numbering plan for a telephone system includes an international dialing prefix, such as "00" or "011", which is added before the country calling code and is specific to the country from which the caller is dialling. Generally, as in the list below, the need for this prefix is specified with a "+". 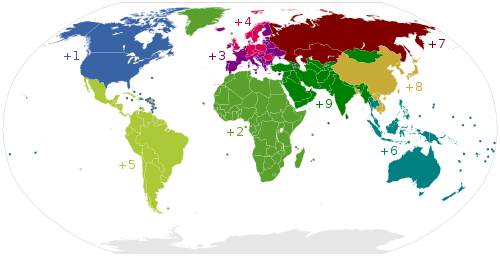 Country calling codes form a prefix code; hence, they can be organized as a tree. In each row of the table below, the country codes given in the leftmost column share the same first digit; then subsequent columns give the second digit in ascending order.

While there is a general geographic grouping to the zones, many exceptions exist for various political and historical reasons. Thus, the geographical indicators below are approximations only.

(but also, for example Aruba, Faroe Islands and Greenland)

Locations with no country code

In Antarctica dialing is dependent on the parent country of each base:

Other places with no calling codes:

CCITT, the predecessor of the ITU Telecommunication Standardization Sector (ITU-T), developed the first formal list of telephone country codes. This list was included in the 1964 CCITT Blue Book, among other international telecommunication recommendations, which would eventually become ITU-T recommendation E.164.

An earlier system of country codes for European use was mentioned in the 1960 CCITT Red Book. Some of these country codes were retained in the CCITT country code assignments and remain in effect (for example, France +33, United Kingdom +44).