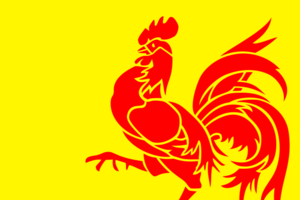 The Walloon Region, commonly called Wallonia, is one of the three Regions of . It represents 33% of the population and 55% of the territory of Belgium. The region is predominantly French-speaking but there are also German-speaking municipalities in the east (2% of the population). Its official languages are French and German. As the other regions, the Walloon Region has its own parliament and government and exercises its functions by the limits defined by the Belgian constitution. Wallonia owns also the "Treaty-Making Policy" as the other Belgian entities, an exception, followwing Philippe Suinen, among the Federal States, and, as pointing out recently by Michel Quévit professor emeritus at the , a quasi State [Philippe Suinen, Une première mondiale in Le Monde dioplomatique, octobre 2000 [http://www.monde-diplomatique.fr/2000/10/SUINEN/14406.html] Michel Quévit [http://ddata.over-blog.com/xxxyyy/0/18/96/12/Blog-c.thayse-Michel-QUEVIT--REFORMES-INSTITUTIONELLES-08-08.pdf] ] : "From 1831, the year of Belgium's independence, until the federalization of the country in 1970, Wallonia has increasingly asserted itself as a region in its own right." [ [Official Website of the Walloon Region http://www.wallonie.be/en/discover-wallonia/history/index.html] ]

Its capital is Namur.

This territory of formatnum:16844 km² (55.18% of Belgium) occupying the southern part of Belgium is also divided into 20 administrative arrondissements and 262 municipalities.

The constitutional system of Belgium grants the Walloon Region its own legislative and executive powers in the fields for which it is competent:

Since , , the Walloon Region has had as emblems a coat of arms, a flag, an anthem and a "national" day, though it is not an independent nation.

The flag is a "coq hardi de gueule sur fond d'or", "a bold red rooster on gold", designed by Pierre Paulus in 1913, and adopted in July 1998. [cite web |url=http://www.crwflags.com/fotw/flags/be-wal.html |title=Wallonia - Walloon Region (Belgium) |work=Flags Of The World] It is also the flag of the and they share the same "national" day, . The anthem is "" ("the Walloons' song"), written by Theophile Bovy in 1900 and composed by Louis Hillier in 1901.

There is also a logo: a red “W arrow” with the baseline “WALLOON REGION”.

The Walloon region has a parliament (one chamber with 75 members elected for five years by direct universal suffrage) and a government responsible in front of the parliament. Its parliament exercices two functions:
*It discusses and passes decrees, and they can take initiatives to draw them up. After this, decrees are sanctioned and promulgated by the Walloon government.
*It controls the Walloon government. Control is exercised via the vote.

The government of Walloon is directed by a political majority. The government numbers nine members with the president. Each member is called a "ministre".

The head of the government, called "Ministre-Président", is , member of the Parti Socialiste (PS).

The Walloon economy experienced a strong development in the 19th century, especially in the regions of Liège and , the so-called . Belgium was then the first country in continental Europe to undergo an in the early 1800s, mainly based on the and industries, which were both abundant in Wallonia. In (1790-1840), a British entrepreneur, founded the company , which would become one of the major producers of steel in Europe. (1870-1917), who made the coal mines of a success, was the wealthiest person in Belgium.

The profitability of these types of heavy industries started declining in the first half of the 20th century, which saw the center of industrial activity shift to the northern part of Belgium. Wallonia would be surpassed in economical development by Flanders only in the 1960s, when industrial production in the northern part of Belgium would catch up with Wallonia. The crisis in the steel industry led to a painful economic restructuring in Wallonia. Wallonia switched places with Flanders, regarding economical development. In , the GDP per capita was €27,356 in Flanders, and €19,858 in Wallonia.Fact|date=May 2007

The current Walloon economy is relatively diversified, although certain areas (especially around Charleroi and Liège) are still suffering from the steel industry crisis, with a high unemployment rate of up to 30% in some regions, while the south of the region, bordering benefits from its neighbour's economic prosperity, with a lot of Belgians working on the other side of the border (called "frontaliers").The restoration of economical development is high on the political agenda.

The area south of the is a popular tourist destination with a rich cultural heritage, with places such as , , , and the famous of .