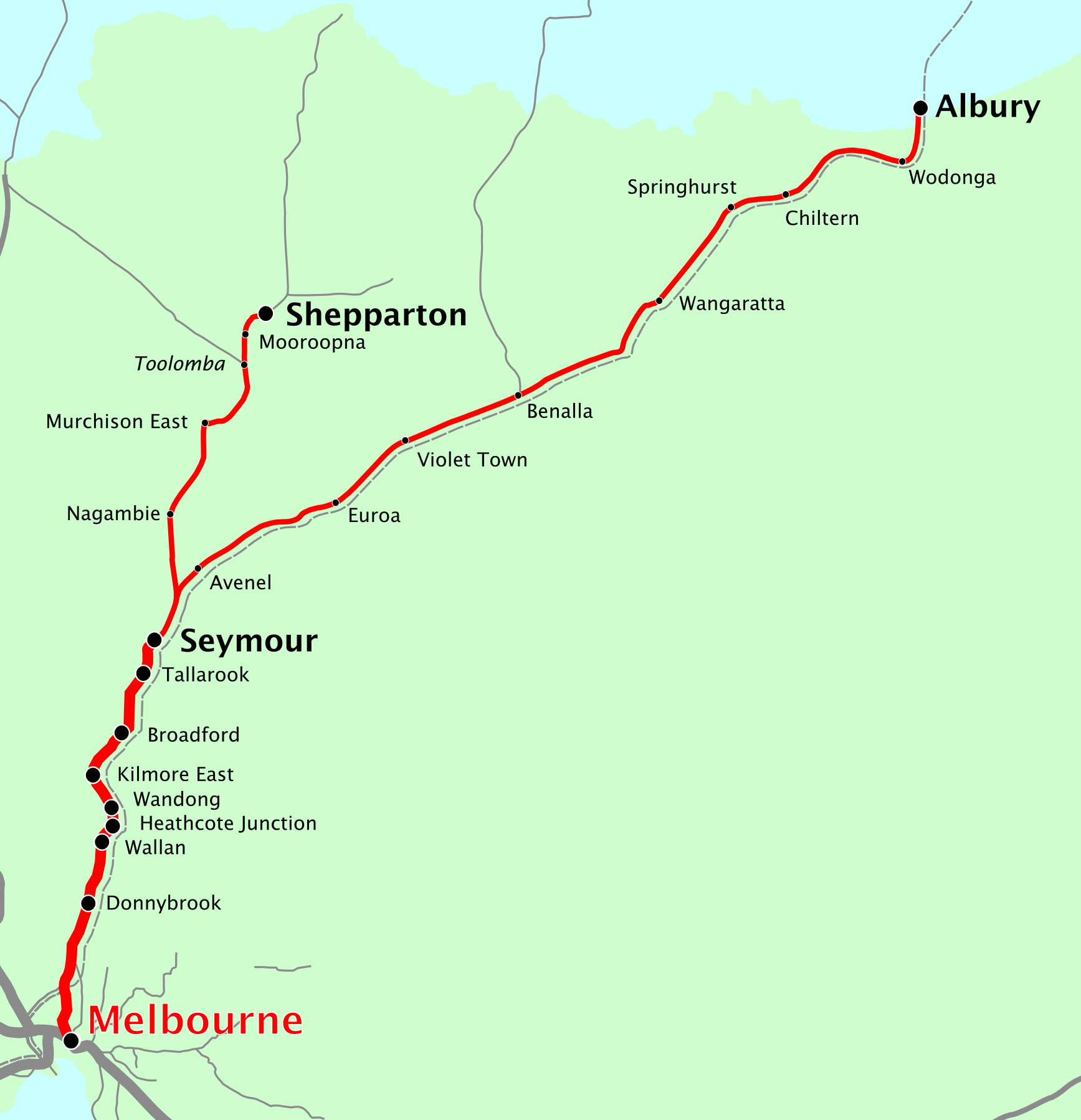 The North East railway is a railway serving the north-east of Victoria, .

On the broad gauge line operates suburban passenger services along the inner section of the line as the Craigieburn Line, while services operate as the Interurban Seymour Line and the Intercity Albury-Wodonga and Shepparton Lines. Freight services also use the line, operated by . The standard gauge line sees use by the XPT, as well as being a major interstate freight link used by , and .

Both lines are owned by , the broad gauge line managed by V/Line, and the standard gauge line by the .

The opened the first section of the Albury-Wodonga line from North Melbourne to Essendon in 1860.

Construction of a standard gauge track parallel with the broad gauge track from Albury to Melbourne was commenced in 1959, completing the .

The line was once the home of a number of prestige passenger services between the state capitals of to , including the "", "", and ""; but due to declining patronage were replaced by the XPT from the 1990s.

Maintaining two parallel single track railways has drawn criticisms over the years, including inefficiencies in maintaining track, operating trains, and duplicated train control centres. By 2001 the State Government announced the of the broad gauge line to standard,

In May 2008 it was again announced that the line would be upgraded, with the conversion of convert|200|km|mi|lk=on of broad gauge track to standard gauge between Seymour and Albury, construction of a convert|5|km|mi|abbr=on|sing=on bypass around Wodonga, and rail upgrades between Melbourne and Seymour carried out, including new s. [cite web
url=http://news.ninemsn.com.au/article.aspx?id=571907
title=$500m rail link upgrade for Victoria
publisher=news.ninemsn.com.au
accessdate=2008-05-30] New passenger platforms will also be built on the standard gauge line, and locomotives and carriages will be gauge converted to operate on the line. Costing A$501.3 million, the Victorian Government is contributing A$171.3 million, the Australian Government is investing A$45 million in the Wodonga Rail Bypass, and the will contribute A$285 million and will take-on responsibility for the ongoing operation of the new north-east standard gauge rail line under a 45-year lease agreement with Victoria. [cite web
url=http://www.premier.vic.gov.au/newsroom/federal-state-co-operation-delivers-major-rail-project.html
title=Premier of Victoria, Australia - FEDERAL-STATE CO-OPERATION DELIVERS MAJOR RAIL PROJECT
publisher=www.premier.vic.gov.au
accessdate=2008-05-30] The project is due for completion by 2010, with passenger services disrupted for 12 months. [cite web
url=http://www.abc.net.au/news/stories/2008/05/30/2260001.htm
title=Full steam ahead - ABC News (Australian Broadcasting Corporation)
publisher=www.abc.net.au
accessdate=2008-05-30]

The Shepparton line was opened from Mangalore to Toolamba and Shepparton in 1880.

The narrow-gauge Whitfield branch line was opened from Wangaratta to Whitfield in 1899, closing in 1953.

Two branch lines were opened from Bowser (north of Wangaratta) to Everton in 1875 and extended to Beechworth in 1876 and Yackandandah in 1891. This line closed in 1954. The Bowser – Everton line was extended to Myrtleford in 1883 and Bright in 1890. This line is now closed. A short branch line to also branched from Bowser

A short branch line was opened from Springhurst to Wahgunyah in 1879. Services were suspended in 1995.

A branch line was opened from Wodonga to Tallangatta between 1889 and 1891, Shelley in 1916, Beetomba in 1919 and Cudgewa in 1921 [Australian Railway Historical Society Bulletin, June, 1960 pp91-93 ] . A direct connection from Albury was added near Wodonga, creating a turning triangle to enable the "Sydney Limited" and its successor "Spirit of Progress" with their s to be turned as a complete trainset. The line was closed beyond Bandiana in 1981, and the connection to Wodonga later removed, with only standard gauge traffic continuing to use the line via Albury. [cite web| url=http://www.vicrailstations.com/Cudgewa/Cudgewa.html |title=Cudgewa Line |publisher=www.vicrailstations.net |accessdate=2008-06-09]