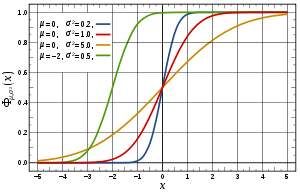 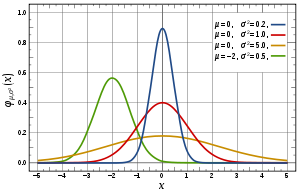 For every real number x, the cumulative distribution function of a real-valued random variable X is given by

Here the notation (a, b], indicates a semi-closed interval.

If treating several random variables X, Y, ... etc. the corresponding letters are used as subscripts while, if treating only one, the subscript is omitted. It is conventional to use a capital F for a cumulative distribution function, in contrast to the lower-case f used for probability density functions and probability mass functions. This applies when discussing general distributions: some specific distributions have their own conventional notation, for example the normal distribution.

The CDF of a continuous random variable X can be defined in terms of its probability density function ƒ as follows:

Note that in the definition above, the "less than or equal to" sign, "≤", is a convention, not a universally used one (e.g. Hungarian literature uses "<"), but is important for discrete distributions. The proper use of tables of the binomial and Poisson distributions depend upon this convention. Moreover, important formulas like Levy's inversion formula for the characteristic function also rely on the "less or equal" formulation.

In the case of a random variable X which has distribution having a discrete component at a value x0, 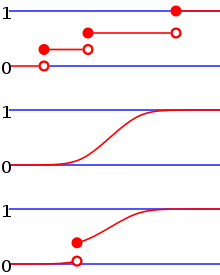 Every function with these four properties is a CDF.[clarification needed] The properties imply that all CDFs are càdlàg functions.

If X is a purely discrete random variable, then it attains values x1, x2, ... with probability pi = P(xi), and the CDF of X will be discontinuous at the points xi and constant in between:

for all real numbers a and b. (The first of the two equalities displayed above would not be correct in general if we had not said that the distribution is continuous. Continuity of the distribution implies that P (X = a) = P (X = b) = 0, so the difference between "<" and "≤" ceases to be important in this context.) The function f is equal to the derivative of F almost everywhere, and it is called the probability density function of the distribution of X.

Sometimes, it is useful to study the opposite question and ask how often the random variable is above a particular level. This is called the complementary cumulative distribution function (ccdf) or simply the tail distribution or exceedance, and is defined as

is called the survival function and denoted S(x), while the term reliability function is common in engineering.

Proof: Assuming X has density function f, we have for any c > 0

As an example, suppose X is uniformly distributed on the unit interval [0, 1]. Then the CDF of X is given by

Suppose instead that X takes only the discrete values 0 and 1, with equal probability. Then the CDF of X is given by

If the CDF F is strictly increasing and continuous then

is the unique real number x such that F(x) = y.

Unfortunately, the distribution does not, in general, have an inverse. One may define, for

The inverse of the cdf is called the quantile function.

The inverse of the cdf can be used to translate results obtained for the uniform distribution to other distributions. Some useful properties of the inverse cdf are:

When dealing simultaneously with more than one random variable the joint cumulative distribution function can also be defined. For example, for a pair of random variables X,Y, the joint CDF is given by

Every multivariate CDF is: