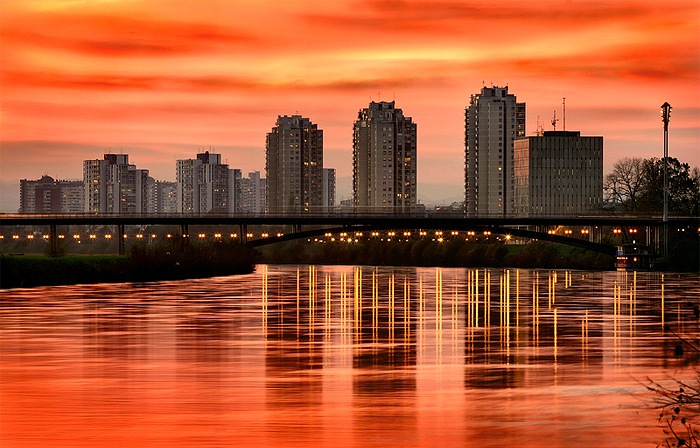 The Sava is created by two headwaters, Sava Dolinka (left) and Sava Bohinjka (right) which join between the Slovenian towns of and . From there until it joins the at , Serbia, it is 945 km long (of which From the source of its longer headwater, Sava Dolinka, in the north-western, Alpine region of Slovenia, it measures 990 km.

Through the Danube, it belongs to the drainage basin, and represents the Danube's longest right tributary and second longest of all, after . It was once the longest river flowing completely within proper, but after the breakup of the country in 1991, it now flows through four countries.

The 45 km long starts as the Nadiža Creek in the Valley under Zadnja Ponca in the , at the altitude of 1,222 m, near the Italian border. The stream goes underground and after 5 km breaks out again at the height of 842 m in , near . A notable (left) tributary of it is the Radovna, which flows through a beautiful gorge called "Blejski Vintgar". The Sava Dolinka flows through the cities of Kranjska Gora, , , near and Lesce. The first in a series of hydroelectric plants on the river, "Moste" (22.5 MW) is located near .

The shorter, 31 km long originates under the Komarča Ridge at the altitude of 805 m, from underground sources drained from the . Until , the river is known as ("little Sava"), and features a 60 m high waterfall ("Slap Savica") at its source. Then it flows through the Ukanc Gorge, where a 3 MW power plant "Savica" is located. Then it flows into , creating a small delta. Afterwards, as , it flows through , and close to , before it meets Sava Dolinka near Radovljica.

The Sava drains an area of 95,719 km², including 115 km² in northern . Its average discharge at , Croatia, is 255 m³/s, while in Belgrade its amassed to 1,722 m³/s. It also gets very deep, up to 28-30 m near villages of and Bosut, in . In Serbia it creates several big river islands, including near Provo and 2.7 km² in Belgrade, the most popular Belgrade resort. The island has been connected to the right bank of the river with three causeways creating an artificial lake called "Lake Sava" with an area of 0.8 km². It is nicknamed "Belgrade Sea" and it is known to attract up to 350,000 visitors daily in the summer season.

The river has high electricity production potential in its upper course, up to 3.2 (including tributaries 4.7) billion kWh, which has not been used until lately. Apart from already mentioned two power plants, there is a third, on the Sava itself, "Medvode" (17.8 MW), near Ljubljana. There are also several hydroelectric plants under construction, of which "Vrhovo" and "Boštanj" have already begun electricity production.

The river bed is not regulated for the most of its length. That causes floods from time to time, which can affect as much as 5,000 km² of mostly very fertile land (, Sava Valley). In October 1964 Sava flooded Zagreb almost to the center, causing heavy damages and human casualties, after which high s were built. In 1981 and April 2006, the Sava flooded lower parts of Belgrade. In 1977 & 1980 both federal and inter-republican agreements were signed about Sava's regulation, which were supposed to regulate its waters to prevent flooding, build new power stations, establish full navigation to Zagreb and ecologically protect its waters, with the final deadline being the year 2000. However, not much was done and Yugoslavia itself broke up in 1991.

East of , the Sava flows through a 90 km long gorge and afterwards the . As the receded, the Sava grew longer and longer, carving the Sava Trench ("Savski rov") through which it flows to the east. Together with lower courses of Bosnian rivers which became its tributaries, it created huge floodplains. Becoming wide (at its 680 m wide, while on its mouth only 280 m), the Sava begins to meander and in history changed course many times, being pushed by the gentle slope of the Pannonian bed to the south and by the force of its many right tributaries to the north. Old riverbeds turned into swamps and ponds known as "mrtvaja" (dead water) and "starača" (old water) in Serbian. The best known is one of the biggest ponds in Serbia and one of the biggest wild birds reservation areas in Europe, .

Right tributaries: in Slovenia: Sora, , Mirna and Krka; in Croatia: Kupa and Sunja; on Croatian-Bosnian border: Una; in Bosnia: , Vrbas, , Bosna, , , and ; On Bosnian-Serbian border: ; in Serbia: Jerez, Kolubara and ;

Left tributaries: in Slovenia: , and ; on Slovenian-Croatian border: Sotla/Sutla; in Croatia: and ; in Serbia: Bosut;

The Sava connects three European capitals: Ljubljana in Slovenia, Zagreb in Croatia and Belgrade in Serbia. Even though Ljubljana was built on Sava's tributary Ljubljanica, as the city grew bigger it included existing villages on Sava, like or Zalog, so the Sava now flows through Ljubljana's outskirts (in the same way grew over its principal river and urbanized areas around much longer river Bosna to the west). In both Zagreb and Belgrade, it divides old and new parts of the cities (Zagreb-Novi Zagreb, Belgrade-Novi Beograd). After Ljubljana, the Sava flows through and the highly industrialized region of Zasavje, including the cities of , and , continuing past the important railway junction of , and on to , , , and after which it crosses into Croatia. Passing through , it continues through on the mouth of Kupa river, and , where it forms the border between Bosnia and Hercegovina and Croatia, with many dual settlements on both sides of the border: /, /, /, /, /, / and Brčko/, soon after which it enters Serbia, where important places are: , , , dn|Klenak and Šabac. Then it flows through the Belgrade suburbs of , , and until it finally empties into the Danube in .

The Sava is navigable for 593 km, from its confluence with the Danube until the mouth of the Kupa at . Smaller crafts can navigate further upstream until , but there are plans of dredging it to become fully navigable.

The Sava Valley is also a natural route for land traffic, which includes the railway and highway Belgrade-Zagreb and routes of oil and gas pipelines from Croatia to Serbia. As a result of all this traffic and densely populated and industrialized areas it flows through, the river is very polluted east of Sisak and not much has been done to improve its conditions.

"" ( _en. Baptism at Savica) is a heroic epic poem written by the most influential Slovenian poet .

Even though name "Sava" became very common among (and not only South) Slavs, especially as a form of personal name, either male or female, and got a 'Slavic tone', the river's name is not Slavic but Celtic and Roman in origin, who called it "Savus". The old associated their river goddess with the river Savus.

According to some, the Sava represents the north-western boundary of the . With the changes of the political climate, the boundary also changed. In Yugoslav times it was considered that the whole Sava is the border (thus promoting mutuality among different Yugoslav nations), which placed even parts of ( area) as a part of the Balkan peninsula.Fact|date=September 2007 After splitting from Yugoslavia, the border was set by some to be the Sava-Kupa line (Kupa forms a part of southern Slovenian border, with Croatia), and then to the ; placing Belgrade in the Balkans, but Zagreb and Ljubljana outside the Balkans.