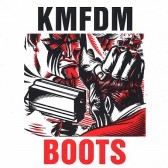 *A shortened clip from the beginning of "Back in the U.S.S.A." is used as the intro on the album "" (which was released one month later to the day) in the initial track "Attak/Reload".