The squadron is famous for Operation Jericho: on 18 February 1944, the crews of de Havilland Mosquitoes breached the walls of a Gestapo prison at Amiens, France, allowing members of the French Resistance to escape.

No. 21 Squadron Royal Flying Corps was formed at Netheravon on 23 July 1915 equipped with the Royal Aircraft Factory R.E.7. After six-months training the squadron was sent to the France in January 1916.[1] The main role for its R.E.7s was reconnaissance,[1] while it also operated small numbers of Bristol Scout Ds[2] and a single Martinsyde G.100 as escort fighters.[3] Although the R.E.7 was badly underpowered, 21 Squadron used its R.E.7s as bombers during the Battle of the Somme,[4] being the first Squadron to drop 336 lb (153 kg bombs.[5]

It discarded its R.E.7s in August 1916, replacing them by single seat Royal Aircraft Factory B.E.12s.[6] These were used as bombers, and despite being almost useless at the role,[1] as fighters.[5] In February 1917, it re-equpped again, receiving the R.E.8 and gave a good account of itself in the Corps Reconnaissance role.[1] On 7 June 1917, during the opening day of the Battle of Messines, its artillery spotting was responsible on one day for putting 72 German batteries out of action,[7] leading to it being described by General Trenchard, the commander of the Royal Flying Corps in France as "the best artillery squadron in France".[5] In April 1918, 21 Squadron were based at RAF Saint Inglevert.[8] After the end of the war the squadron handed over its aircraft to 13 Squadron and was disbanded on 1 October 1919.

The squadron was reformed on 3 December 1935 at RAF Bircham Newton as a light bomber squadron equipped with the Hawker Hind biplane. By August 1938 it began to receive the more modern Bristol Blenheim monoplane.[1] Due to conversion training the squadron did not get involved in the war until May 1940 when it began daylight attacks on advancing German columns in the Low Countries and France. The squadron operated from Scotland to attack German shipping of the coast of Norway. Back in Norfolk the squadron began regular low-level attacks on enemy shipping. At then end of 1941 the squadron moved to Malta to attack Italian shipping. The squadron was disbanded in Malta on 14 March 1942. 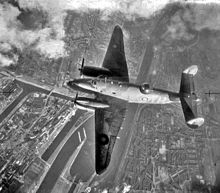 On the same day a new 21 Squadron was formed at RAF Bodney still with the Blenheim. After a few months the squadron re-equipped with the Lockheed Ventura. It was the first RAF squadron to use the Ventura and was not operational until 6 December when it attacked the Philips works at Eindhoven. The aircraft was never really suitable for the squadrons activities and they were replaced in 1943 with the Mosquito. The squadron turned to night raids on continental Europe, it also carried precision daylight raids including a notable attack on Gestapo headquarters in Norway and involvement in Operation Jericho.

During the invasion the Squadron was flying night intruder attacks against German targets. The Squadron moved to RAF Gutersloh in December 1944. It provided a courier services between Blackbushe and Nuremberg in support of the Nuremberg Trials before it was disbanded on 7 November 1947.

On 21 September 1953 the Squadron was reformed at RAF Scampton as a bomber unit with the English Electric Canberra. It was involved in many overseas detachment and was part of force involved in Suez operation of 1956. It was disbanded on 30 June 1957 at RAF Waddington.

On the 1 October 1958 542 Squadron was re-numbered as 21 Squadron with the Canberra B6. It was detached to Australia in support of the trials of nuclear weapons. When the tests were completed the squadron disbanded on 15 January 1959.

Formed again on 1 May 1959 at RAF Benson. This was a completely different role for the squadron. It was equipped with the Scottish Aviation Twin Pioneer as a light transport squadron. It operated in Kenya and Aden in support of the Army. With the withdrawal of British forces from Aden the squadron was disbanded on 9 September 1967.

The squadrons last formation was on 3 February 1969, when the Western Communications Squadron was re-designated at RAF Andover. It provided transport for senior officers in the western part of the United Kingdom using the Dove and Pembroke. It was disbanded following defence cuts on 31 March 1976.