Nauman studied mathematics and physics at the University of Wisconsin–Madison (1960–64), and art with William T. Wiley and Robert Arneson at the University of California, Davis (1965–6). In 1964 he gave up painting to dedicate himself to sculpture, performance and cinema collaborations with William Allan and Robert Nelson. He worked as an assistant to Wayne Thiebaud. Upon graduation (MFA, 1966), he taught at the San Francisco Art Institute from 1966 to 1968, and at the University of California at Irvine in 1970. In 1968 he met the singer and performance artist Meredith Monk and signed with the dealer Leo Castelli. Nauman moved from Northern California to Pasadena in 1969. In 1979, Nauman further moved to New Mexico where he continues to work and live along with his wife, the painter Susan Rothenberg.

Confronted with “What to do?” in his studio soon after graduating, Nauman had the simple but profound realization that “If I was an artist and I was in the studio, then whatever I was doing in the studio must be art. At this point art became more of an activity and less of a product.”[1] Between 1966 and 1970 he made several videos, in which he used his body to explore the potentials of art and the role of the artist, and to investigate psychological states and behavioural codes. Much of his work is characterized by an interest in language, often manifesting itself in a playful, mischievous manner. For example, the neon Run From Fear- Fun From Rear, or the photograph Bound To Fail, which literalizes the title phrase and shows the artist's arms tied behind his back. There are however, very serious concerns at the heart of Nauman's practice. He seems to be fascinated by the nature of communication and language's inherent problems, as well as the role of the artist as supposed communicator and manipulator of visual symbols.

Nauman began in the 1960s with exhibitions at Nick Wilder’s gallery in Los Angeles and in New York at Leo Castelli in 1968 along with early solo shows at the Los Angeles County Museum of Art and the Whitney Museum in 1972. Through most of his midcareer until the early 1980s he flew just below the radar of art market experts.[2]

His Self Portrait as a Fountain (1966) shows the artist spouting a stream of water from his mouth. At the end of the 1960s, Nauman began constructing claustrophobic and enclosed corridors and rooms that could be entered by visitors and which evoked the experience of being locked in and of being abandoned. A series of works inspired by one of the artist's dreams was brought together under the title of Dream Passage and created in 1983, 1984, and 1988.[3] In his installation Changing Light Corridor with Rooms (1971), a long corridor is shrouded in darkness, whilst two rooms on either side are illuminated by bulbs that are timed to flash at different rates.[4]

In 1966, the Nicholas Wilder Gallery, Los Angeles, held Nauman’s first solo exhibition of fibreglass sculptures just before the artist received his master's degree. In 1968, the Leo Castelli Gallery, New York, and the Galerie Konrad Fischer, Düsseldorf, initiated a long series of solo shows. Also in 1968, he was invited for the first time to participate in Documenta 4 in Kassel, and received a grant from the National Endowment for the Arts that enabled him to work in New York for one year. As early as 1972, the Los Angeles County Museum of Art and Marcia Tucker at the Whitney Museum of American Art, New York, organized the first solo museum exhibition of the artist’s work, which traveled in Europe and the United States. A major retrospective was held at the Kröller-Müller Museum, Otterlo, and the Staatliche Kunsthalle Baden-Baden, in 1981. Since the mid-1980s, primarily working with sculpture and video, he has developed disturbing psychological and physical themes incorporating images of animal and human body parts. Nauman retrospective was organized by the Walker Art Center, Minneapolis, and traveled to many venues throughout America and Europe from 1993 to 1995. In 1997, the Kunstmuseum Wolfsburg mounted another major retrospective, which toured the Centre Georges Pompidou in Paris, Hayward Gallery in London and Nykytaiteen Museo in Helsinki. Since then, Nauman has had major solo exhibitions at Dia Art Foundation (2002), Deutsche Guggenheim in Berlin (2003), Tate Modern (2004), Scottsdale Museum of Contemporary Art (2005), Tate Liverpool (2006), Milwaukee Art Museum (2006), Berkeley Art Museum and Pacific Film Archive (2007), and Hamburger Bahnhof (2010).[5]

Nauman's work is in the collections of the Kunstmuseum Basel; the Solomon R. Guggenheim Museum and the Museum of Modern Art in New York; the Hirshhorn Museum and Sculpture Garden in Washington, DC; and the Tate Modern in London among many others. 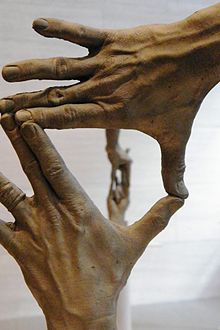 In 1993, Nauman received the Wolf Prize in Arts (an Israeli award) for his distinguished work as a sculptor and his extraordinary contribution to twentieth-century art. In 1999, he received the Golden Lion of the Venice Biennale. in 2004 he received the Praemium Imperiale for sculpture. That same year he created his work Raw Materials specifically for display at the Tate Modern. Artfacts.net ranked Nauman as the number one among living artist in 2006, followed by Gerhard Richter and Robert Rauschenberg.[6] Time Magazine named Nauman one of their 100 most influential people in 2004.

On January 25, 2008, the United States Bureau of Educational and Cultural Affairs (ECA) announced the selection of Bruce Nauman as the American representative to the 2009 Venice Biennale where he won the prestigious Golden Lion.[7]

He holds honorary Doctor of Fine Arts degrees from the San Francisco Art Institute and the California Institute of the Arts.

Some of his best-known works include: