The Oregon State Beavers football team represents Oregon State University (based in Corvallis, Oregon) in NCAA Division I-A college football. The team first fielded an organized football team in 1893 and is currently a member of the Pacific-12 Conference. The head coach is Mike Riley, with Danny Langsdorf as the offensive coordinator and Mark Banker as the defensive coordinator. Their home games are played at Reser Stadium in Corvallis, Oregon.

Oregon State's first season of football was in 1893. At that time, Oregon State was known as State Agricultural College, or SAC. William H. Bloss, son of SAC's school president, was the school's first coach, as well as the quarterback of the 1893 team.[1]

The original "stadium" that SAC played its first games on was an open grass lot with a fence around its perimeter. The field ran east and west. In 1896 or 1897, bleachers were constructed for the south side, which was designated the home team's side, and then sometime around 1899-1901, bleachers were built for the visitors on the north side of the field. It was known as College Field on Lower Campus.[2]

The first game was played on November 11, 1893 at 2:00pm at College Field on Lower Campus against Albany College. Over 500 spectators who paid a dime admission cheered on SAC to 62-0 win, a blowout by today's standards but even worse considering touchdowns were only worth four points at the time. Brady F. Burnett scored Oregon State's first touchdown in school history on a fumble return.[1] 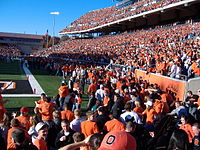 Oregon State's primary rival is the University of Oregon. The two schools enjoy a fierce and long-standing rivalry due to the proximity of the two campuses. The University of Oregon is located in Eugene, Oregon, about 40 miles south of Corvallis. The teams first matched up on the gridiron in 1894 and have been playing each other almost every year since. The rivalry game between the two schools is called the "Civil War" and is typically played the last game of each season. They have played each other 113 times which makes it the seventh-oldest college football rivalry game.

The two other Pacific Northwest Pac-12 schools are also rivals. The Washington Huskies and the Washington State Cougars are within driving distance of Corvallis, so a large number of the road team's fans typically travel to each game. The Beavers have been playing the Huskies since 1897 and the Cougars since 1903. It is notable that the Oregon State-Washington rivalry predates the first Apple Cup and Oregon-Washington games, which were initiated in 1900.

The rivalry between the four Pacific Northwest Pac-12 schools is occasionally called the "Northwest Championship". Former Washington Huskies coach Rick Neuheisel coined the phrase to describe the four-team competition during the 2002 season. Since 2002, Oregon State has won the "Northwest Championship" two times (2004, 2007) by beating all three of its rivals in the same season.

Oregon State has played in 15 postseason bowl games.[5] They have also played in the Mirage Bowl, but this was a regular season game and a "bowl" in name only, not a post-season invitational bowl game.[6] This does not include an invitation to play in the Gotham Bowl in 1960, when no opponent was able to be found for them. The Beavers are 10-5 in bowl game appearances.

Beavers in the NFL

Beavers in the CFL

Beavers in the UFL