Douglas-fir
This article is about Pseudotsuga. For the North American species, see Pseudotsuga menziesii and Rocky Mountain Douglas-fir. For the ship, see Oregon Pine (schooner).

/ˌsjuːdoʊˈtsuːɡə/)[1] in the family Pinaceae. There are five species, two in western North America, one in Mexico, and two in eastern Asia. Nineteenth-century botanists had problems in classifying Douglas-firs, due to the species' similarity to various other conifers better known at the time; they have at times been classified in Pinus, Picea, Abies, Tsuga, and even Sequoia. Because of their distinctive cones, Douglas-firs were finally placed in the new genus Pseudotsuga (meaning "false hemlock") by the French botanist Carrière in 1867. The genus name has also been hyphenated as Pseudo-tsuga.

The common name Douglas-fir honours David Douglas, the Scottish botanist who first introduced P. menziesii into cultivation at Scone Palace in 1827.[2] Douglas is known for introducing many North American native conifers to Europe. The hyphen in the name indicates that Douglas-firs are not true firs, not being members of the genus Abies.[3]

Douglas-firs are medium-size to extremely large evergreen trees, 20–120 metres (70–390 ft) tall (although only Coast Douglas-firs reach such great height).[4] The leaves are flat, soft, linear, and completely encircle the branches (this can be useful in distinguishing it from other species), generally resembling those of the firs. The female cones are pendulous, with persistent scales (unlike true firs), and are distinctive in having a long tridentine (three-pointed) bract that protrudes prominently above each scale.

Uniquely among conifers, the Douglas-fir has cones with 3-lobed bracts sticking out between the scales. The cones hang down rather than sticking up as in true firs. The needles are 2–4 centimetres (0.8–1.6 in) long and occur singly rather than in fascicles.

In Australia and New Zealand, the common Douglas-fir is known as "Oregon" timber.

Coast Douglas-fir has attained heights of 393 feet (120 m). That was the estimated height of the tallest conifer ever well-documented, the Mineral Tree (Mineral, Washington), measured in 1924 by Dr. Richard E. McArdle,[7] former chief of the U.S. Forest Service.[8] The volume of that tree was 515 cubic metres (18,190 cu ft). The tallest living individual is the Brummitt (Doerner) Fir in Coos County, Oregon, 99.4 metres (326 ft) tall.[9] Only Coast Redwood[10] reach greater heights based on current knowledge of living trees. At Quinault, Washington, is found a collection of the largest Douglas-firs in one area. Quinault Rain Forest hosts the most of the top ten known largest Douglas-firs. 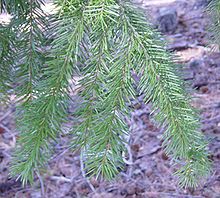 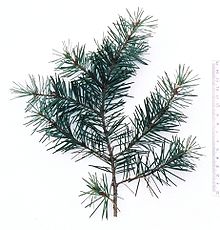 The buds of a Coast Douglas-fir

All of the other species are of restricted range and little-known outside of their respective native environments, and even there are often rare and only of very scattered occurrence in mixed forests; all those are listed as being of unfavourable conservation status.

Douglas-fir wood is used for structural applications that are required to withstand high loads. It is used extensively in the construction industry. Other examples include its use for homebuilt aircraft such as the RJ.03 IBIS canard. Very often, these aircraft were designed to utilize Sitka spruce, which is becoming increasingly difficult to source in aviation quality grades.

Douglas-fir is one of the most commonly marketed Christmas tree species in the United States, where they are sold alongside firs like Noble Fir and Grand Fir. Douglas-fir Christmas trees are usually trimmed to a near perfect cone instead of left to grow naturally like Noble and Grand firs.[14]

Douglas-firs are used as food plants by the larvae of some Lepidoptera species, including Autumnal Moth, Bordered White, The Engrailed, Pine Beauty and Turnip Moth. The gelechiids Chionodes abella and Chionodes periculella and the tortrix moth Cydia illutana have been specifically recorded on P. menziesii.

A California Native American myth explains that each three-ended bract is the tail and two tiny legs of a mouse that hid inside the scales of the tree's cones during forest fires, and the tree was kind enough to be its enduring sanctuary.

In the American television series Twin Peaks, primary character Special Agent Dale Cooper displays a fascination with the firs upon arriving in the titular town.