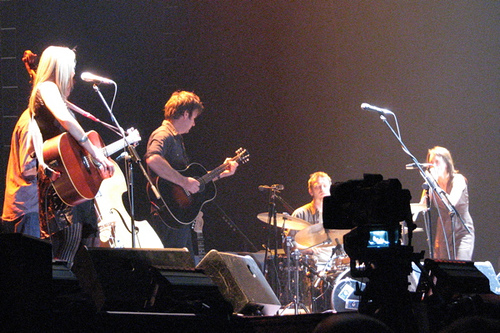 The Waifs own , an independent label with John Butler of The John Butler Trio, and their records are released in Australia under that label. [cite web|url=http://www.jarrahrecords.com/|title=Jarrah Records Webpage|year=2004|accessdate=2008-04-28]

The Waifs formed in 1992. Donna Simpson and Vikki Simpson (now Vikki Thorn), sisters from Albany were touring as a duo called Colours. They met up with Josh Cunningham while playing in Broome. The band changed its name to the Waifs a year later and commenced touring extensively in Australia. [cite web|url=http://www.cmt.com/artists/az/waifs/bio.jhtml|title=Country Music Television - Waifs Biography|year=2008|accessdate=2008-04-28]

In 1996, the band recorded their first self-titled album "The Waifs" with Jen Anderson and of folk rock band and commenced a year long tour. The second album "" was recorded in and was supported by another tour.

The band released its third album "Sink or Swim" in 2000 and started to play at folk festivals in Canada and the US. In 2001, the band made its first appearance at the Newport Folk Festival; the acclaiming them as "the darlings of [that] year's festival". The growing international reputation of the band led to the release of "Sink or Swim" in the United States in 2002.

The success of the "London Still" EP sparked the success of the fourth Waifs album "Up All Night" in Australia. Released in January 2003, it debuted in the Australian charts at number 3. The album was certified gold 4 weeks after release, went platinum in October 2003 and double platinum in February 2004. The "Lighthouse EP" was released in April 2003 as a second single.

Vikki Simpson told the "Sydney Morning Herald" on , that the success of the album had taken the band by surprise. "We were nonchalant about releasing albums. We'd released three already and had learned not to put too much hope behind an album because you're usually disappointed. So it was a surprise, but we took it in our stride. It was all very exciting but it didn't seem real to us because it was such a new experience."

The band supported Bob Dylan on his Australian tour in March 2003. Dylan was so impressed by the band that he offered them the support slot on his tour of North America in 2003. This was a great thrill for the group as the band started off playing Bob Dylan tunes before they started writing their own songs. In 2003, the band also participated in , an Australian traveling .

The Waifs won ARIA Awards for Best Roots and Blues Album and Best Independent Album in the 2003 awards. In addition, they won the awards for Best Produced Album and Best Engineered Album. Chris Thompson was the Producer and Engineer for "Up All Night", as well as singles "London Still", "Bridal Train" and the live double album "A Brief History...". [cite web|url=http://www.smh.com.au/news/gig-reviews/the-waifs/2007/10/05/1191091320389.html|title=Sydney Morning Herald - The Waifs|year=2007|accessdate=2008-04-28]

The "" was released in March 2004 and made the Australian Top 50 singles charts in April 2004. The title track tells the story of Vikki and Donna Simpson's grandmother, a of a sailor in the US Navy. She boarded the so-called "Bridal Train" between Perth, , and Sydney to travel to San Francisco to meet up again with her husband. The Waifs finally released a highly awaited double live album in November 2004 which debuted in the top 30 of the Australia album charts. Vikki Simpson gave birth to a baby boy, Noah, on Saturday , .

After the Asian , The Waifs joined a cast of Australian artists to perform at the concert in Sydney to help raise funds for the relief effort. [cite web|url=http://www.waveaid.com.au/about.html|title=Waveaid - The Tsunami relief concert|year=2005|accessdate=2008-04-28]

In 2005 The Waifs continued with their well earned rest and commenting on a new album said "We won't be going into the studio any time soon. Our collective focus is too outside of music and career right now to put out an album."

The Waifs also announced via their that "there are some things in thepipeline. First of all a new record to be recorded sometime in the new year." On , , the Waifs issued a press release on their website with information about the new album:

In May 2007, Donna Simpson announced that the title of the band's newest album would be . The album was released on , in Australia. The album debuted and peaked at #2 on the ARIA Album Chart in September 2007.

The Waifs performed across Australia in the spring of 2007 on the "SunDirtWater" tour to many sold out venues. The tour started on in Broome, and ended on at Legs 11, a concert for breast cancer research. In November, 2007, The Waifs announced that they would be collaborating with the in the "Union of Soul Tour" of January, 2008. The short tour had five concerts, with shows taking place in various cities across including Denmark, Margaret River, Swan Valley, and two gigs at the .