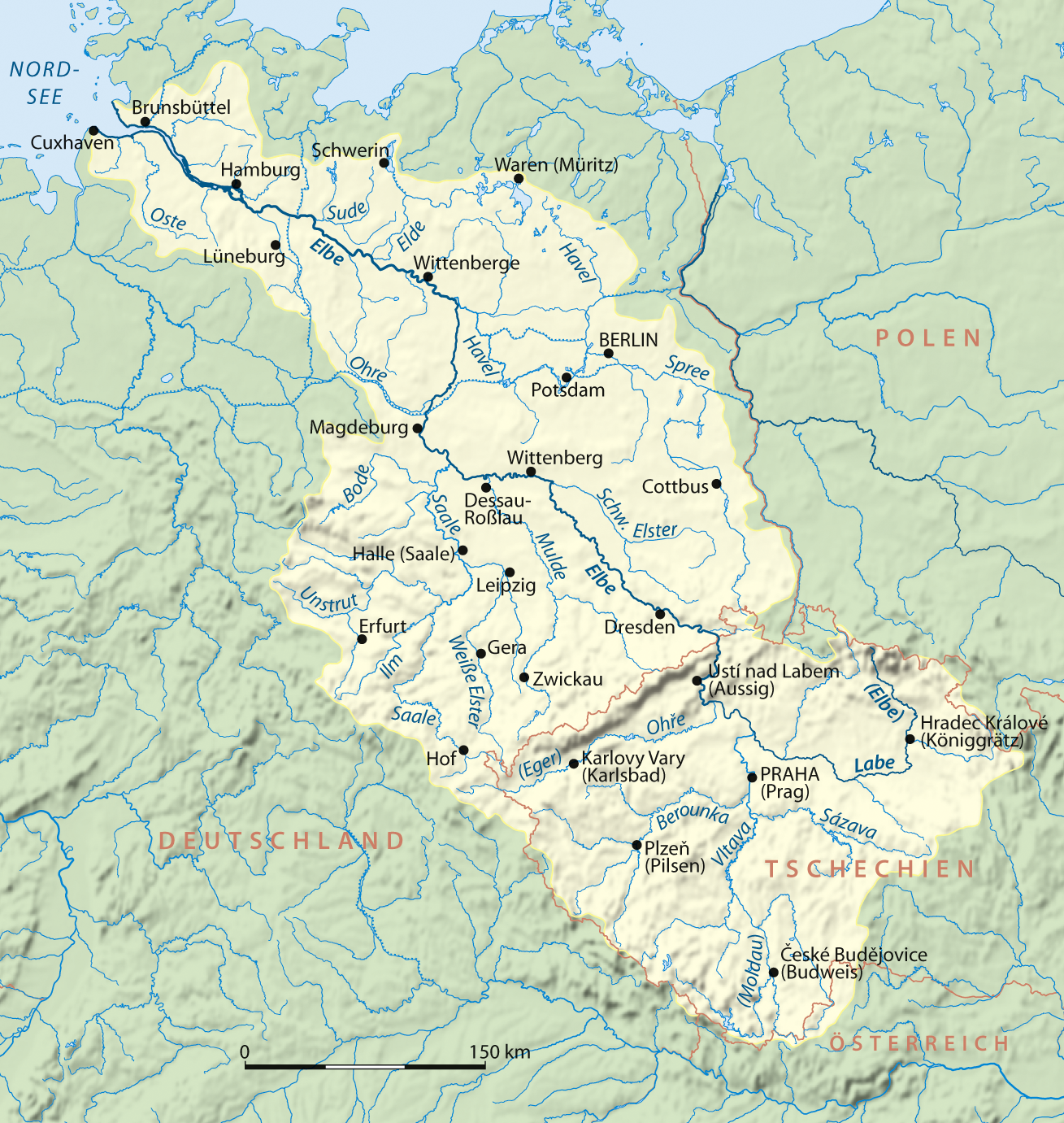 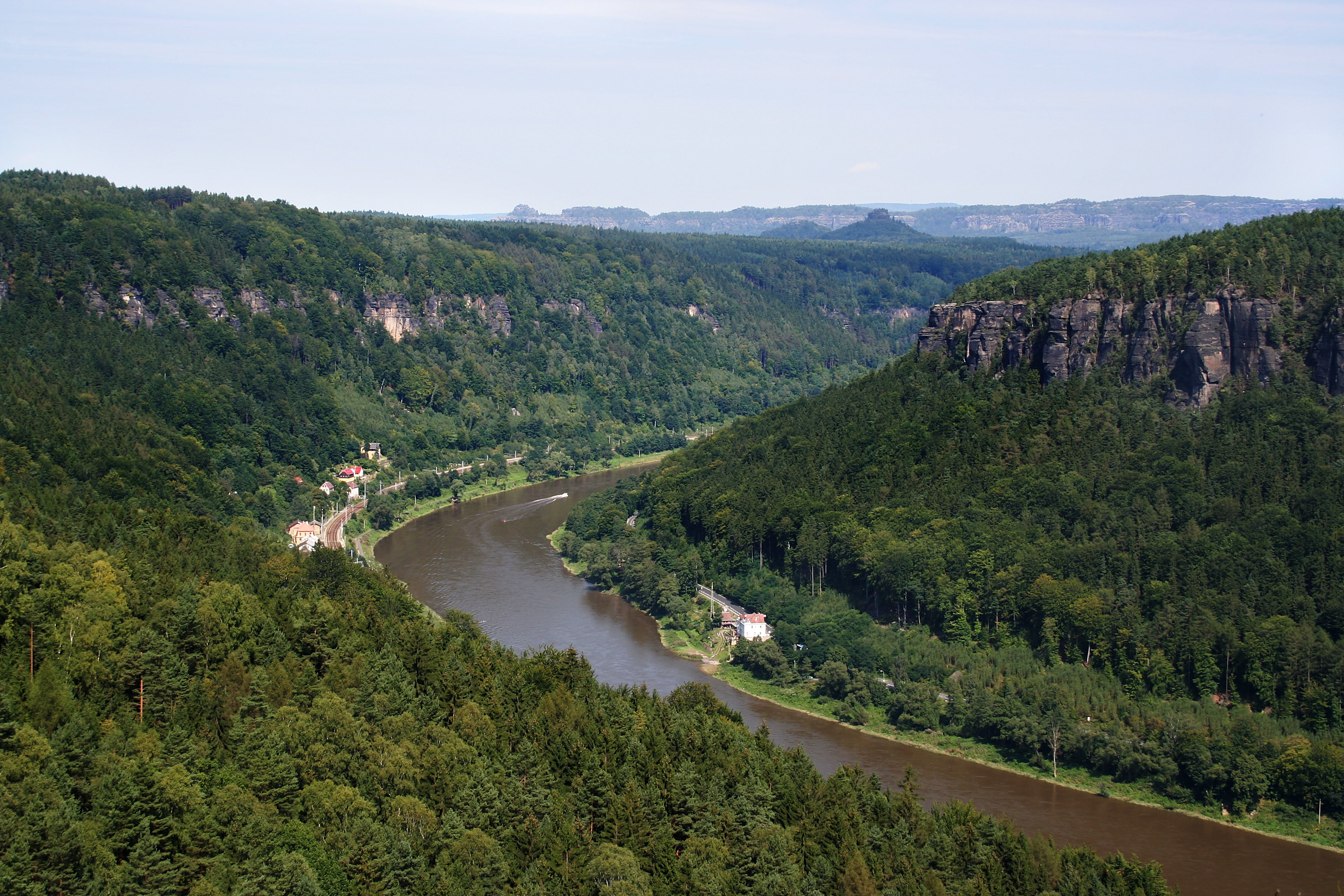 image_size =
image_caption = The Labe near Děčín, Czech RepublicThe Elbe (Audio-cs|Labe|Cs-Labe.ogg; _de. die Elbe; : "de Ilv") is one of the major s of . It originates in the northwestern before traversing much of and flowing into the . Its total length has been given as convert|1091|km|mi|0.

The Elbe rises at an elevation of about convert|1400|m|ft|0 in the Krkonoše (also known as "Giant Mountains" or in German as "Riesengebirge") on the north west borders of the Czech Republic. Of the numerous small streams whose waters compose the infant river, the most important is the , or White Elbe. After plunging down the convert|60|m|ft|0 of the , the latter stream unites with the steeply torrential , and thereafter the united stream of the Elbe pursues a southerly course, emerging from the mountain glens at and continuing on to , where it turns sharply to the west. At some convert|43|km|mi|0 further on, it bends gradually towards the north-west. At the village of , a little above it picks up the Jizera.

At its stream is more than doubled in volume by the , or Moldau, a river which winds northwards through . Although upstream from the Vltava is longer (434 km vs. 294), has larger discharge and larger , due historical reasons (at the the meets the Elbe at almost a right angle, so it appears as a tributary) river continues as Elbe.

Some distance lower down, at , the waters of the Elbe are tinted by the reddish (Eger). Thus augmented, and swollen into a stream convert|140|m|ft|0 wide, the Elbe carves a path through the basaltic mass of the , churning its way through a deep, narrow rocky gorge. Shortly after crossing the Czech-German frontier, and passing through the sandstone defiles of the , the stream assumes a north-westerly direction, which on the whole it preserves right to the North Sea.

The river rolls through and finally, beyond , enters on its long journey across the passing along the former border of , touching , , , , , and on the way, and taking on the waters of the and from the west, and those of the , and from the east. Soon the Elbe reaches , and then passes through until it flows into the North Sea at . Near its mouth it passes , , and the entrance to the .

The Elbe has been navigable by commercial vessels since 1842, and provides important trade links as far inland as . The river is linked by s to the industrial areas of Germany and to . The links the Elbe to the , as does the , whose western entrance is near the mouth of the Elbe.

Before Germany was reunited, waterway transport in Western Germany was hindered by the fact that inland navigation to Hamburg had to pass through the German Democratic Republic. The Elbe Seitenkanal (Elbe Lateral Canal) was built between the Mittellandkanal and the lower Elbe to restore this connection. When the two nations were reunited, works began to improve and restore the original links: the Elbe Canal Bridge near Magdeburg now allows large barges to cross the Elbe without having to enter the river. The often low water levels of the Elbe do not hinder navigation to Berlin any longer. (Source: [http://www.noorderSoft.com/indexen.html NoorderSoft Waterways Database] )

The Elbe was recorded by as "Albis" (Germanic for "river", see below) in Magna with its source in the "Asciburgis" mountains (Krkonoše, Riesengebirge or Giant Mountains), where the Germanic "" lived.

The Elbe has long been an important delineator of European geography. The Romans knew the river as the Albis; however, they only attempted once to move the Eastern border of their empire forward from the to the Elbe, and this attempt failed in the in 9 AD, after which they never seriously tried again. In the it formed the eastern limit of the Empire of . The river's navigable sections were also essential to the success of the and much trade was carried on its waters.

In 1945, as was drawing to a close, was caught between the armies of the western Allies advancing from the west and the advancing from the east. On , these two forces linked up near Torgau, on the Elbe. The event was marked as . After the war, the Elbe formed part of the border between East and .

According to Russian accounts, In April, 1970, when the facility in was being transferred to the East German government, the remains of , , , and the Goebbels' six children were reportedly exhumed, thoroughly cremated, and the ashes finally dumped unceremoniously into the Elbe.