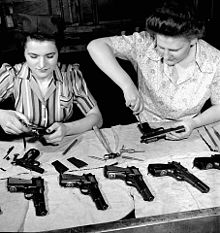 The arms industry is a global industry and business which manufactures and sells weapons and military technology and equipment. It comprises government and commercial industry involved in research, development, production, and service of military material, equipment and facilities. Arms producing companies, also referred to as defence companies or military industry, produce arms mainly for the armed forces of states. Departments of government also operate in the arms industry, buying and selling weapons, munitions and other military items. Products include guns, ammunition, missiles, military aircraft, military vehicles, ships, electronic systems, and more. The arms industry also conducts significant research and development.

It is estimated that yearly, over 1.5 trillion dollars are spent on military expenditures worldwide (2.7% of World GDP).[1] This represents a decline from 1990 when military expenditures made up 4% of world GDP. Part of this goes to the procurement of military hardware and services from the military industry. The combined arms sales of the top 100 largest arms producing companies amounted to an estimated $315 billion in 2006.[2] In 2004 over $30 billion were spent in the international arms trade (a figure that excludes domestic sales of arms).[3] The arms trade has also been one of the sectors impacted by the credit crunch, with total deal value in the market halving from US$32.9bn to US$14.3bn in 2008.[4] Many industrialized countries have a domestic arms industry to supply their own military forces. Some countries also have a substantial legal or illegal domestic trade in weapons for use by its citizens. An illegal trade in small arms is prevalent in many countries and regions affected by political instability.

Contracts to supply a given country's military are awarded by the government, making arms contracts of substantial political importance. The link between politics and the arms trade can result in the development of what US President Dwight D. Eisenhower described as a military-industrial-congressional complex, where the armed forces, commerce, and politics become closely linked. The European defence procurement is more or less analogous to the U.S. military-industrial complex. Various corporations, some publicly held, others private, bid for these contracts, which are often worth many billions of dollars. Sometimes, such as the contract for the new Joint Strike Fighter, a competitive tendering process takes place, where the decision is made on the merits of the design submitted by the companies involved. Other times, no bidding or competition takes place.

In the Cold War Era, arms exports were used by both the Soviet Union and the United States to influence their standings in other countries, particularly Third World Countries.

The AK series of weapons have been produced in greater numbers than any other firearm and have been used in conflicts all over the world.

This category includes everything from light arms to heavy artillery, and the majority of producers are small. Many are located in Third World countries. International trade in handguns, machine guns, tanks, armored personnel carriers and other relatively inexpensive weapons is substantial. There is relatively little regulation at the international level, and as a result, many weapons fall into the hands of rebel forces, terrorists, or regimes under sanctions.[5]

The Control Arms Campaign, founded by Amnesty International, Oxfam, and the International Action Network on Small Arms, estimated in 2003 that there are over 639 million small arms in circulation, and that over 1,135 companies based in more than 98 different countries manufacture small arms as well as their various components and ammunition.[6] 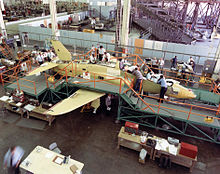 Encompassing military aircraft (both land-based and naval aviation), conventional missiles, and military satellites, this is the most technologically advanced sector of the market. It is also the least competitive from an economic standpoint, with a handful of companies dominating the entire market. The top clients and major producers are virtually all located in the western world, with the United States easily in first place. Prominent aerospace firms include Dassault Aviation, Sukhoi, EADS, Finmeccanica, Thales Group, Lockheed Martin, Boeing, and BAE Systems. There are also several multinational consortia mostly involved in the manufacturing of fighter jets, such as the Eurofighter. The largest military contract in history, signed in October 2001, involved the development of the Joint Strike Fighter.[5] 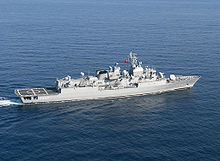 Naval systems include warships and the equipment on board, such as electronics, HVAC, fire suppression, and weapons

All of the world's major powers maintain substantial maritime forces to provide a global presence, with the largest nations possessing aircraft carriers, nuclear submarines and advanced anti-air defense systems. The vast majority of military ships are conventionally powered, but some are nuclear-powered. There is also a large global market in second-hand naval vessels, generally purchased by developing countries from Western governments.[5]

This is a list of the ten countries with the highest defence budgets for the year 2010, which is $1.22 trillion or 76% of total world expenditures. The information is from the Stockholm International Peace Research Institute.[7][8] Total world spending amounted to $1.63 trillion USD in 2010.

The unit in this table are so-called trend indicator values expressed in millions of US dollars at 1990s prices. These values do not represent real financial flows but are a crude instrument to estimate volumes of arms transfers, regardless of the contracted prices, which can be as low as zero in the case of military aid. Ordered by descending 2000-2010 values. The information is from the Stockholm International Peace Research Institute.[9]

The information is also from the Stockholm International Peace Research Institute or from the national defence commissions where available and is updated at least once a year. 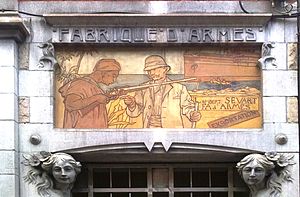 Next to SIPRI there are several other sources that provide data on international transfers of arms. These include national reports by national governments about arms exports, the UN register on conventional arms and an annual publication by the US Congressional Research Service that includes data on arms exports to developing countries as compiled by US intelligence agencies. A list of such sources can be found at the SIPRI website. [1] Due to the different methodologies and definitions used different sources often provide significantly different data. For example, according to Statistisk sentralbyrå (Norway state statistics), Norway exports a greater value (in USD) of arms than many of the nations listed above.

Some of the differences are possibly due to deliberate over- or under-reporting by some of the sources. Governments may claim high arms exports as part of their role in marketing efforts of their national arms industry or they may claim low arms exports in order to be perceived as a responsible international actor.

As of 2008 Britain has become the worlds leading developer of arms with British company BAE Systems.[2] Defence group BAE Systems is the first company outside the U.S. to reach the top position,thanks to a deal with the Pentagon for mine-resistant vehicles to be used in Iraq and Afghanistan. According to the Stockholm International Peace Research Institute, a defence think tank, the former British Aerospace group's arms sales are ahead of American market leaders Lockheed Martin and Boeing. The report reveals BAE's U.S. subsidiary was alone responsible for 61.5 per cent of the group's arms sales and around 58.5 per cent of total group sales. This demonstrates BAE's increasing reliance on orders for conventional weapons as the U.S. cuts back on its nuclear arsenal. The British figures were also boosted by orders for Eurofighter Typhoon jets from Saudi Arabia.

The unit in this table are so-called trend indicator values expressed in millions of US dollars. These values do not represent real financial flows but are a crude instrument to estimate volumes of arms transfers, regardless of the contracted prices, which can be as low as zero in the case of military aid.

Private military contractors are private companies that provide logistics, manpower, and other expenditures for a military force.

Oscar Arias Sanchez President of Costa Rica (awarded the Nobel Peace Prize in 1987 for his efforts to end civil wars across Central America through the Esquipulas II Accords) has stated:

The European Council stated to the United Nations General Assembly: