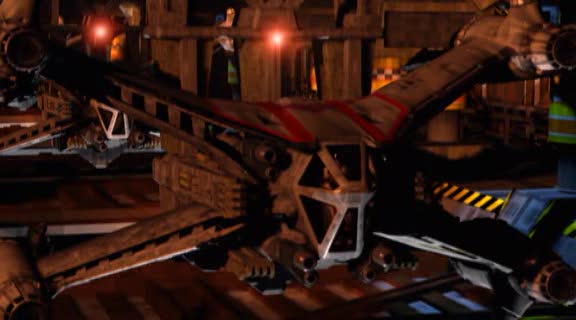 Unlike stereotypical fictional starfighters, the Starfury design owes nothing to the needs of aerodynamic design and is designed solely for space operations. The design consists of eight main thrusters (four forward-facing, four rear-facing) and a number of smaller lateral and vertical attitude thrusters, arranged at the tips of two sets of wings in a "X" configuration, with the cockpit at the center. The Starfury's unique relationship between its and its s enables it to make rapid pivots on its transverse, longitudinal, and normal axes, to bring its weapons to bear on opponents in any direction, without having to change the vehicle's current direction of movement. For instance, in a when a Starfury pilot notices an enemy ship tailing him/her, the pilot can adjust and yaw the fighter 180 degrees (turn it around its vertical axis) so that it can fire back along its flightpath at the pursuing craft, without having had to shake the enemy's pursuit first or alter its own direction of movement. Equally, the Starfury's set of forward-pointed engines allows it to stop extremely rapidly, thus causing a pursuer to overshoot, right into the line of sight of the Starfury's guns. (These maneuvers also reflect "Babylon 5" unusual insistence on modeling accurate , as opposed to the -based maneuvers depicted by such science-fiction staples as "" and "".)

Like most fighter-class ships in the Babylon 5 universe, although they can travel through hyperspace, they cannot generate their own jump points to enter it--they must rely on carrier ships or jumpgates.

Compared to the fighters from the other, older alien races of the Babylon 5 universe, the Starfury is an excellent design. It is faster, more maneuverable and better-armed than the Narn Frazi-Class fighter. Although slower than the Centauri Sentri-Class fighter, the Starfury's thicker armor allows it to survive far more hits than the lightly-armored Sentri. Furthermore, the Starfury's ability to abruptly change direction and speed gives it an advantage over the Sentri. Only the highly advanced Minbari Nial-Class fighter, the Vorlon Fighters, Shadow fighters, or other fighter craft of any of the advanced races are clearly superior to the Starfury.

There are several production models of Starfury in use by the Earth Alliance. They vary in design according to their function.

The most commonly-seen model of Starfury is the SA-23, also known as the Aurora. It is a heavily-armed, one-man space superiority fighter that has been in service for more than 40 years. There are many specific models of SA-23, with a small differences in design. Most common of latest models, SA-23E comes into service at the end of the Minbari War.

Pilots of the Aurora-Class Starfury fly standing up, as this position helps mitigate the negative effects of G-Forces generated from extreme maneuvers, such as black-outs. The pilot controls the fighter from a detachable cockpit module, allowing him to perform an 'ejection' in emergency situations.

A more heavily-armed and armored variant of the Aurora-Class, the Badger Fighter-Bomber is less commonly seen than the standard Aurora-Class Starfury or the newer Thunderbolt-Class. It was most commonly used by Earth Alliance vessels for long-range operations against larger targets.

The newest model of Starfury developed by the Earth Alliance, the SA-32A, or Thunderbolt, is designed as an all-purpose two-crew strike craft. The craft came into service in the late 2250s, and in the early 2260s they almost completely replaced the SA-23 in the first-line units.

Larger but slightly less maneuverable than the Aurora or Badger Starfuries, its most innovative feature is the change of the X configuration of the wings to have a crank shape with horizontal lift surfaces and incorporating four extending airfoils, along with the addition of an aerodynamic elongated nose, making the Thunderbolt the first model of Starfury capable of operating within a planetary atmosphere.

The SA-32A is armed with four linked unidirectional 40 mm pulse cannon and can carry up to ten space-superiority/air-ground missiles. Unlike the Aurora/Badger, the Thunderbolt pilots sit in conventional seats.

The civilian version of the Starfury, it is designed for construction work in space. As such, its two ion engines are positioned so that they are lined up with the cockpit. It also has two large grappler claws. It is often stated that the civilian Fury is actually more agile and more precise than a Starfury.Fact|date=April 2007

In the DVD commentary for the season 2 finale "", Straczynski mentions in passing that his standard response to the question of how fast Starfuries go was "They travel at the speed of "plot"."

approached producer , interested in adapting the design of the Starfury as a model for a forklift to be used in the construction of the . Straczynski agreed, asking only that the name of the resulting craft remain "Starfury." [ J. Michael Straczynski DVD commentary]

* [http://tgm.firstones.com/wiki/Starfury Starfury] at the Babylon 5 wiki.