Although Guillotin did not actually contribute to the machine’s design, it was his name that it would carry throughout history, thanks to a comic song about Guillotin and his proposal which appeared in the Royalist periodical, , shortly after the 1791 debate;

On , the first victim of the device was a named . The crowds marveled at the machine's speed and precision.

The basis for the machine's success was the belief that it was a form of execution, contrasting with the methods used in pre-revolutionary, "" France. In France, before the guillotine, members of the were beheaded with a sword or axe, while commoners were usually hanged, a form of death that could take minutes or longer. Other more gruesome methods of executions were also used, such as the wheel, , etc. In the case of decapitation, it also sometimes took repeated blows to sever the head completely, and it was also very likely for the condemned to slowly bleed to death from their wounds before the head could be severed. The condemned or the family of the condemned would sometimes pay the executioner to ensure that the blade was sharp in order to provide for a quick and relatively painless death.

When Guillotin himself died, it was not on his namesake as legend would have it, but instead of natural causes on , .

The period from June 1793 to July 1794 in France is known as the or simply "the Terror". The upheaval following the overthrow of the , invasion by foreign monarchist powers and the combined to throw the nation into chaos and the government into frenzied paranoia. Most of the democratic reforms of the revolution were suspended and large-scale executions by guillotine began. The first political prisoner to be executed was Collenot d'Angremont of the National Guard, followed soon after by the King's trusted collaborator in his ill-fated attempt to moderate the Revolution, , both in 1792. Former King Louis XVI and Queen were executed in 1793. became one of the most powerful men in the government, and the figure most associated with the Terror. The sentenced thousands to the guillotine. Nobility and commoners, intellectuals, politicians and prostitutes,Fact|date=June 2007 all were liable to be executed on little or no grounds; suspicion of "crimes against liberty" was enough to earn one an appointment with "Madame Guillotine" (also referred to as "The National Razor"). Estimates of the death toll range between 15,000 and 40,000.Fact|date=June 2007 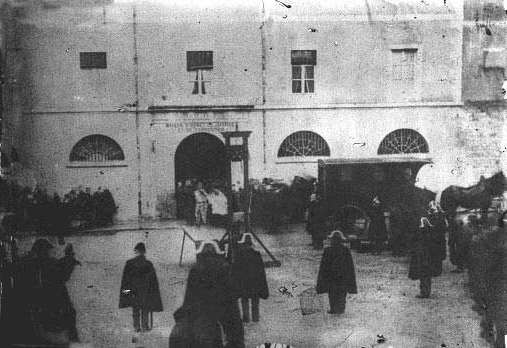 thumb|right|Public_guillotining_in_, 1897.Picture taken on , in front of the jailhouse of Lons-le-Saunier, Jura. The man who was going to be beheaded was Pierre Vaillat, who killed two elder siblings on Christmas day, 1896, in order to rob them and was condemned for his crimes on .] At this time, Paris executions were carried out in the Place de la Revolution (former Place Louis XV and current ) (near the ); the guillotine stood in the corner near the Hôtel Crillon where the statue of Brest can be found today.

For a time, executions by guillotine were a popular entertainment that attracted great crowds of spectators. Vendors would sell programs listing the names of those scheduled to die. Regulars would come day after day and vie for the best seats. Parents would bring their children. By the end of the Terror the crowds had thinned drastically. Excessive repetition had staled even this most grisly of entertainments, and audiences grew bored.

Eventually, the National Convention had enough of the Terror, partially fearing for their own lives, and turned against Maximilien Robespierre. In July 1794 he was arrested and executed in the same fashion as those whom he had condemned. This arguably ended the Terror, as the French expressed their discontent with Robespierre's policy by guillotining him. [cite web
title =The Reign of Terror
work =French Revolution Exhibit
url =http://www.historywiz.com/terror.htm
accessdate = ]

The last "public" guillotining was of , who was convicted of six murders. He was beheaded on , outside the prison Saint-Pierre rue Georges Clémenceau 5 at , which is now the Palais de Justice. The allegedly scandalous behaviour of some of the onlookers on this occasion, and an incorrect assembly of the apparatus, as well as the fact it was secretly filmed, caused the authorities to decide that executions in the future were to take place in the prison courtyard. , the presiding "number one" executioner at this time was variously reported as slow, possibly drunk, and indecisive, certainly a far cry from his well-regarded immediate predecessor Anatole Deibler. He was also prone to arguing with his cousin and "number two" which led to the latter's resignation on two separate occasions, the last involving a fistfight between the pair after an execution.

The guillotine remained the official method of execution in France until France abolished the death penalty in 1981. The last guillotining in France was that of torture-murderer on , .

The guillotine outside France

As has been noted, there were guillotine-like devices in countries other than France before 1792. A number of countries, especially in Europe, continued to employ this method of execution into modern times.

In , , the last beheaded was . Convicted for robbery with murder, he received his punishment on -. During the period - until -, the town of counted 19 beheadings [Gazet van Mechelen, May 8th, 1956]

A notable example is , where the guillotine is known in German as "Fallbeil" ("falling axe"). It has been used in various German states since the 17th century, becoming the usual method of execution in ic times in many parts of Germany. Guillotine and firing squad were the legal methods of execution in (1871-1918) and (1919-1933).

The original German guillotines resembled the French Berger 1872 model but eventually evolved into more specialised machines largely built of metal with a much heavier blade enabling shorter uprights to be used. Accompanied by a more efficient blade recovery system and the eventual removal of the tilting board (or bascule) this allowed a quicker turn-around time between executions, the victim being decapitated either face up or down depending on how the executioner predicted they would react to the sight of the machine. Those deemed likely to struggle were backed up from behind a curtain to shield their view of the device.

In 1933 had a guillotine constructed and tested. He was impressed enough to order 20 more constructed and pressed into immediate service. Nazi records indicate that between 1933 and 1945 16,500 people were executed in Germany by this method. In Nazi Germany beheading by guillotine was the usual method of executing convicted criminals as opposed to political enemies, who were usuallyFact|date=March 2008 either hanged or shot. By the middle of the war, however, policy changed: the six members of the anti-Nazi resistance organisation were beheaded in 1943, as were a hundred or more from that date, including , beheaded in Berlin on . The last execution in Germany, other than in , took place on , when 24-year-old Berthold Wehmeyer was beheaded in prison, , for murder and robbery. When was formed in 1949, its constitution forbade the death penalty; East Germany abolished it in 1987, and in 1968.

From its first use, there has been debate as to whether the guillotine always provided as swift a death as Guillotin hoped. With previous methods of execution, there was little concern about the suffering inflicted. As the guillotine was invented specifically to be "humane", however, the issue was seriously considered. Furthermore, there is the possibility that the very swiftness of the guillotine only prolonged the victim's suffering. The blade cuts quickly enough so that there is relatively little impact on the brain case, and perhaps less likelihood of immediate unconsciousness than with a more violent decapitation, or long-drop .

Audiences to guillotinings told numerous stories of blinking eyelids, speaking, moving eyes, movement of the mouth, even an expression of "unequivocal indignation" on the face of the decapitated when her cheek was slapped. Anatomists and other scientists in several countries have tried to perform more definitive experiments on severed human heads as recently as 1956. Inevitably the evidence is only anecdotal. What appears to be a head responding to the sound of its name, or to the pain of a pinprick, may be only random muscle twitching or automatic reflex action, with no awareness involved. At worst, it seems that the massive drop in cerebral blood pressure would cause a victim to lose consciousness in several seconds. [ [http://tafkac.org/medical/decapitated_head_blinking_more.html Excerpt from British Medical Journal, Vol 294: February, 1987] , quoting "Proges Medical" of , on the subject of research into "living heads".]

The following report was written by a Dr. Beaurieux, who experimented with the head of a condemned prisoner by the name of , on :

Quote|Here, then, is what I was able to note immediately after the decapitation: the eyelids and lips of the guillotined man worked in irregularly rhythmic contractions for about five or six seconds. This phenomenon has been remarked by all those finding themselves in the same conditions as myself for observing what happens after the severing of the neck...

I waited for several seconds. The spasmodic movements ceased. [...] It was then that I called in a strong, sharp voice: 'Languille!' I saw the eyelids slowly lift up, without any spasmodic contractions – I insist advisedly on this peculiarity – but with an even movement, quite distinct and normal, such as happens in everyday life, with people awakened or torn from their thoughts.

Next Languille's eyes very definitely fixed themselves on mine and the pupils focused themselves. I was not, then, dealing with the sort of vague dull look without any expression, that can be observed any day in dying people to whom one speaks: I was dealing with undeniably living eyes which were looking at me. After several seconds, the eyelids closed again [...] .

It was at that point that I called out again and, once more, without any spasm, slowly, the eyelids lifted and undeniably living eyes fixed themselves on mine with perhaps even more penetration than the first time. Then there was a further closing of the eyelids, but now less complete. I attempted the effect of a third call; there was no further movement – and the eyes took on the glazed look which they have in the dead. [cite web
title =Dr. Beaurieux's Report
work =The History of the Guillotine
url =http://www.metaphor.dk/guillotine/Pages/30sec.html
accessdate = ]