A tape head is a type of transducer used in tape recorders to convert electrical signals to magnetic fluctuations and vice versa. 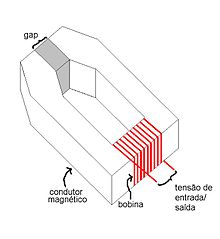 Scheme of a tape head.

The electromagnetic arrangement of a tape head is generally similar for all types, though the physical design varies considerably depending on the application - for example videocassette recorders (VCR) use rotating heads which implement a helical scan, whereas most audio recorders have fixed heads. A head consists of a core of magnetic material arranged into a doughnut shape or toroid, into which a very narrow gap has been let. This gap is filled with a paramagnetic material, such as gold. This forces the magnetic flux out of the gap into the magnetic tape medium more than air would (it also prevents the gap filling with rubbed off material from the tape which would have the reverse effect). The flux thus magnetises the tape at that point. A coil of wire wrapped around the core opposite the gap interfaces to the electrical side of the apparatus; thus either supplying a signal in the case of recording, or being fed to an amplifier in the case of playback. The basic head design is fully reversible - a variable magnetic field at the gap will induce an electric current in the coil, and an electric current in the coil will induce a magnetic field in the core and hence in the tape drawn across the gap.

While a head is reversible in principle, and very often in practice, there are desirable characteristics that differ between the playback and recording phases. One of these is the impedance of the coil - playback preferring a high impedance, and recording a low one. In the very best tape recorders, separate heads are used to avoid compromising these desirable characteristics. Having separate heads for recording and playback has other advantages, such as off-tape monitoring during recording, etc.

The width of the head gap is also critical - the narrower the gap, the better the head will be - a narrow gap gives much better transcription in the magnetic domain (the magnetic flux is higher, and hence will give stronger recording for a given signal, or greater signal pickup for a given tape). A narrow gap also permits higher frequency signals to be recorded for a given tape speed. The desirability for a narrow gap means that most practical heads are made by forming a narrow V-shaped groove in the back face of the core, and grinding away the front face until the V-groove is just breached. In this way, gaps of the order of micrometres are achievable.

There are also negative aspects of narrow head gaps, particularly for magnetic recording. The narrower the head gap, the more bias signal must be used to maintain linearity of the signal on tape. This reduces high frequency head room, particularly at lower tape speeds. Manufacturers must find a compromise between intended tape speeds and head gaps for this reason.

The physical design of a head depends on whether it is fixed or rotating. In either case, the face of the head where the gap is must be made hard wearing and highly smooth to avoid excessive tape or head wear. It can also be seen that due to the construction method of the head gap, tape wear will tend to widen the gap, reducing the head's performance over time. The vertical alignment of the heads (the azimuth) must also match between recording and playback for good fidelity, and the gap should be as close to exactly vertical as possible for highest frequency response. Most tape transport mechanisms will allow fine mechanical adjustment of the azimuth of the heads. Sometimes this can be achieved by automatic circuitry - the actual mechanical azimuth adjustment being carried out by taking advantage of the piezo effect of certain types of crystal material.

Play heads as used in video recorders, digital audio tape and other applications are used to achieve a high relative head/tape speed while maintaining a low overall tape transport speed. The wear characteristics of such helical scan heads are even more critical, and highly polished heads and tapes are required. The electrical signals of rotating heads are coupled either inductively or capacitively - there is no direct connection to the head coils.

An erase head is constructed in a similar manner to a record or replay head, but has a much larger gap, or more frequently, two large gaps. The erase head is powered during recording from a high frequency source (usually the same oscillator that provides the AC bias). In some really cheap cassette recorder designs, the erase head is a permanent magnet that is mechanically moved into contact with the moving tape only during recording. Permanent magnet erase heads are also sometimes used in machines that are equipped with AC bias.

Instead of feeding both the bias signal and the audio signal into the same recording head, a few brands of audio tape recorder, notably Tandberg, Akai and its US cousin Roberts, used a separate bias head on the opposite side of the tape from the recording head; this system was termed cross-field.

Record and replay heads are traditionally made of soft iron (the softness is an essential requisite for good record and replay characteristics). This material features extremely good electro-acoustical properties, but unfortunately wears away fairly rapidly with a consequent deterioration of performance. Some higher end recorders featured heads made from ferrite, which features excellent electro-acoustical properties while being a very hard material which resists wear. Its two main disadvantages are that it is brittle and easily damaged, and that it has a much higher noise output due to the Barkhausen effect. In more recent years, more exotic materials have appeared , some involving ceramics, which offer the best of both of the traditional materials.