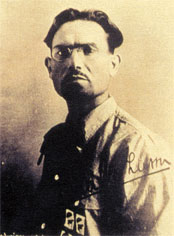 Lussu was born in , () and graduated with a degree in in 1914. Lussu married , a notable , and member of the noble family of the .

Prior to the entry of Italy into , Lussu joined the army and was involved in several skirmishes. As a complementary (N.C.O.) officer of the Brigata in 1916 (the famous Sassari Brigade of the ), he was stationed in . He was in command of the defense of Verona against the Austrian Army. The defense was, at first, victorious but was soon followed by a counter attack (mainly on and ) that lasted until July 1917. The that Lussu observed would serve as an for his later works.

After the war Lussu, together with , founded the Partito Sardo d'Azione (The Sardinian Action Party), that blended social-democratic ideas and Sardinian autonomy. The party took a formal position in 1921, opposing the increasing power of the movement. Lussu was elected to the Italian parliament in 1921 and, in 1924 was among the Aventine secessionists who withdrew from the Italian Parliament after the murder of .

Lussu's anti-Fascist position was, at the time, one of the most radical in Italy. Lussu was physically attacked and injured by unknown aggressors several times. In 1926, during one of these attacks (notably, the same day that suffered an attack in ), Lussu shot one of the "squadristi", in self-defense. He was arrested and tried; and was acquitted. However, he was re-tried by an administrative Fascist commission and sentenced to 5 years of confinement on the island of , near .

In 1929 Lussu escaped from his confinement and reached . There, together with and he formed "Giustizia e Libertà" (Justice and Freedom), an anti-Fascist movement that proposed revolutionary methods to upset the Italian Fascist Regime. While in exile came to be known as "Mister Mills".

In 1938 Lussu's novel "Un anno sull'altipiano" ("A Year on the Plateau"), was published in Paris. This thinly fictional account tells of the lives of soldiers during WWI and the trench warfare they encountered. "Un anno sull'altipiano" underlines, with chill rationalism, how the irrationalities of warfare affected the common man. Gifted with a keen sense of observation and sharp logic, Lussu demonstrates how distant the real life of soldiers is from everyday activities. In a notable passage, he describes the silent terror in the moments preceding an attack, as he is forced to abandon the "safe" protective for an external unknown, risky, undefined world: “All the machine-guns are waiting for us”.

Lussu took part in the civil war in and returned to Italy after the of 1943. Lussu joined the "Resistenza" and became the secretary of "" for southern Italy. He became the leader of the left wing of "Partito d'Azione" and later joined forces with the . After WWII he served as a Minister of Aid in the government of and later as a minor minister in 's government.

In 1964 he separated from the Socialist Party creating the (PSIUP). Ideological differences with the political line of "Partito d'Azione" deepened and Lussu left Sardinia.

Many political meanings have been drawn from Lussu’s works, but his works are perhaps more important at a personal level. Morally and philosophically, Lussu books reflect his need to repent, previously an "interventista" (favorable to entrance in war) and a revolutionary (in "Giustizia e Libertà"); his works soberly describe what war, in its cruelest moments, was like for him.

The alteration of Lussu's opinion of war is quite apparent in the range of his works: first an "interventista", then the author of a manual for revolution, soon after the author of a pacifist book, again a revolutionary and a volunteer in the Spanish civil war. Lussu's consistency has been questioned and political discourse often invades evaluations of his works.