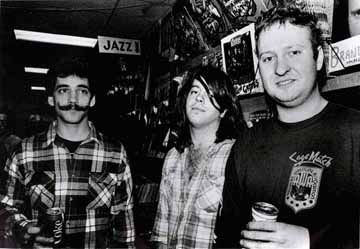 Hüsker Dü was an American band formed in , in 1979. The band's continual members were ist , bassist , and . Hüsker Dü never achieved mainstream success, but attained an influence far larger than its modest sales figures would indicate. Following a series of successful albums, including "" (1984) and "" (1985), the band signed to in 1986, becoming one of the first American underground rock bands to sign with a major record label.

Hüsker Dü first gained notice as a band with thrashing tempos and screamed vocals. The band developed a more melodic musical style as they drifted away from their early sound, helping to develop the early sound in the process. Mould and Hart split the songwriting and singing duties; Mould's lyrics were known for being more soul-searching and intense than the often whimsical and cryptic ones of Hart.

Hüsker Dü broke up in 1987 without achieving a popular breakthrough. Mould formed another band, Sugar, in the early 1990s and has embarked on a solo career on various occasions; Hart and Norton have been less active since Hüsker Dü's demise. Although never experiencing commercial success, Hüsker Dü influenced a number of later and bands, such as the , , , , and .

The group that became Hüsker Dü formed when Bob Mould, Grant Hart, Greg Norton and keyboardist Charlie Pine began playing together in 1979. [Azerrad, Michael. "". Little Brown and Company, 2001. ISBN 0316787531, p. 161] At the time, Mould was a freshman at , and frequented Cheapo Discs a St Paul record store where Hart was a sales clerk. Hart and Norton had originally met while applying for the same job, which Norton eventually got. Hart and Mould bonded over a shared love of , and soon after enlisted Norton and Pine to form a band. They were soon gigging, playing mostly s, some , and frequent Ramones tunes. Unbeknownst to Pine, the remaining bandmembers disliked their sound and began practicing without him, writing a few originals.

They owed their new name to a rather sloppy rehearsal of the ' "". Unable to recall the French portions sung in the original ("qu'est-ce que c'est"), they began shouting any foreign-language terms they could remember, when someone said "Hūsker Dū?", a that had been popular in the 1970s. The term, without the umlauts, means "Do you remember?" in Norwegian and Danish. The group added s to complete the name. Mould reports that they liked "Hüsker Dü"'s somewhat mysterious qualities, which set them apart from other hardcore punk groups with names like "Social Red Youth Dynasty Brigade Distortion". [Azerrad, 2001. p. 161] Mould also reported that while Hüsker Dü enjoyed much hardcore punk in general, they never thought of themselves as exclusively a hardcore group, and that their name was an attempt to avoid being pigeonholed. Hart, Mould, and Norton fired Pine during their first official performance, on March 30, 1979, and continued as a trio.

By 1980 the band was performing regularly in Minneapolis, and their music evolved into a fast, ferocious, primal sound, making them one of the original hardcore punk bands. Through heavy touring they soon caught the attention of punk trailblazers like Black Flag and the ' , which helped introduce Hüsker Dü to new fans. Black Flag guitarist/songwriter later signed the band to his label, .

The band started releasing singles on 's in 1981. Their first two albums, "Land Speed Record" (a live recording) and "", brought much critical praise. Determined touring brought them to the attention of The Minutemen, who released their debut and the "In A Free Land" single on their label, . This, in turn, led to the band signing with SST.

The intense, but varied, "" EP/mini-album was released in 1983. Hüsker Dü's more melodic take on hardcore struck a chord with college students, and various tracks from "Metal Circus", particularly Hart's "Diane," were put into rotation by dozens of stations across the US. [Azerrad, p. 173] In addition, on "Metal Circus" the band showed more invention, skill, and melody than it did over the course of their previous full album "Everything Falls Apart." [ [http://www.allmusic.com/cg/amg.dll?p=amg&sql=10:fifoxq85ldse Review of "Metal Circus on Allmusic.com] ]

The members of Hüsker Dü desired to escape the restrictions of the hardcore genre. In an interview with for his "Matter" column in 1983, singer and guitarist told Albini: "We're going to try to do something bigger than anything like rock & roll and the whole puny touring band idea. I don't know what it's going to be, we have to work that out, but it's going to go beyond the whole idea of 'punk rock' or whatever." [Azerrad, p. 180] The following year, Hüsker Dü recorded the double album "" in 45 hours for the cost of $3,200. [Azerrad, p. 181] "Zen Arcade" is a following a boy who leaves home to face a harsh and unforgiving world. Its artistic and conceptual ambitions were a great stretch, given the purist sentiment then prevalent in U.S. punk rock. "Zen Arcade" received critical praise and significant mainstream music press attention, ending up on several year end best-of lists; it also helped expand the band's audience beyond the punk community. [Azerrad, p. 183] In his review for "Rolling Stone," described "Zen Arcade" as "the closest hardcore will ever get to an opera ... a kind of thrash ""." [cite web | url=http://www.rollingstone.com/artists/huskerdu/albums/album/110848/review/5944241/zen_arcade | title=Rolling Stone: Hüsker Dü: Zen Arcade | accessdate=2007-01-16] SST erred on the side of caution and initially pressed between 3,500 and 5,000 copies of the album, but the record sold out a few weeks into the band's tour to support the record. The album remained out of stock for months afterward, which affected sales and frustrated the band. [Azerrad, p. 182]

During the recordings sessions for "Flip Your Wig" major label approached Hüsker Dü and offered the group a recording contract. The band felt it had hit a sales ceiling that it could break through only with the help of a major label. The promise of retaining complete creative control over its music convinced the band to sign with the label. [Azerrad, p. 190] Mould also cites the distribution problems with SST as a reason for the move, mentioning that there would sometimes be no records to sign when the band would show up for promotional events.

Creative and personal tensions between Mould and Hart had become irresolvable by the release of "Warehouse", and they intensified when Mould began overseeing most of the band's managerial duties following the suicide of manager David Savoy on the eve of the tour in support of the album. In September 2006, Hart told Britain's "Q" magazine, "I take full responsibility for [David's] suicide. It was a direct result of the pressure of working for Bob and me, because he was being forced into a two-faced situation." ["Q", October 2006] Mould also called the suicide "the beginning of the end". The band dissolved after a show in in support of the band's 1987 double album "". Hart was trying to quit heroin using a supply of , but the bottle had leaked. Hart played the show, but Mould and Norton were concerned Hart would soon be suffering from withdrawal and thus would be unable to play the next few shows. While Hart insisted he could perform, Mould had already canceled the dates. Hart quit the band four days later. [Azerrad, p. 194] "The Living End", a live collection taken from the band's final tour, was released after the band's demise.

Mould and Hart have continued making music separately. Both have produced solo albums and formed alternative rock bands, Sugar and , respectively. Mould has also joined in the band . Mould has returned to touring regularly with his solo albums "Body of Song" and "District Line" and is playing Hüsker Dü (as well as Sugar) songs live again. His backup band features several notable musicians, including . Norton formed the short-lived band , played with Shotgun Rationale, and became a chef; he and his wife Sarah own a restaurant in Red Wing, Minnesota called The Nortons'. In addition to his restaurant duties, in 2006 Norton returned to music as bassist for the Minnesota based band The Gang Font, feat. Interloper. The group released an eponymous album in 2007.

Mould and Hart did a brief, unannounced reunion in 2004 at a for ailing bassist (who had been receiving treatment for cancer, and has since died). At the end of what had been scheduled as a Bob Mould solo set, he brought Hart out and the duo played two Hüsker Dü songs, "Hardly Getting Over It" and "Never Talking To You Again". Mould wrote on his blog that the performance was an impromptu, last-minute suggestion by Hart and shouldn't kindle any "false hope" for a reunion. [ [http://modulate.blogspot.com/2004_11_01_modulate_archive.html#110053334529562308 Boblog ] ]

In June 2005, Mould told "Billboard" magazine in an interview that SST had not given the band an accounting of their record and CD sales in several years, and that plans to regain the master tapes from SST and reissue them elsewhere were being held up by business disputes between the former band members.

As the band's career progressed, Hüsker Dü emphasized melody in its songs. Unlike other hardcore bands, Hüsker Dü did not disavow classic rock. "You know the whole deal with tearing down the old to make room for the new?", Hart posited. "Well, music isn't city planning." [Azerrad, p. 169] The band covered 1960s hits like 's "" and ' "" early in its career. As the band members progressed as musicians, they discovered they were able to play at slower tempos while still maintaining the rhythm, which allowed for extended melodies. [Azerrad, p. 185]

Hart and Mould were the band's songwriters. Both wrote their songs separately and at a prodigious pace; in later years Hart accused Mould of making sure his songs comprised no more than 45 percent of the material on an album. [Azerrad, p. 192] Despite the creative friction and their differing individual personalities, the members accommodated each other so that the band could continue to exist. They designed their logo to represent their common train of thought: a circle enclosing three parallel horizontal lines with a vertical line connecting them. The circle symbolized the band, the three lines the individual members, and the intersecting line the common thread of creativity which connected them.

Hüsker Dü is widely regarded as one of the key bands to emerge from the 1980s American indie scene. Music writer asserted in his book "" (2001) that Hüsker Dü was the key link between hardcore punk and the more melodic, diverse music of that emerged. Azerrad wrote, "Hüsker Dü played a huge role in convincing the underground that melody and punk rock weren't antithetical." The band also set an example by being the first band from the American indie scene to sign to a major record label, which helped establish college rock as "a viable commercial enterprise." [Azerrad, p. 159]

Hüsker Dü's sound has been influential on several bands on through the 1990s, including the , , Nirvana, , , and . Green Day frontman has said, " and Hüsker Dü are probably the bands that influenced me the most", particularly in his approach to creating chord progressions. [di Perna, Alan. "Young, Loud & Snotty". "Guitar World". August 1996.]