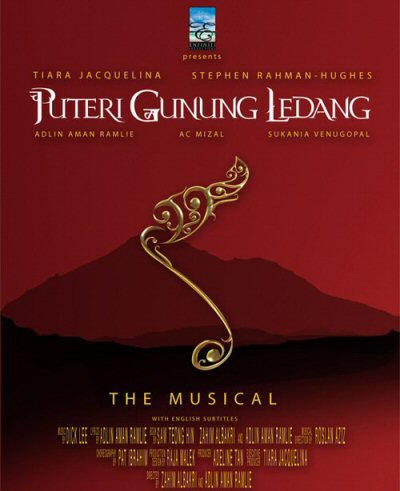 "Puteri Gunung Ledang" is a n musical directed by Zahim Albakri, co-directed by Adlin Aman Ramlie, book by Saw Teong Hin and music composed by . The musical is based on the 2004 "Puteri Gunung Ledang" film, and starred as Gusti Putri and Stephen Rahman-Hughes as Laksamana Hang Tuah. Other members of the production team are music director Roslan Aziz, choreographer Pat Ibrahim and production designer Raja Malek. The musical was staged in poetic Malay and nese-accented Malay, but English subtitles were provided.

Set late in the 15th Century, the musical tells the tale of Gusti Putri, a princess of who falls in love with the n warrior . The pair first meet when a Malaccan entourage arrives in Majapahit, and both are immediately intrigued with the other's charm and intelligence.

and began discussing the idea of a musical version of the Princess of Gunung Ledang story during the development of the film, during which Pat began having meetings with an composer Dick Lee to discuss the idea. The critical and commercial success of the film became the deciding factor for pursuing a stage version. It was decided that the musical version would follow the storyline established by the film, due to audience's familiarity with it, but with a more contemporary feel in order to appeal to younger audience members.

Saw Teong Hin, who directed the film, was invited to write the book. He was later joined by Zahim Albakri and Adlin Aman Ramlie as co-writers. Together with composer Dick Lee, conductor and musician , musician and arts students with , they held a 10-day workshop for the musical, working on the script and songs. Following the workshop, Saw, who had been invited to direct the production, bowed out due a conflicting project. Writers Zahim and Adlin became the director and co-director respectively.

Production designer Raja Malek obtained inspiration from museum exhibits for the look of period and . Raja Malek developed the idea of using s that could be rotated and rearranged to form various parts of the set. The stupas were inspired by "", the oldest remains of Majapahit civilisation that consist of two large pillars on either side of a gateway. The pillars represent the two nese mountains and .

Tiara Jacquelina and Adlin Aman Ramlie, who had portrayed Gusti Putri and Sultan Mahmud in the film, were quickly signed on to reprise their roles in the stage version. , actor and former member of boyband , was cast late into pre-production as Gusti Adipati Handaya Ningrat.

For the other lead role of Hang Tuah, established actor and singer , who had portrayed the character in the film, could not commit to the musical due to other projects. Even with rehearsals in full swing and a confirmed date at the , a replacement had not been found. Eventually, and Dato' (CEO of TV3) recommended , a n-born West End actor, to the production team. Rahman-Hughes signed on to the project in December 2005, barely two months before opening night. The challenge lay in coaching Rahman-Hughes in , a language he was not familiar in.

In the original , Sultan Mahmud of sends his emissary, , to to present his royal proposal of marriage to the mystical Princess of Mount Ledang. The Princess and Hang Tuah are independently famous figures of Malayan history-mythology, and it is only in this specific story that the two briefly cross paths, though in some versions of the tale it is Tun Mamat, not Tuah, who presents the proposal to the Princess directly. The original concept of the "Puteri Gunung Ledang", as pitched by Mamat Khalid, was to pose the question of what would happen if these two characters had met and fallen in love.

In the original story, the Princess is mysterious and magical, hinting that she is supernatural in origin. In contrast, the stage musical followed the precedent set by the film by making the Princess a mortal human being, and uses the unique creation of the love affair between her and Tuah as the reason she decides to live on Mount Ledang. In order to set up the Princess as a mortal princess, the empire was chosen as her kingdom of origin. At the time of Sultan Mahmud’s rule, the empire was a powerful neighbour of . The Princess was set up as the younger sister of the Adipati (King) of at that time.

is an actual n historical figure, but his career as a Laksamana (Admiral) began during the reign of Sultan Mansur, who was Sultan Mahmud’s grandfather. By the time Sultan Mahmud became ruler of Malacca, Hang Tuah was an old man at the end of his life. However, the musical opts to show Tuah as still being in his prime of his career, though the age gap between him and the Princess is acknowledged by a line in the show when the Princess remarks that she was a child when she saw the famous Admiral Tuah for the first time.

The original legend centres on the Princess’ response to Sultan Mahmud’s proposal. During the time of the old Malay the were believed to have ‘daulat’, a divine right bestowed from God that gives them absolute power over the land and its people. It is because of this that the Princess, though she was not interested in his proposal, did not refuse him outright. Instead she set for him seven impossible tasks for him to fulfil, but Sultan Mahmud was either too proud or too blind to realize that the tasks were her way of turning him down, and when he attempted to fulfil them Malacca fell into ruin.

The musical instead focuses on the love story between the mortal characters of the Princess and Tuah. The seven impossible tasks are only briefly mentioned towards the end of Act 2, near the finale.

Due to the romantic nature of the reinterpreted story, the finale was made bittersweet, with Sultan Mahmud cursing the Princess to live forever on Mount Ledang alone. In the original legend, the Princess was never condemned by a curse, and it is Sultan Mahmud who ultimately suffered by trying to fulfil her seven conditions. Historically, Sultan Mahmud was the last Sultan of Malacca, and at the end of his reign had to flee from his city, thus ending the Malaccan Sultanate. This Sultan Mahmud is sometimes confused with his great-grandson, Sultan Mahmud II, who was assassinated on his royal dais.

The musical’s reinterpreted love story of Tuah and the Puteri bears similarity to the love story between Tuah and . As chronicled in "Hikayat Hang Tuah" and other sources, was a beautiful princess from . Sultan Mahmud heard of her beauty and sent Tuah as his emissary to present to her his royal proposal of marriage. Upon meeting Tuah, Tun Teja fell in love with him, and in some versions Tuah reciprocated her feelings. Ultimately, Tuah placed his loyalty to Sultan Mahmud above his personal emotions.

The "Puteri Gunung Ledang" film acknowledges the existence of Tun Teja, who in that version is already Sultan Mahmud’s wife and the mother of the crown prince Raja Ahmad. The musical omits Tun Teja completely.

The musical first ran at the from February 10 to 24, . The enthusiastic response both critically and commercially lead to a second season being announced before the first season had been completed. The second season ran at the same venue from August 6 to 21, , and featured supporting cast replacements, slight changes in the set-up and dialogue along with more sophisticated props.

The musical had an international run when it was performed in , from November 24 to 26, 2006 in conjunction with Pesta Raya (Malay Festival of Arts). The tickets were declared sold-out a month prior to the performance, prompting the organisers to create an extra matinee performance on the November 25, 2006.

A special performance of the musical was staged in April 2008 to celebrate the opening of the East Ledang resort in ,

The musical was critically and commercially successful, earning praise from critics for the reinterpretation of the legend of Mount Ledang.