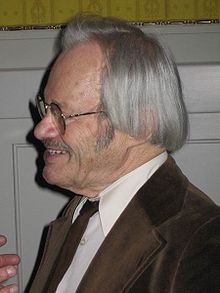 Friedrich Cerha (born 17 February 1926) is an Austrian composer and conductor.

Cerha was born in Vienna.

He received his education at the Viennese Music Academy (violin, composition, musician drawing) and at the University of Vienna (music sciences, German culture and language, philosophy). In 1958 he, together with Kurt Schwertsik, created the ensemble "die reihe", which was an important instrument for the spreading of contemporary music in Austria. Apart from his compositions, Cerha widely earned a reputation as an interpreter of the works of Alban Berg, Arnold Schoenberg and Anton Webern; his affinity for the works of the second Viennese school culminated in the completion of Alban Berg's opera Lulu by finishing the instrumentation of the 3rd act and filling the gaps in the score (premiered by Pierre Boulez in Paris, 1979).

In April 2006, Friedrich Cerha joined the Joseph Marx Society. With a group of contemporaries such as Kurt Schwertsik and Peter Vujica, he was also involved in the establishment of this society. This special commitment for Joseph Marx, who has represented the tonal music of Austria as an influential composer, teacher and critic, underscores Cerha's renown as an undogmatic artist who supports every kind of significant musical rediscovery regardless of its reference to tonality or modernism.

Cerha is still active as a composer of orchestral works and stage music (among others, Baal, The Rattenfänger, and Der Riese vom Steinfeld, the latter commissioned by the Vienna State Opera, with a libretto by Peter Turrini). Premiere performances of some of his recent works took place in January 2006 (e.g. Impulse for large orchestra, dedicated to the Vienna Philharmonic Orchestra on the occasion of its 150th anniversary) as well as in March 2006 (Concerto for Soprano Saxophone and Orchestra, written in 2004). In Austria, Cerha is generally accepted as the leading contemporary composer of that country[citation needed].