General Dynamics Corporation (NYSE: GD) is a U.S. defense conglomerate formed by mergers and divestitures, and as of 2008 it is the fifth largest defense contractor in the world.[3] Its headquarters are in West Falls Church (previously Jefferson), unincorporated Fairfax County, Virginia, in the Falls Church area.[4][5][6]

The company has changed markedly in the post-Cold War era of defense consolidation. The company has four main business segments: Marine Systems, Combat Systems, Information Systems and Technology, and Aerospace. The company's former Fort Worth Division manufactured the F-16 Fighting Falcon, the most-produced Western jet fighter, but that subsidiary was sold to Lockheed in 1993. GD reentered the airframe business in 1999 with their purchase of Gulfstream Aerospace. 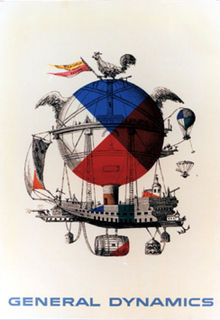 Poster by Erik Nitsche from 1960

General Dynamics traces its ancestry to John Philip Holland's Holland Torpedo Boat Company. This company was responsible for developing the U.S. Navy's first submarines built at Lewis Nixon's Crescent Shipyard, located in Elizabethport, New Jersey. The revolutionary submarine boat Holland VI was built there, its keel being laid down in 1896. Crescent's superintendent and naval architect, Arthur Leopold Busch, supervised the construction of this submarine. After being launched on 17 May 1897, it was eventually purchased by the Navy and renamed USS Holland. The Holland was officially commissioned on 12 October 1900 and became the United States Navy's first submarine, later known as SS-1. The Navy placed an order for more submarines, which were developed in rapid succession and were assembled at two different locations on both coasts. These submarines were known as the A-Class or Adder Class, and became America's first fleet of underwater craft at the beginning of the 20th century.

Due to the lengthy and expensive process of introducing the world's first practical submarines, Holland, short on funds, had to part with his company and sell his interest to financier Isaac Leopold Rice, renaming the new firm as the Electric Boat Company on 7 February 1899. Holland effectively lost control of the company and found himself earning a salary of $90 a week as chief engineer, while the company he founded was selling submarines for $300,000 each.[citation needed] Holland resigned from the company effective April 1904. Rice became Electric Boat's first President, remaining there from that time until 1915 when he stepped down just prior to his death on 2 November 1915.

Electric Boat gained a reputation for unscrupulous arms dealing in 1904-05, when it sold submarines to Japan's Imperial Japanese Navy and Russia's Imperial Russian Navy, who were then at war.[citation needed] Holland submarines were also sold to the British Royal Navy through the English armaments company Vickers, and to the Dutch to serve in the Royal Netherlands Navy. The new pioneering craft (originally) developed by the company was now legitimized as genuine naval weapons by the world's most powerful navies.

In the post-World War II wind-down, Electric Boat was cash-flush but lacking in work, with its workforce shrinking from 13,000 to 4,000 by 1946.[citation needed] Hoping to diversify, the president and chief executive officer, John Jay Hopkins, started looking for companies that would fit into Electric Boat's market.

They quickly found that Canadair, owned by the Canadian government, was suffering from similar post-war malaise and was up for sale. Hopkins bought the company for $10 million in 1946. Even by the Canadian government's calculations, the factory alone was worth more than $22 million,[citation needed] excluding the value of the remaining contracts for planes or spare parts.

When they purchased Canadair, its production line and inventory systems were in disorder. Hopkins hired Canadian-born mass-production specialist H. Oliver West to take over the president's role and return Canadair to profitability. Shortly after the takeover, Canadair began delivering its new Canadair North Star (a version of the DC-4), and was able to deliver aircraft to Trans-Canada Airlines, Canadian Pacific Airlines and British Overseas Airways Corporation (BOAC) well in advance of their contracted delivery times.[citation needed]

As defense spending increased with the onset of the Cold War, Canadair would go on to win many Canadian military contracts for the Royal Canadian Air Force, and became a major aerospace company. These included Canadair T-33 trainer, the Canadair Argus long-range maritime reconnaissance and transport aircraft, and the Canadair F-86 Sabre. Between 1950 and 1958, 1,815 Sabres were built. Canadair also produced 200 CF-104 Starfighter supersonic fighter aircraft, a licensed-built version of the Lockheed F-104.

In 1976 Canadair was sold back to the Canadian Government, which sold it to Bombardier Inc. in 1986.

As the aircraft production at Canadair became increasingly important to the company, Hopkins argued that the name "Electric Boat" was no longer appropriate. On 24 April 1952 the name was officially changed to General Dynamics.[7]

General Dynamics was still cash-flush after the Canadair purchase, and, given the success of that company, they continued to look for new aviation purchases.[citation needed] In March 1953 they purchased Convair from the Atlas Group.[7] The sale was approved by government oversight with the proviso that General Dynamics would continue to operate out of Air Force Plant 4 in Fort Worth, Texas. This factory was set up in order to spread out strategic aircraft production and rented to Convair during the war to produce B-24 Liberator bombers. Over time, the Fort Worth plant would become Convair's major production center.[citation needed]

As was the case with Canadair, Convair worked as an independent division within the General Dynamics umbrella. Over the next decade the company introduced the F-106 Delta Dart Interceptor (the earlier F-102 Delta Dagger being designed before the takeover), the B-58 Hustler and the Convair 880 and 990 airliners. Convair also introduced the first U.S. operational intercontinental ballistic missile, the Atlas.

Naish left in May 1961, taking most of Convair's top people with him. GD subsequently reorganized into Eastern Group in New York and Western Group in San Diego, California, with the latter taking over all of the aerospace activities and dropping the Convair brand name from its aircraft in the process.[citation needed]

Frank Pace retired under pressure in 1962 and Roger Lewis, former Assistant Secretary of the Air Force and Pan American Airways CEO was brought in as the new CEO. The company recovered then fell back into the same struggles. In 1971, the board brought in Dave Lewis (no relation) as Chairman and CEO. At the time he was President of McDonnell Douglas. Dave Lewis served until his retirement in 1985.

During the early 1960s the company bid on the United States Air Force's TFX (Tactical Fighter, eXperimental) project for a new low-level "penetrator". Robert McNamara, newly installed as the Secretary of Defense, forced a merger of the TFX with U.S. Navy plans for a new long-range "fleet defender" aircraft. In order to bid on a naval version successfully, GD partnered with Grumman, who would build a customized version for aircraft carrier duties. After four rounds of bids and changes, the GD/Grumman team finally won the contract over a Boeing submission.

The F-111 first flew in December 1964. The F-111B flew in May 1965, but the Navy said that it was too heavy for use on aircraft carriers.[citation needed] With an unacceptable Navy version, estimates for 2,400 F-111s, including exports, were sharply reduced, but GD still managed to make a $300-million profit on the project. Grumman went on to build the F-14 Tomcat, an aircraft that used many of the innovations of the F-111, but designed solely as a carrier-borne fighter.

In May 1965, GD reorganized into 12 operating divisions based on product lines. The board decided to build all future planes in Fort Worth, ending plane production at San Diego (Convair's original plant), but continuing with space and missile development there. In October 1970, Roger Lewis left and David S. Lewis from McDonnell Douglas was named CEO. Lewis required that the company headquarters move to St. Louis, Missouri, which occurred in February 1971.[citation needed]

In 1972, GD bid on the USAF's Lightweight Fighter (LWF) project. GD and Northrop were awarded prototype contracts. GD, whose F-111 program was winding down, desperately needed a new aircraft contract. They organized their own "Skunk Works" group, the Advanced Concepts Laboratory, and responded with a new aircraft design that incorporated more modern equipment than the Northrop contender, mainly fly-by-wire flight controls.[citation needed]

GD's YF-16 first flew in January 1974, and proved to have slightly better performance than the YF-17 in head-to-head testing. It entered production as the F-16 in January 1975 with an initial order of 650 and a total order of 1,388. The F-16 also won contracts worldwide, beating the F-17 in foreign competition as well. F-16 orders eventually totaled more than 4,000, making it the largest and most successful program for GD, and one of the most successful western military projects since World War II.

Henry Crown, still GD's largest shareholder, died on 15 August 1990. Following this, the company started to rapidly divest its under-performing divisions under CEO William Anders. Cessna was re-sold to Textron in January 1992, the San Diego missile production to General Motors-Hughes Aerospace in May 1992, the Fort Worth aircraft production to Lockheed in March 1993 (a nearby electronics production facility was separately sold to Israeli-based Elbit Systems, marking their entry into the United States market), and its Space Systems Division to Martin Marietta in 1994. The remaining Convair Aircraft Structure unit was sold to McDonnell Douglas in 1994. The remains of the Convair Division were simply closed in 1996. GD's exit from the aviation world was short-lived, and in 1999 the company acquired Gulfstream Aerospace.

Having divested itself of its aviation holdings, GD concentrated on land and sea products. GD purchased Chrysler's defense divisions in 1982, renaming them General Dynamics Land Systems. In 2003 they purchased the defense divisions of General Motors as well. It is now a major supplier of armored vehicles of all types, including the M1 Abrams, LAV 25, Stryker, and a wide variety of vehicles based on these chassis.

General Dynamics Land Systems was hurt by the cancellation of the US Army's Future Combat Systems program and the loss in the MRAP-All Terrain Vehicle competition.[citation needed]

On August 19, 2008, GD agreed to pay $4 million to settle a lawsuit brought by the US Government claiming a GD unit fraudulently billed the government for defectively manufactured parts used in US military aircraft and submarines. The US alleged that from September 2001 to August 2003 GD defectively manufactured or failed to test parts used in US military aircraft, such as the C-141 Starlifter transport plane. The GD unit involved, based in Glen Cove, New York, closed in 2004.[8]

Electric Boat was established in 1899. 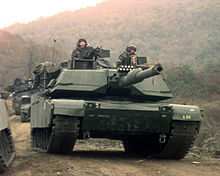 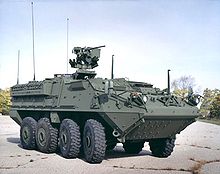 Information systems and technology represent 34% of the company's revenue.[25]

General Dynamics has about $30 billion in sales, primarily military, but also civilian with its Gulfstream Aerospace unit and conventional shipbuilding and repair with its National Steel and Shipbuilding subsidiary.

In 2004 General Dynamics bid for the UK company Alvis Vickers, the leading British manufacturer of armored vehicles. In March the board of Alvis Vickers voted in favor of the £309m takeover. However at the last minute BAE Systems offered £355m for the company in what was seen as a move to keep General Dynamics out of its "back yard".[citation needed] This deal was finalized in June 2004.

General Dynamics has tried to acquire Newport News Shipbuilding but been blocked by regulators and competitors, as this would make General Dynamics the sole manufacturer of nuclear-powered ships in the United States.[citation needed]

Controlled subsidiaries of the corporation are donors to the Canadian Defence and Foreign Affairs Institute.[27]